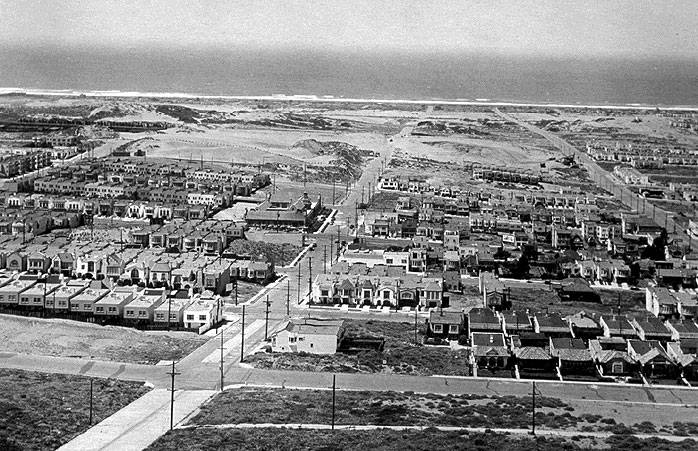 The Sunset District is a largely single family residential area built during the 1920s and '30s as an early San Francisco suburb. Sand dunes covered the land stretching from the west side of Twin Peaks to the ocean prior to the completion of the Twin Peaks Tunnel in 1917. Initial building began at the foot of the Haight area and spread west to the dunes. After the opening of the Cliff House, rails were laid through the district to connect the beach and Cliff House with other parts of the City.

The incorporation of Golden Gate Park clearly defined the northern border of the Sunset and as a result development worked south from the park's border. The 1920s saw the perfection of mass housing techniques. The Sunset best exemplified this type of building with rows of neatly identical housing stretching for blocks.

The first residents in the Sunset were immigrants from Western Europe. However, during the 1960s many of them were growing older and sold their homes; this resulted in a huge influx of middle class Chinese and Japanese immigrants. Today the European influences remain visible within the neighborhood, but most of the main commercial area supports the large Chinese population.