As part of FDR’s New Deal, the Works Progress Administration (WPA) was created to boost employment across the country by having citizens carry out federally funded public works projects. San Francisco is home to some of the most beautiful and iconic murals that came from that era, such as those found at the Beach Chalet or Coit Tower. Perhaps the biggest hidden treasure from this time are the forgotten murals painted by Helen Forbes and Dorothy Puccinelli in the Mother’s Building of the San Francisco Zoo. Not only do the murals beautifully depict the story of Noah’s Ark, the crucial role that gender plays in their history makes them a legacy for 20th century women in San Francisco. 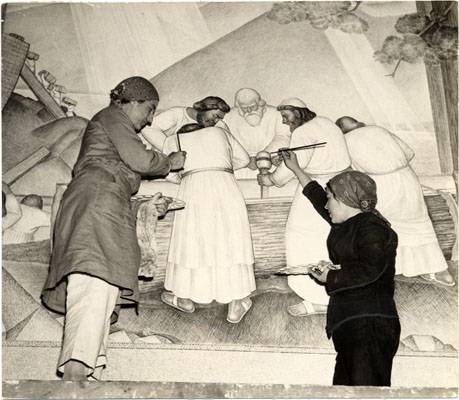 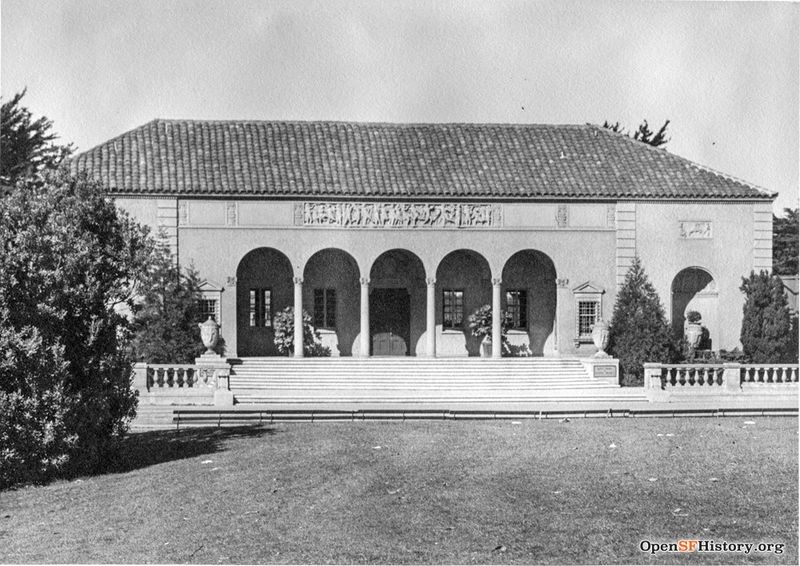 From the beginning, the location of the Puccinelli and Forbes’ murals represented a uniquely feminine place in San Francisco. The Mother’s Building, as it was termed, was donated in 1925 by Herbert and Mortimer Fleishhacker in honor of their mother – the purpose being to serve as a lounge for women while their children played in the accompanying pool and playground (Lee 2016). Since the building opened its doors, it provided amenities such as water, milk, and medical advice for its female guests, while restricting access to any males older than six (Wardle 2005). 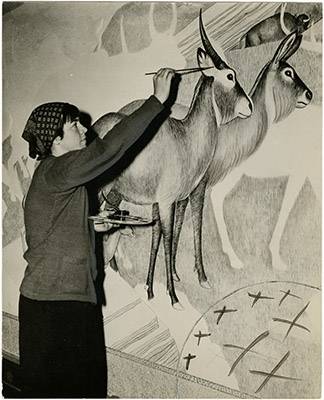 About a decade later, when the WPA began commissioning art, it saw the empty walls of the Mother’s Building as an ideal location for a project. Until that point, the majority of WPA contracts went to men – in fact, of the 26 Coit Tower muralists, only 5 were women (Rothman 2017). In this regard, the Mother’s Building is unique: the WPA awarded the contract to Dorothy Puccinelli and Helen Forbes, two female artists. Originally from Texas, Dorothy Puccinelli moved to San Francisco at a young age and studied with Beniamino Bufano at the Rudolph Schaeffer School of Design (Puccinelli 1975). Ironically, even though she felt that murals were a mistake because of their immobility, she ultimately became a prominent mural painter during the 1930’s (Puccinelli 1975). Helen Forbes, a native San Franciscan, studied at the San Francisco Art Institute before traveling to Mexico and then settling down for a period at the Academy of Fine Arts in Berlin. After traveling the world, she came back to San Francisco in the late 1920’s and implemented her international influences during her stint as a WPA muralist (Pucinelli 1975). 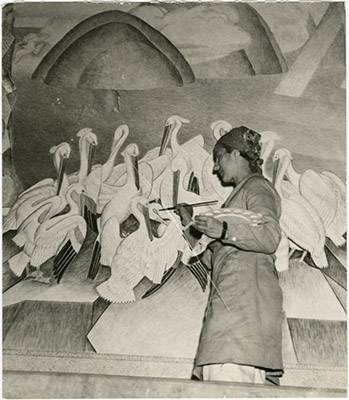 The original contract given to Forbes and Puccinelli from the WPA was only to paint the 4 lintels above the doors. In an interview with UC Berkeley, Puccinelli remembers wanting to “parlay this [project] into something bigger.” (Puccinelli 1975) She and Forbes “set to and made designs for the whole place” instead of just the lintels, and were notably able to sell their idea to the famed architect behind the Mother’s Building, George Kelham. To further add to the female perspective found in the Mother’s Building, the WPA had sisters Margaret, Helen, and Esther Bruton create a mosaic of Saint Francis of Assisi, San Francisco’s namesake, to complement the murals (Kelly 2016). To characterize that era for female muralists, Puccinelli remembers that if they “gave us an inch, we’d take a mile” (Puccinelli 1975). The ambition and power these female artists held, and the fact that all the artists that led the projects were women may be seemingly fitting for the Mother’s Building, but was still unusual for the time (Sewell 2011). Part of this female prominence can be attributed to pivotal events like the suffrage movement that had made its mark on San Francisco just years before the WPA; without these moments, it is possible that Forbes and Puccinelli would not have had this opportunity.

Another interesting contextual aspect of the murals is their surprising lack of political influence. Due to the politically turbulent times the country was under when the WPA was funding projects, many of the murals from that time show strong political nuances and were met with serious backlash from citizens. For example, the Coit Tower murals include Marxist references that were not taken lightly by the public when they were first displayed. Many claim the source of this political influence comes from the most famous muralist of the time, Diego Rivera (Rothman 2017). It seems that wherever Rivera went, politically charged art followed.

Interestingly, the Mother’s Building murals show the opposite – peaceful animals telling the story of Noah’s Ark. That is not to say that Puccinelli and Forbes were not influenced by Rivera. In fact, Puccinelli learned how to initially paint murals from Diego Rivera. Rivera worked in the studio next to Puccinelli and she “went over there from time to time, and sort of spent a lot of time watching him” (Puccinelli 1975). Despite this, there were no overt political references on the murals. That being said, the symbolic role that animal imagery played in San Francisco art during the 1930’s may help explain Puccinelli and Forbes’s choice to paint Noah’s Ark. For example, Beniamino Bufano, Puccinelli’s mentor from art school, and his animal-based sculptures demonstrated that the image of innocent creatures being saved from disaster had tremendous meaning during this time. Here at the Mother’s Building, a similar story can be told. The depiction of Noah’s Ark, and the connotation of salvation and innocence that comes with it, could be symbolic of the Mother’s Building itself – a refuge for innocent children and their mothers. 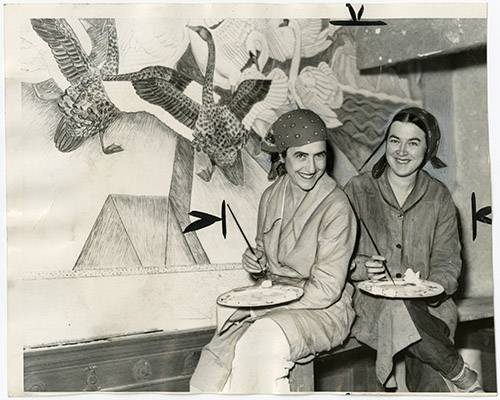 From an artistic perspective, and unlike most WPA-era murals that were frescos, Forbes and Puccinelli’s artwork is egg-tempera based; the murals were, at the time, the largest of their kind in the world (Donahue 2007). Each of the four walls of the Mother’s Building tells a part of the story of Noah’s Ark: the north wall describes the building of the ark; the west wall, the loading of the animals; the south wall, the landing; the east wall, the disembarking of the animals (Donahue 2007). Unfortunately, due to the isolated coastal location of the Mother’s Building and the San Francisco Zoo, the salt water and its moisture have taken a toll on the murals, especially on the West wall (seen below), and the Mother’s Building has been closed to the public since 2002.

Furthermore, the structural safety of the building is compromised and requires seismic retrofitting. It is interesting to note that the majority of the buildings that house murals from this era were not originally built for this purpose. Other locations such as Beach Chalet and Coit Tower faced similar situations of deteriorating art work, but, through grassroots movements, were able to raise the money necessary to restore the murals to the public. Unfortunately, the Mother’s Building murals have not had their moment yet. Richard Rothman, a former San Francisco government worker, is leading the fundraising and awareness effort. Due to the geographically marginalized location of the building, however, it is hard to publicly advertise these beautiful murals. Rothman was able to photograph the murals and is currently holding an exhibit at the McLaren Lodge in Golden Gate Park. Just from an initial look at these photographs, it is clear that the talent and artistic thought that went into producing these murals is enough to make them worth saving. Below is a picture of the South Wall showing the landing of the ark.

An initial damage report shows an estimated $5 million to cover the retrofitting and restoration costs. Most recently, District 4 Supervisor Katy Tang was able to secure $400,000 for a second phase of the report and to begin work on the restoration. Rothman originally got involved because “nobody is doing anything about it,” but he is optimistic that throughout the last few years he has connected the necessary people to make this happen, and that the Mother’s House murals will ultimately be restored.