Making a Stink About the SF Zoo 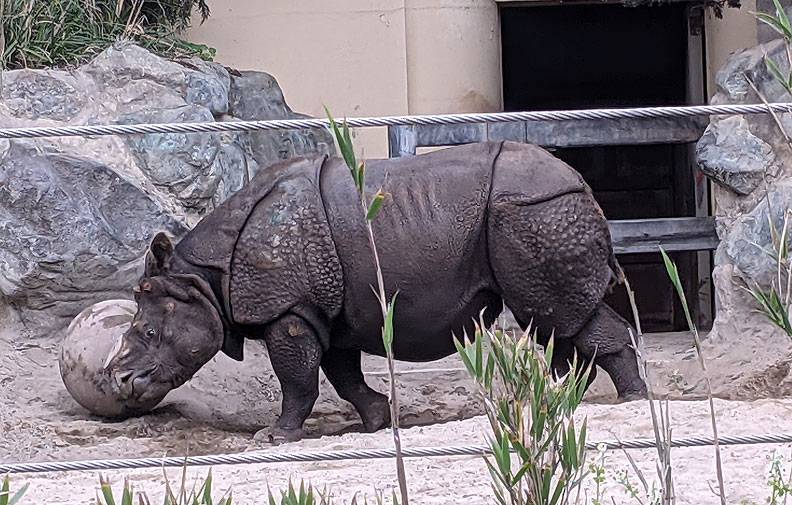 A rhinoceros playing with a ball at the San Francisco Zoo, February 2021.

One midnight shift in the mid-1970s when I was on patrol as a California State Police sergeant with one of the officers I was supervising that fateful evening, we stumbled on one of those deeds.

We had just checked the California National Guard Armory at Fort Funston. It was one of the properties that belonged to the State of California in our patrol area, and we found it appropriately secure. There was literally no traffic out at that time of night in that area.

Probably headed for lunch at one of the all-night restaurants in town, like the Copper Penny, we passed by the side entrance to the San Francisco Zoo just as a truck pulled out. The traffic light turned red, so we pulled up behind the truck. It was a dump truck, and we assumed that there was a late-night paving project going on or something.

It wasn't a cold night, and we had the windows down. That turned out to be a near-fatal mistake.

Within seconds, we didn't know if we had been Maced, dosed with LSD, or attacked with nerve gas! Our eyes teared up, our throats constricted and our stomachs wanted to empty themselves through our ears.

We remained at the light as the truck pulled away, and soon our senses returned. We followed the truck at a safe distance, about fifty yards. When the truck made a turn, we saw the SF Zoo logo on the door and realized what had happened.

Monkeys, apes, tigers, elephants, lemurs, anteaters, and their other pals at the zoo all poop. Someone has to clean it out of the cages, and what is cleaned out has to be hauled somewhere where it can be composted or otherwise disposed of. That unfortunate duty was given to the driver of that truck.

The mélange of zoo poo was so intense that we had to back off another thirty or forty yards. We had no idea where that truck was headed, but we understood why it had to be done in the dead of night.

Everyone enjoys watching the animals at a zoo, but few think about all of the people who are behind the scenes who have to do things most of us can't imagine. My partner and I suddenly had a new appreciation for the people whose day begins when the zoo closes. The zoo couldn't open its doors to the public without them.

We just wished they had a "Keep Back 500 Feet" sign on the back of the truck.

If memory serves, we postponed lunch for a bit.