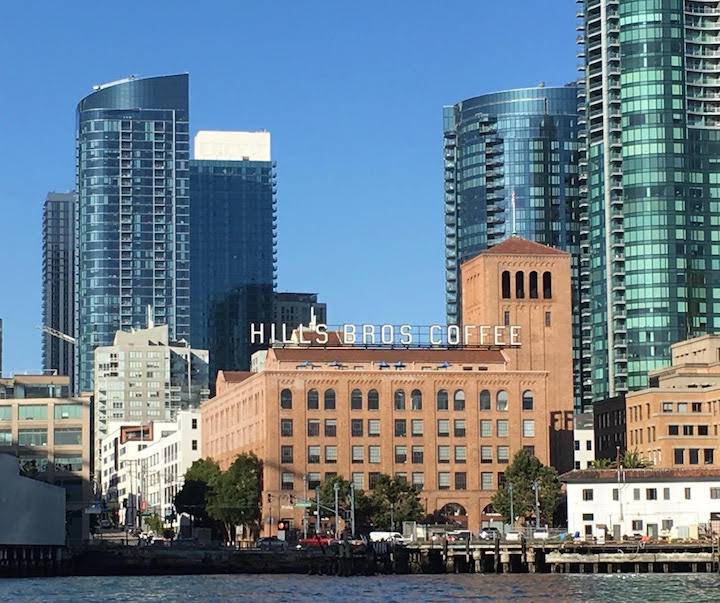 The Hills Bros. Coffee building as seen from a rowboat on San Francisco Bay.

I worked at Hills Bros. Coffee at 2 Harrison Street for five years during the 1980s. I started out as an analyst in the Market Research department and, after about two years, moved into the Marketing department as a Product Manager. The company was still roasting, grinding, and packing coffee in the Romanesque Revival-style brick building that still stands. The building predates the Oakland-Bay Bridge by about ten years and sits hunkered down almost underneath the western terminus. When I worked there the old Embarcadero freeway cut off the waterfront and ruined the view. Bayside land around there was so cheap, a good portion of it was devoted to free parking in untidy lots. Today the Embarcadero is a lovely bayfront esplanade and the freeway is long gone.

Hills Bros. as a San Francisco-based coffee roaster and packer is gone too and the stately brick building it once occupied is now a mix of offices and retail called Hills Plaza. The original tower, where the imported coffee beans were stored, still rises above the building’s roof. From the tower, gravity blended the varied beans. Roasting ovens and packing lines were on the floors below. When I started working at the plant, the production line ran at least one shift, maybe two. You could smell the coffee roasting as you came into the City where Bay Bridge traffic backed up near the Fremont Street exit. The smell was slightly harsh and maybe a bit burnt because Hills Bros. mostly roasted robusta beans. (You could get more coffee out of fewer beans with robustas and just as much, if not more, caffeine.)

Hills Bros. as a brand did fairly well in San Francisco. All the local supermarkets, including the now-defunct Cala stores, carried it. Hills Bros. was the number-one coffee brand in Chicago for years. The company did a lot of market research surveys in Chicago and a lot of focus groups there to test advertising. At that time, all the major coffee brands ran lots of TV commercials. And lots of coupons in the Sunday newspaper supplements.

Hills Bros.’ ad agency was in Los Angeles on Wilshire Blvd. and had a few Wells, Rich, Greene agency alums who’d made their name with Alka-Seltzer commercials (“I can’t believe I ate the whole thing”). In those days, Peet’s was just a shop in Berkeley and Starbucks had cafes on only a few Seattle street corners. Yuban was the high-end brand and Colombian coffee was considered top-notch. Hills Bros. introduced “Gold” to counter Yuban and the Colombian mystique. It was a short-lived brand.

To get to work, I rode the F bus from the East Bay to the old Transbay Terminal and walked the few blocks from there to the factory. The Ferry Building was on the other side of the old freeway; it was an almost-empty white elephant at that time. But it had the rather grandiose-named World Trade Center inside, to which Hills Bros. was a member. The guys in the Sales Department often went over there for lunch. At the World Trade Center when you ordered a drink, the servers, uniformed in black vests and trousers and long white aprons, brought you two.

Another popular lunch spot nearby was The Boondocks, a bar/restaurant also on the other side of the freeway, along the water. It is now called the Hi-Dive. The Boondocks didn’t have much in the way of food but on Tuesdays the female wait staff were required to wear only lingerie as they worked. This was the weekly “lingerie show” and it went on for a number of years.

The Hills family had sold the business in 1976 — to a consortium of South American coffee producers. They in turn sold it to a group of local managers/investors who ran the company for the next few years. What little coffee production was left ceased in the second half of the 1980s and Nestlé bought the Hills Bros. brand name at that point. I am not sure if Hills Bros.’ bayfront real estate was a part of the Nestlé deal. Even then, the building and its location were probably worth a lot more than the canned coffee business. In a few years, the earthquake of 1989 would hit, the freeway would come down, and what had been a factory would find itself in the forefront of a transformed Embarcadero.