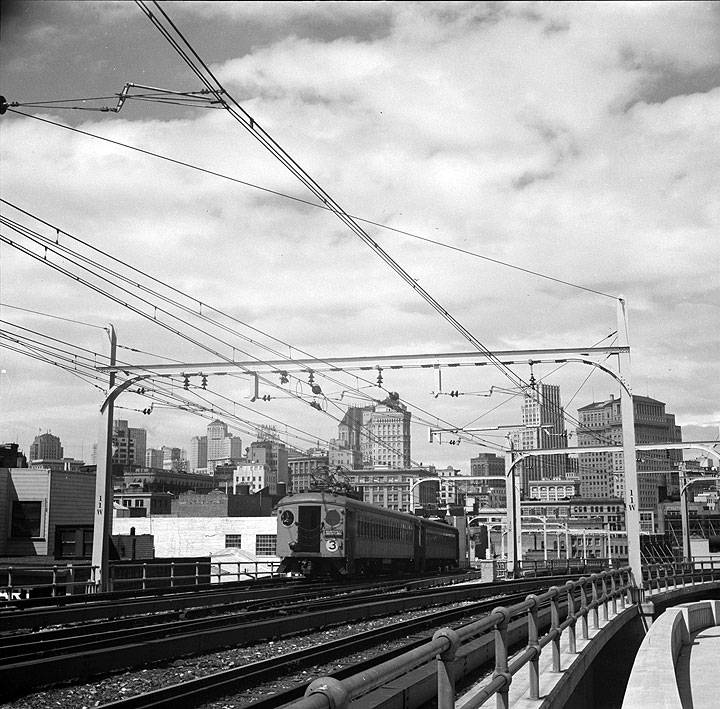 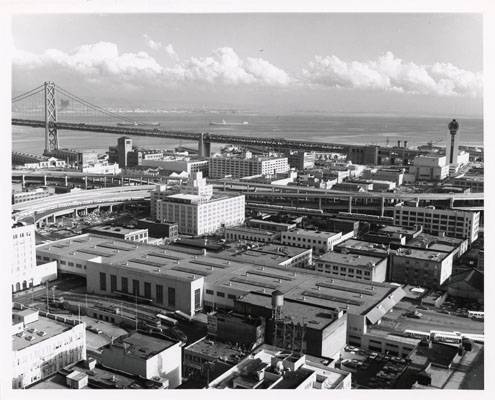 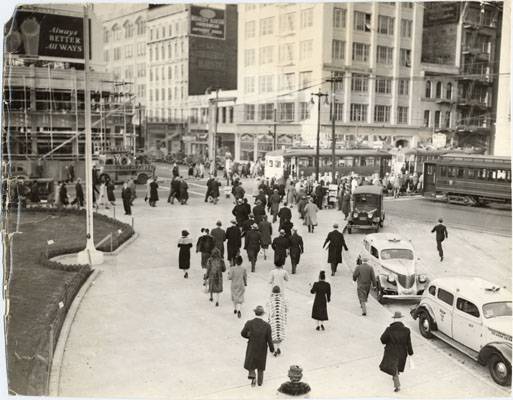 San Francisco’s Transbay Terminal was built in 1939 at 1st and Mission Streets as a California Toll Bridge Authority facility in order to facilitate commuter rail travel across the lower portion of the San Francisco-Oakland Bay Bridge. It was paid for by Bay Bridge tolls, which were then 50 cents per automobile. At the time, the lower deck of the Bay Bridge was not only used for automobile travel, but also hosted two rail tracks on the south side. The rail portion was run principally through the Key System.

The Terminal was designed to handle as many as 35 million people annually with a peak 20-minute rate of 17,000 commuters that were transported in 10-car trains at headways of 63.5 seconds. In its heyday at the end of World War II, the terminal’s rail system was transporting 26 million passengers annually. After the war ended and gas rationing was eliminated, the Terminal’s use began to steadily decline to a rate of four to five million people traveling by rail per year. In 1958, the lower deck of the Bay Bridge was converted to automobile traffic only, the Key System was dismantled, and by 1959, the inter-modal Transbay Terminal was converted into a bus-only facility, which it currently is today. (from the Transbay Center website) 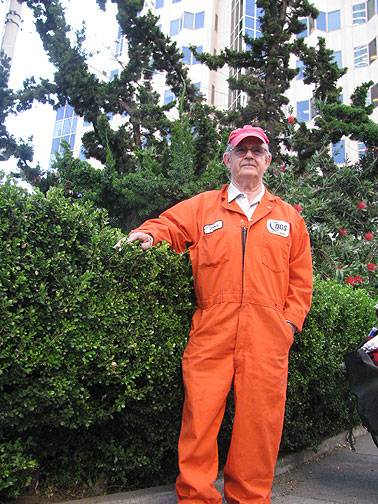 Stephen O'Brien has been coaxing an oasis out of a most unlikely environment for a long time: the small green patches at either end of the ground level Mission Street frontage of the Transbay Terminal. He started back in 1958, when the old Key System train tracks that used to bring East Bay electric streetcars to the Transbay Terminal were being torn out. The Transbay Terminal in those days was a crucial commuter hub, bringing passengers from all over the East Bay. If you've ever ridden the F bus from Berkeley to San Francisco, you've ridden on the descendant of the same-lettered streetcar that once transported you from downtown Berkeley to downtown San Francisco just a minute longer than BART does today!

O'Brien is having his last day working his gardens at the Transbay Terminal today. His company's contract with Caltrans has ended, and he has been transferred to the State Building or the PUC building grounds. He's almost 80 years old and if he doesn't like his new posting, he'll probably retire soon. It'll be hard to match the half century he's spent cultivating the quiet, almost invisible oases at the Transbay Terminal. I heard about O'Brien from my friend Susanne Zago:

"Every morning I step out of the Transbay Terminal, one of the ugliest places I've ever been, and I notice this small green space as I leave. Sometimes it was completely trashed, but the next day I'd look in and it would be restored to its pristine condition. I looked at the trees, surprisingly mature, wondering what was planned for them as they build the new Transbay Center. I started asking around, and no one knew. One day I met this man who was in the space and it turned out to be Stephen." 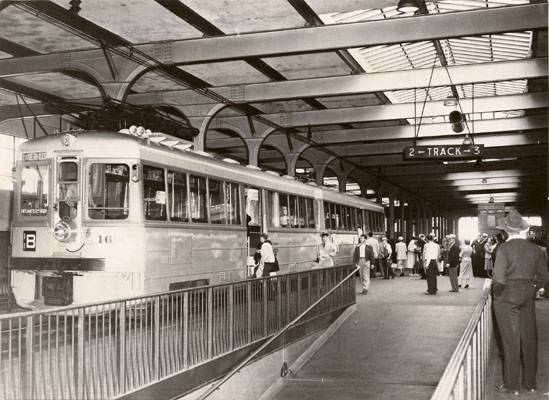 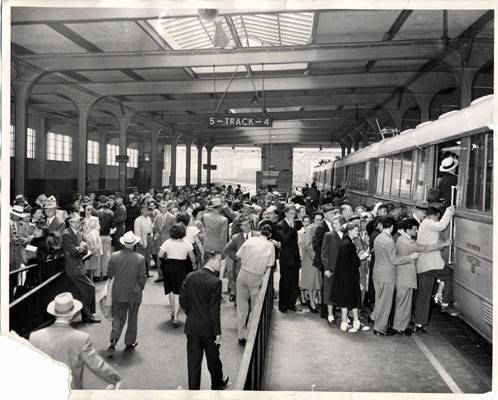 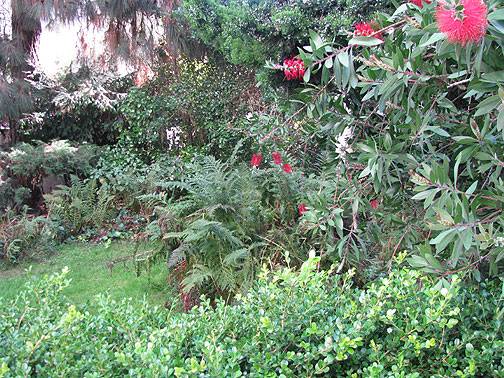 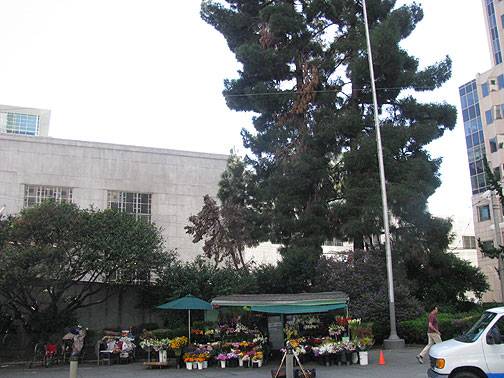 Beneath this 45-year-old pine lies a hidden patch of nature, nurtured for a half century by Stephen O'Brien. 2009. 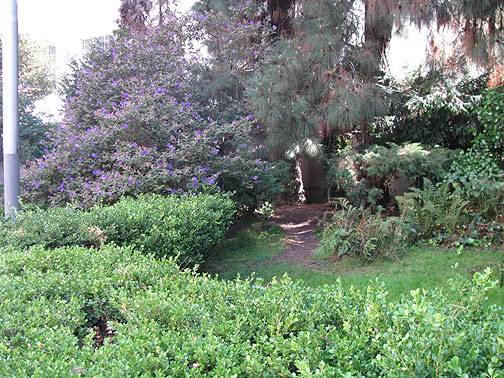 A garden flourishes in a forgotten corner in 2009.

Stephen O'Brien knows what's going to happen. His 52 years of nurturing these garden spots will be bulldozed with the rest of the old 1939 Terminal, making way for the new tallest building in San Francisco and a multi-billion dollar transit center. The project has been gestating for years. I once had an office at 37 Clementina, which is only about a block away, and I remember the original plan in the late 1980s to bring Caltrain into the city center at 1st and Mission in order to connect to BART and MUNI, establishing a true regional transit hub. The Caltrain extension was deep-sixed by transit planners. Years went by, during which BART was extended to the airport and MUNI extended its N-Judah by building waterfront tracks around to 4th and Townsend (massively subsidizing the Giants' "privately financed" stadium). Now they've resuscitated the Caltrain extension, in order to bring High-Speed Rail into the center of downtown. The profligate waste of resources is breathtaking. But as long as engineering firms and contractors and building trades workers are all keeping busy, it's good for the economy right?

Anyway, as we go through our daily lives it's easy to not see the little patches of nature struggling to gain a foothold in the aptly named concrete jungle. I spoke to O'Brien on Wednesday and learned a bit about his long service at this deeply layered historical site. He told me when he showed up in 1958 there were just brown patches where today there is dense foliage and tall trees. I went to look for old photos at the Main Library's online collection, and as you can see from these pictures, the spots that Stephen has been maintaining have always been "green," albeit nothing like what he's helped them become. 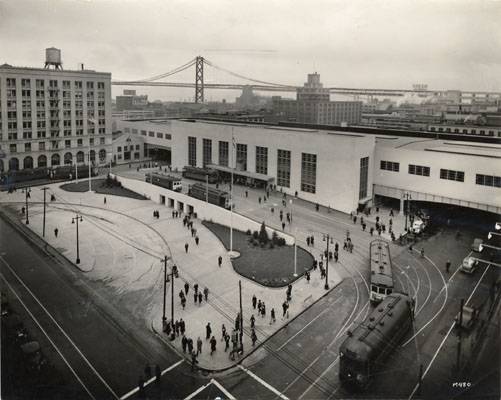 In this December 27, 1939 photo taken in the first year of the Transbay Terminal's operation, you can see the two garden spots laid out from the beginning. 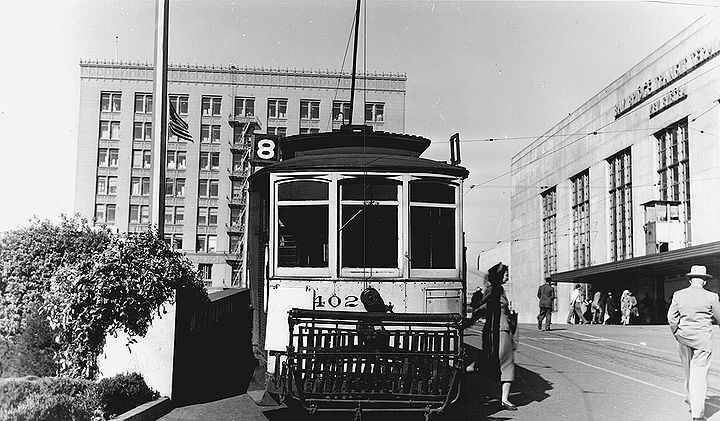 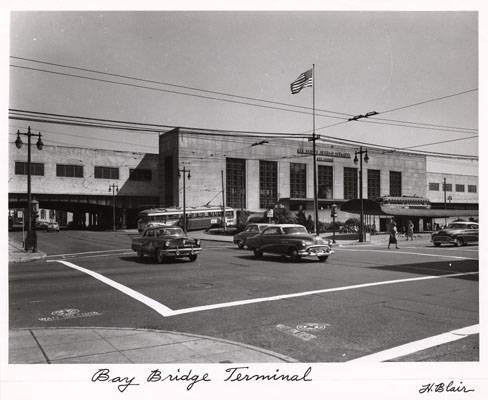 This photo of the southwest corner of Mission and Fremont looks like some time in the mid-1950s, but was undated. 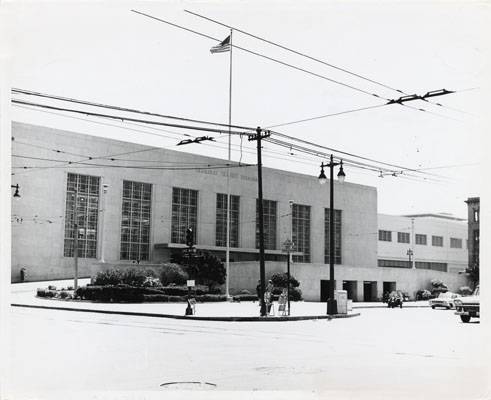 By August 10, 1964, Stephen O'Brien had been watering and attending this garden for almost six years. 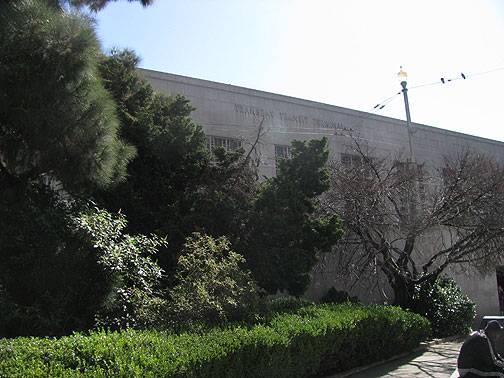 O'Brien has an interesting history himself. He's got an Irish name but on his mother's side of the family, he has an English grandfather and a German grandmother. His English grandfather once owned a dairy ranch on the western slopes of Mt. Tamalpais before selling it off for $500! O'Brien grew up in Tomales Bay, and as a young man he jumped at the chance to purchase a lot in the newly subdivided Inverness back in the 1940s: $25 down and $25 a month until he'd paid off the $1,000 price. Today his lot is the only one left in Inverness that hasn't had a house built on it.

He told me about the barber who used to have his business inside the Terminal. After helping him sink his plumbing O'Brien got free haircuts for a long time. There used to be three different restaurants inside too, including the James Gray Company restaurant, and shoeshine and shoe repair were also thriving businesses there. Continental Trailways bus service once used the station in competition with Greyhound, just as other train lines once ran across the Bay Bridge along with the Key System, until the Bay Bridge was converted to motorized vehicles only.

O'Brien was in the basement a few years ago and saw that the vast underground space was still as good as new. Nevertheless, it's all coming down soon. He noted that the rebuilding of the Fremont Street ramps from the Bay Bridge had probably saved his gardens for an extra seven or eight years. The gnarly pine tree closest to First Street was saved from a nearby State Building, when O'Brien transplanted it from a discarded planter. It's grown to be 20 feet tall and while it's oddly shaped there's no denying that is seems to be thriving with its roots in the ground! The twin pines at either end of the Terminal were planted more than 45 years ago and though they've grown rather tall, they're dwarfed by the skyscrapers that have continued the southward march from downtown. O'Brien told me about the various birds, LBB's, gulls, hawks, and pigeons that have made this mini-habitat a resting spot. Varieties of butterflies have found a home here too. 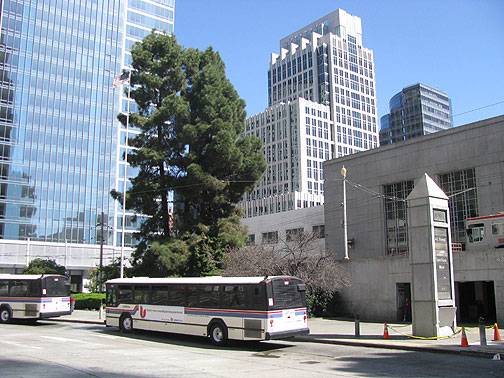 The eastern end of the Terminal plaza. 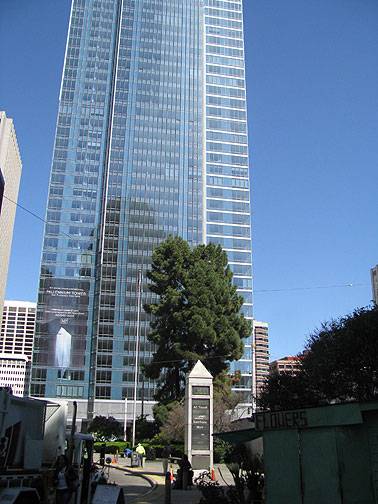 The Millennium tower dwarfing the 45-year-old pine tree at Fremont and Mission. 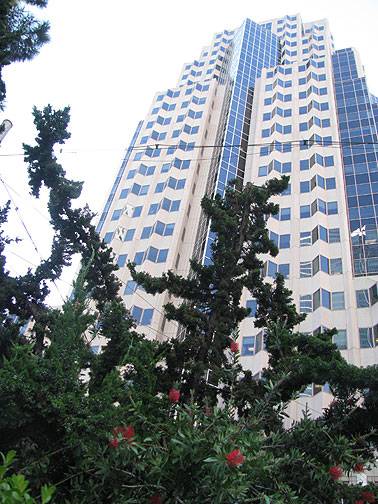 To the west, this ungainly monster dominates a hearty pine tree that was saved from a discarded planter by Stephen O'Brien. 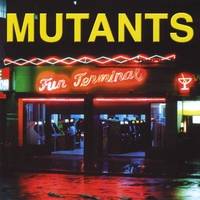 Who remembers that the highrise in the photo above was built on the site of the old arcade known as "Fun Terminal"? The same "Fun Terminal" that gave its name to the seminal album by local rockers The Mutants back in the early 1980s?...

Stephen was philosophical about losing his half-century's work. It makes him sad, of course. O'Brien's gardens have survived in surprised juxtaposition to the changing neighborhood that surround them. Easy to overlook, his gardens are larger examples of the persistence of nature even in a highly built environment. For those of us who haven't noticed the garden spots as we've scurried by, preoccupied with the day's work or the domestic dramas ahead, their imminent disappearance (they will no longer be maintained, but should stand for a few months more at least) might serve as a cautionary note. Shouldn't we stop and smell the flowers? And shouldn't we honor the essential work of the invisible toilers in our midst, people like Stephen O'Brien who has selflessly and without ulterior motive kept these little patches of urban greenery flourishing for decades? 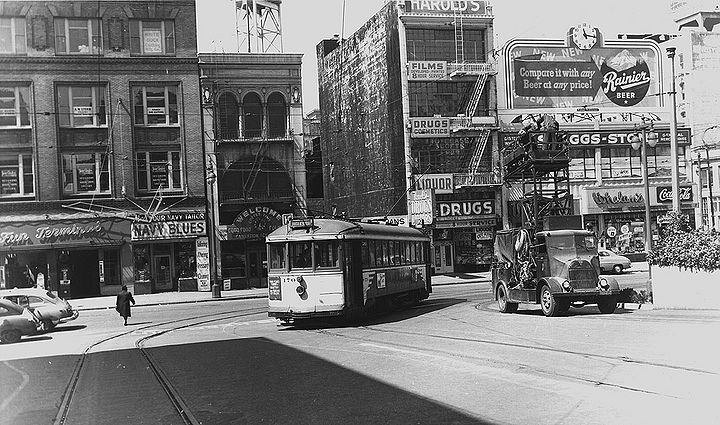 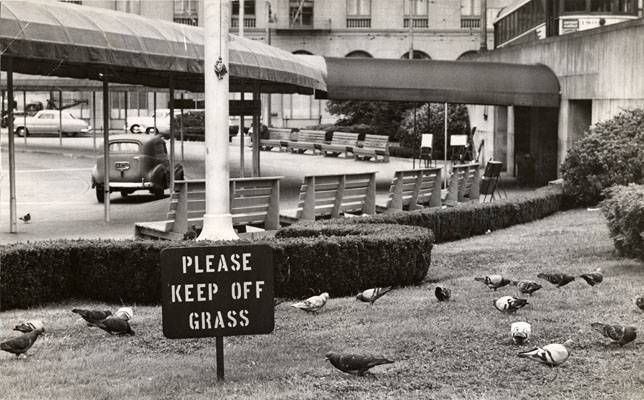 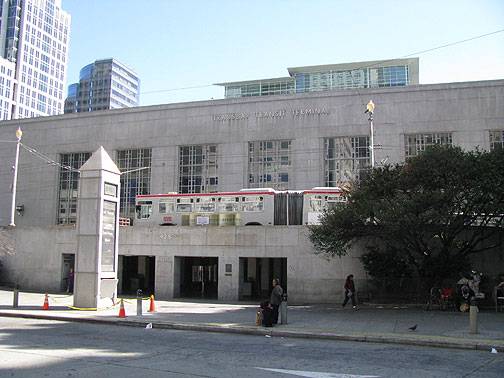 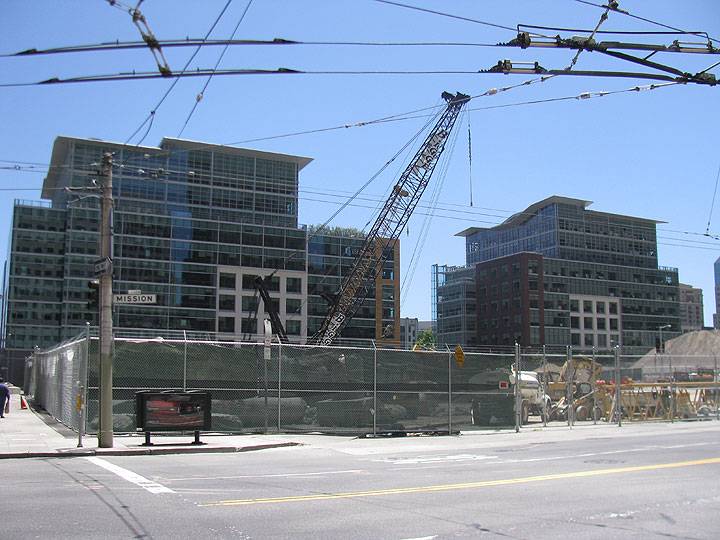