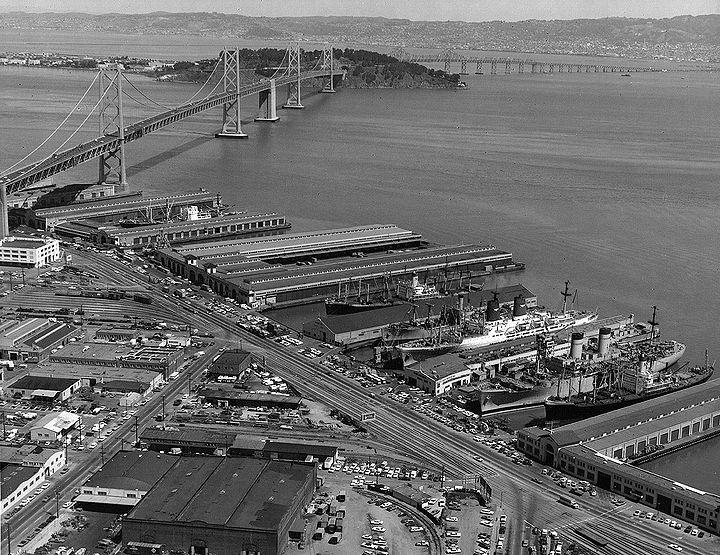 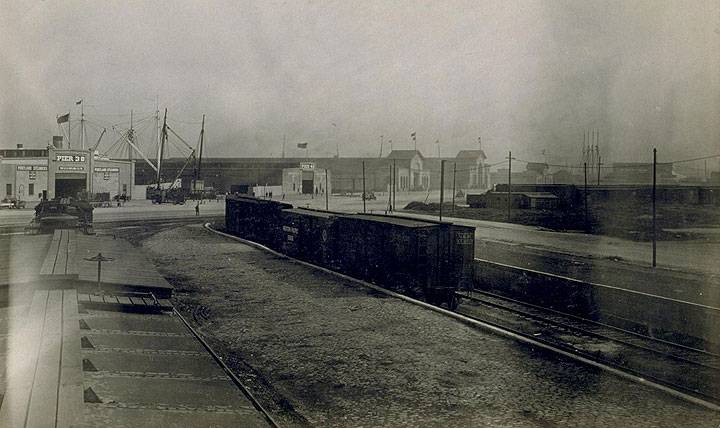 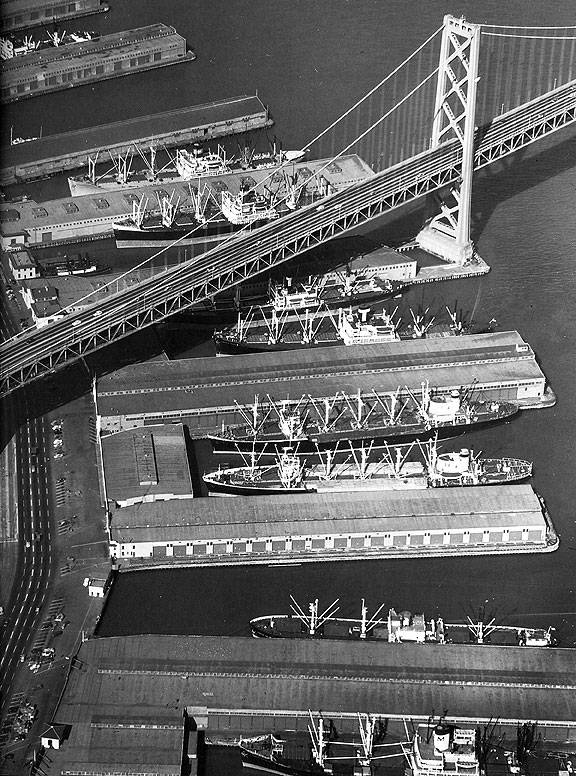 Waterfront piers under and south of Bay Bridge, 1948. 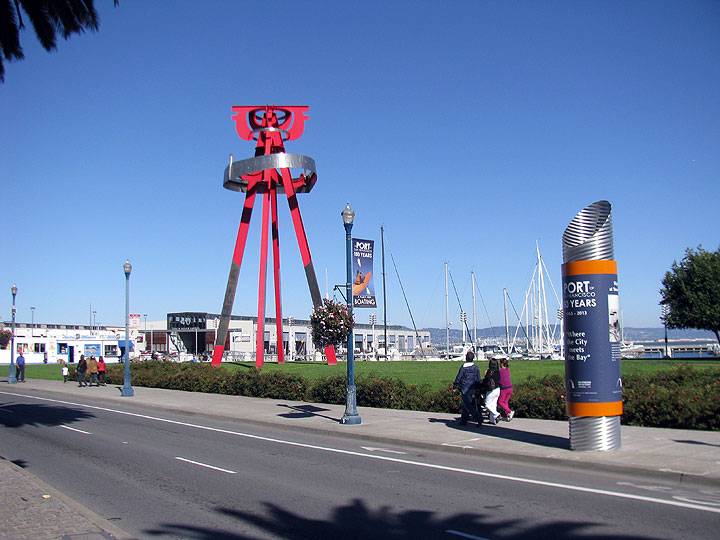 This red monument by Mark Suvero in the middle of "South Beach" commemorates the lost Maritime Industry of the waterfront.

Captain William Figari, whose oral history was taken in 1968 by the Regional Oral History Office of the Bancroft Library, University of California, Berkeley, explained the use of the piers south of the Ferry Building. Captain Figari worked for Crowley Launch & Tugboat Company between 1899 and 1965, with only an interruption of two years. He described the San Francisco waterfront:

"You know years ago piers didn't have numbers on them. At the south end of the Ferry Building would be Mission One. Emergency Hospital was there, and then the steam schooners that used to carry lumber down from the coast used to go in there and load supplies, you know, for the. different logging camps and things like that, like Crescent City and Gualala and Brookings and all those outside ports there where they used to load lumber. You take like going to Eureka, they used to have passenger steamers run to Eureka. You couldn't go to Eureka unless you went up by steamer. The Pacific Mail Steamship Company had two steamers running there, the Pomona and the Corona.”

“Then came Howard One, Howard Two and Howard Three. And then came Folsom Street.” Captain Figari was asked what those piers were used for. "Howard One—the sailing ships used to go in there… Howard Two was a sort of a freight—they used to have some freight—like a sugar boat used to go in there and unload sugar and things like that, and the steam schooners used to come down from Coos Bay—the steamer Czarina and the steamer Breakwater used to come down from Coos Bay and discharge coal there.

"Then Howard Three was an open dock. Steam schooners used to come in. "Then came Folsom Street, which was a transport dock. During the Spanish-American War the Army used to unload soldiers there. Then came Harrison Street Wharf. That was coal bunkers also on one side, and on the north side Smith-Rice used to have a derrick there. They used to repair ships, and they used to take and heave the ships over and the caulkers used to get on the side of the ship and calk. But they used to take the ship out and then turn around and do the other side, see. And they'd cau1k as much as they could. Then they'd have to put them in dry dock to get the bottom. 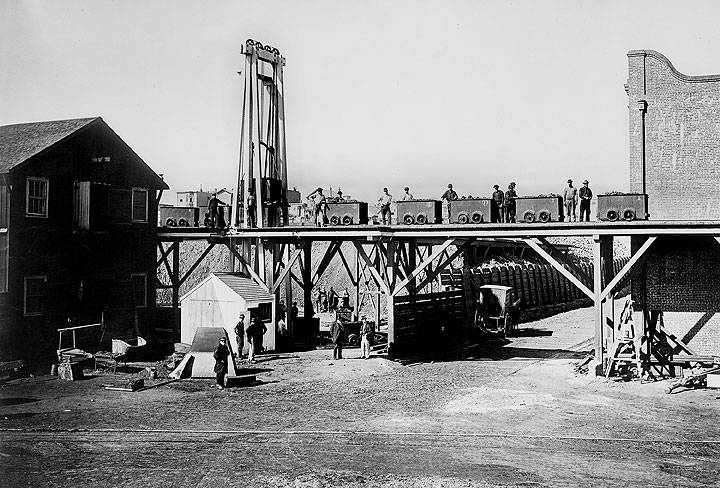 1871--Coal yard and tramway of the Pacific Mail Steamship Company wharf, which was close to today's Pier 38, off the end of Brannan and the Embarcadero.

“Then the piers used to run out like that, 1ike they do now. Then they used to go south. Harrison was the last pier that ran out that way [the way they do now]. Then they used to go south, which was Spear Street, and the steamers that used to run to Portland. ...Then came Main Street. They had two dry docks in there, you see. They used the dry docks for steam schooners and things like that. Then came Beale Street, which was another coal bunker. And then came the Pacific Mail dock; steamers running down to Panama and to the Orient. The City of Peking and the China and all those vessels. That was at the foot of Brannan Street. And then from there on there was an oil company on the other side named Artic Oil Company. Then way down further was the Union Iron Works. Then came the Western Sugar Company, where the vessels, the sailing vessels, used to come from Honolulu. It used to be sack sugar that they used to unload there, the sugar refineries.”(13)

A Japanese steamship line, Toyo Risen Kaishs, known as TKK, was docking regularly in San Francisco at Pier 34 by 1915. By 1924 the TKK 1ine had merged with the Nippon Yusen Kaisha Steamship Company, known as NYK, and docked at Piers 34 and 36. Captain Dexter Flint came to San Francisco in 1923 as a seaman. He studied and took the examinations to increase his rating to third, second, first mate, and then captain. He was a Bar Pilot, a position of great respect among seafarers, when he retired. He told us a great deal about the San Francisco waterfront as it was when he first came here.

Captain Flint said, "The waterfront was not called the Embarcadero when I first came here in the 1920's. It was known as East Street. And the paving was all cobblestone, and a large part of the drayage up and down the waterfront was done by 'hay burners' [horses]. The stevedoring was entirely different that it is today with containers. Most of the cargo was brought alongside the ship in two-wheeled trucks and slung up in rope-slings aboard the ship, and of course was all stowed by hand.

Discharging was mainly done with rope-slings, landed on the dock, put on two-wheeled trucks and pushed over to a pile on the dock where it was stacked up.

“Most of the stevedores were either natives or Scandinavians that had come in here as sailors and jumped ship or—maybe decided to stay, and some of them had sailed on the Coast here and then had been longshoring. At that time there were a great many ships in the Coastwise trade. There were hundreds of steam schooners running up and down the Coast, and the crews on the steam schooners were largely Scandinavian, Finns, with a few other nationalities, some German. We did have quite often aboard ship Chinese and occasionally Japanese cooks. But they did not enter into the stevedoring operation at all. There were also a great many Irish along the waterfront in stevedoring work.

The Pacific Steam had Pier 16, 18, 20, and occasionally 22, which was also the Panama Pacific pier, and those were busy piers. They were just south of the Ferry Building. The first pier, of a commercial nature, south of the Ferry Building was Pier 14. But they did not take vessels of any size in there. There were some small craft; also it was the express company's pier. There was a lot of business out of it, but not too much with ships. 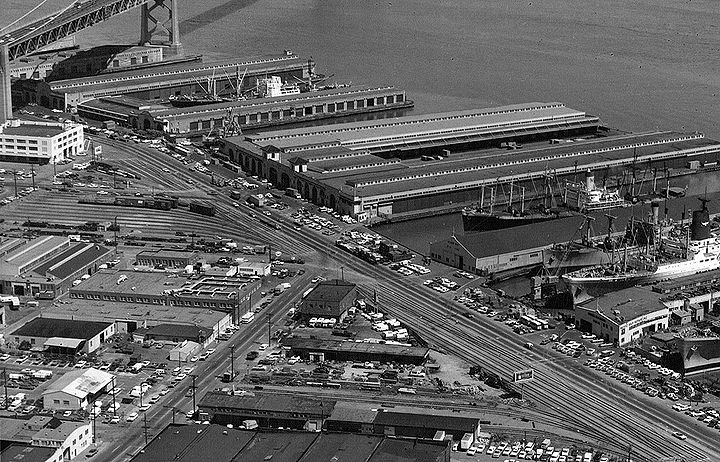 A close up of the above photo shows more detail of South Beach piers and railyards off Embarcadero, c. 1972.

"Most of the time there was a ship in every one of those piers, and sometimes there were ships on both sides, both north and south. The north side of those piers, at least of 16 and 18, had depressed railroad tracks along that side of the pier where the floor of a boxcar was right on a level with the pier. They would have to put a metal plate between the open door and the pier to make it easy to run in and out of the boxcar with the two-wheel trucks. The south side of the two piers was a flush apron, and also overhead was a walkway with an apron that was adjustable. It could be raised and lowered, where the gangplanks were rigged to go on the passenger ships. The passenger ships tied up at exactly the same spot. The gangplanks were hauled aboard, and the passengers went in and out that way. The overhead walk cleared all the cargo operation, and the overhead walk finally came down at a slant and landed right out at the edge of the street. So the passengers didn't have to fight their way through a stevedoring operation to get on and off the ship." 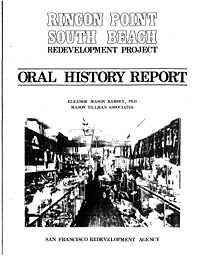