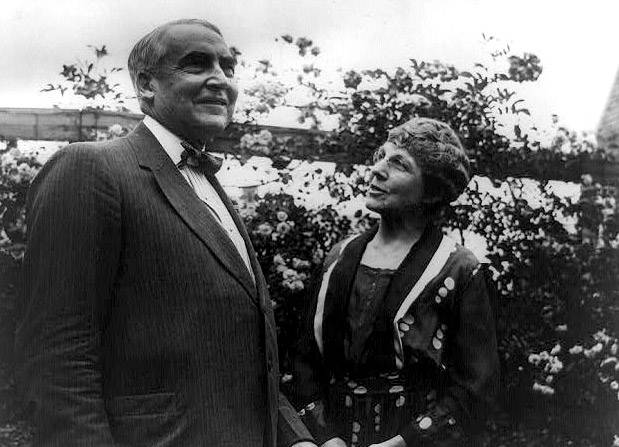 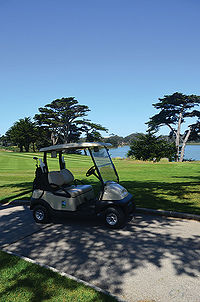 There’s a special reason that this golf course, located on the west end of the city, is named Harding Park. Designed in 1925 by golf club designer Willie Watson, the facility honors the then recently deceased president of the United States, Warren G. Harding, who had breathed his last in San Francisco at the Palace Hotel two years before.; Photo: Art Peterson
In late July 1923, Harding and his imperious wife Florence, appropriately nicknamed “The Duchess,” returning from a trip to Alaska, checked into the Presidential Suite of the Palace. Harding was not feeling well. At 58, he was hearty, handsome, gentle, and not very bright. His wife was the brains in the family. 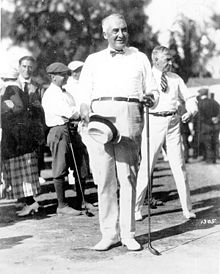 President Harding golfing in Florida, Jan. 29, 1921; Photo: Florida Memory
It was thought the president only had some kind of bug, but the city was concerned. News vendors outside the hotel hawked the updates of his condition. Mayor “Sunny Jim” Rolph ordered the streetcars on Market Street to stop clanging their bells when they passed the hotel. But, a few days later, on August 2, the president was dead.

Although Harding’s death was officially ruled a heart attack, no one knows for sure how he died. That’s because his wife would not allow an autopsy on his body. He may have fallen victim to complications from food poisoning he had endured in Alaska, although no one else in his party who had ingested the same meals had fallen ill. He may, indeed, have died of a heart attack, perhaps brought on by high blood pressure exacerbated by worry over well-founded rumors of corruption in his administration.

Or, as some still think, his wife may have done him in. Harding had been a sexual player when the press did not go out of its way to catalogue such indiscretions. He was a man with more than one mistress and at least one out-of-wedlock child to his credit. The strong willed “Duchess” did not take kindly to these shenanigans.

On the early evening of his death, the president seemed to be feeling better. Mrs. Harding had been reading to him. She left the room suddenly and minutes later the president was dead, leaving behind a grist of implications for conspiracy theorists. Within a year, Florence Harding herself had died.

Excerpted with permission from Art Peterson's book, "Why Is That Bridge Orange?" published in 2013, by Inquiring Minds Productions.
Retrieved from "http://foundsf.org/index.php?title=President_Warren_Harding_Dies_at_Palace_Hotel&oldid=21461"
Share this page: