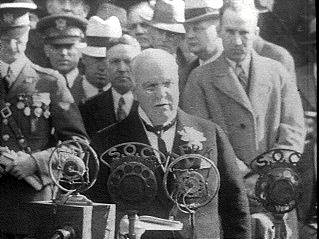 Sunny Jim Rolph at his inaugural as Governor of California in 1931.

Gregarious, outgoing, always smiling, "Sunny Jim" Rolph's administration, during which gambling and prostitution thrived in San Francisco, was characterized by the not so unlikely combination of populism and debauchery.

The greater part of his term of office was spent cajoling the public with handshakes and smiles. He was seen as a dapper, man-about-town with a friendly word for everyone. On his way to work at City Hall he was famous for picking up pedestrians along the street and driving them to whatever their destination. His limousine served as ambulance for more than one street accident.

Rolph entered politics at the age of 42, already a wealthy member of a shipping and insurance company. He lived "way out in the Mission," in a home considered a San Francisco showcase. In 1911 "Sunny Jim" was urged to run for Mayor against the incumbent labor candidate P.H. McCarthy, whom the city's ruling class considered incompetent. McCarthy had been accused of allowing the corruption of the city (notably the Barbary Coast) to run rampant. The 6-week campaign included fist fights, egg-throwing, police riots --- all typical of pre-TV-era electioneering.

Rolph won easily over McCarthy, and immediately set to work preparing for the Panama-Pacific International Exposition. With regard to cleaning up the Barbary Coast, Rolph instituted a few token efforts, mainly to appease the outspoken church groups, but never launched anything resembling an all-out crusade. The city was generally characterized as a "wide open town."

The 1915 Exposition was not held in Golden Gate Park as had been expected, but at Harbor View, reclaimed marsh land along the north edge of the city, now the Marina District. Golden Gate Park Superintendent John McLaren refused to allow the park land to be usurped by greedy politicians and commercial entrepreneurs for their own gain.

Rolph in his stove pipe hat led 150,000 marchers down Van Ness Avenue, then Lombard Street to the Fairgrounds. The profits from the Exposition were used to build Civic Auditorium. Rolph was easily reelected. The only serious rival was Eugene Schmitz, the former mayor driven out of office by financial scandal in 1907.

In the years before the U.S. involvement in World War I, Rolph became even wealthier by supplying coal and ships to the Allied Countries. His net worth was estimated at $5 million. He bought a ranch west of Stanford University. Reportedly the Department of Public Works made all the improvements on the ranch at the taxpayers' expense.

But "Sunny Jim" knew how to throw a party. After the U.S. entry into World War I, Rolph bought a shipyard north of San Francisco in Humboldt County. To celebrate the "largest 4-masted wooden ship ever built on the West Coast," he threw a party the likes of which had never been seen in San Francisco. The festivities cost $25,000. Rolph's salary as Mayor at this time was $6,000. The celebration lasted 2 days and 2 nights on a chartered 12-car Northwest Pacific train.

With everything going his way, Jim Rolph attempted to run for Governor of California. He filed in both the Republican and Democratic primaries. Winning the Democratic nomination, and nearly the Republican as well, Rolph seemed a shoe-in for the office. But there began his trouble. A state law maintained that any candidate losing his own party's primary (Rolph was in fact a Republican) was ineligible to run on the other ticket. Rolph was out of the race. Furthermore, he incurred the wrath of the Democratic Party, then led by Woodrow Wilson, for his spurious intrusion into the primary -- embarrassing and essentially sabotaging the party. Furthermore, Rolph's contract to build three new ships for the Federal Government was cancelled by the Federal Shipping Board, and he was subsequently enjoined from selling any ships to foreign governments. Rolph was facing financial ruin.

Despite his staggering losses, Rolph organized a celebration for the returning soldiers at the conclusion of the war. The event was as much a riot as a parade, with Rolph drawing much attention to himself.

He was easily re-elected Mayor several more times. To say that "Sunny Jim" enforced the Prohibition laws as little as possible, would be putting it mildly. The Democratic National Convention came to San Francisco in 1920, only five months after the introduction of the bill. H.L. Mencken recalled Rolph's handling of the convention as "the most charming in American annals."

Rolph's stand on Prohibition helped get him re-elected continuously throughout the 1920s. His personal finances remained in shambles, Rolph having mortgaged everything he owned. But the city prospered along with the rest of the country. Whorehouses and gambling dens, though also flourishing, were kept under strict police supervision, and the streets remained safe.

Rolph also knew how to "play the press." Reporters eagerly gathered in Rolph's office on days when serious news was short, and Rolph would always oblige them with a juicy story -- whether or not it had any basis in reality.

It was during his administration that the Hetch Hetchy water and power system was built. In order to produce more cheap power for the city, one of the most beautiful valleys in Yosemite National Park was deliberately flooded and the O'Shaughnessy Dam built, despite the tireless protest of John Muir and his Sierra Club. As with all major building projects under his tenure as mayor, Rolph was on hand for the "photo opportunity."

Everyone in San Francisco seemed to know "Sunny Jim" Rolph. He belonged to nearly every organization in the city, and happily attended any function to which he was invited. The greater part of his day was spent in self-promotion. His election campaign was not limited to election time, but ran continuously.

While Rolph was the charismatic figurehead of city government, there were two men in his administration who actually ran the city on a day-to-day basis. With an iron hand, Sheriff Tom Finn and the bailbonds-brothers Pete and Tom McDonough directed what the public saw and heard. Rolph left the police department entirely in the hands of the McDonoughs. The only other significant political influence came from Examiner editor Bill Wren who used his considerable influence whenever he deemed it necessary. City Engineer M.M. O'Shaughnessy, famous as an autocratic and impossible man, was protected by Rolph and carried out most of the major public works projects that still shape San Francisco today, including the building of westside streetcar lines and the Hetch Hetchy system. John McLaren's tenure at the head of the Park and Rec Department was also covered by Rolph.

Jim Rolph's final term in office was less than stellar. His drinking had gotten out of hand, and there were constant rumors about his affair with movie star Anita Page. Frequently at public events he appeared intoxicated and red-faced. He missed meetings at City Hall and drivers would be sent out to find him. His bouts included trips to San Jose were he would spend days drinking alone. At the Grand March of one Policemen's Ball he brought along San Francisco's most notorious Madam as his escort.

Sunny Jim tried once more to run for governor in 1930. His campaign took him to all 58 California counties. Elected easily, his began his term on January 7, 1931 as the effects of the Great Depression set in. Rolph was woefully inadequate for the job and a recall movement was launched against him in 1933. He died in 1934, brought home to lie in state in the City Hall rotunda.