Water Wars, Past and Future! 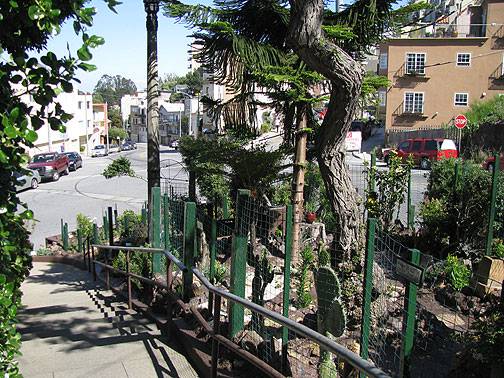 Neighbors have created this triangular oasis at Clayton and Corbett in Upper Eureka Valley.

One essential way to enjoy the streets of San Francisco is to get out and walk around. We have so many amazing walks at our doorsteps. In the hills are hidden staircases, promontories and open hilltops with amazing views, and secret treasures. I’m particularly curious to dig through the layers of history wherever possible. For the last seven years I’ve been hiking up Liberty Hill, across Kite Hill and then up and over Market to the intersection of Clayton and Corbett Streets, just below the spot where the Pemberton Steps come down. If you’ve only passed this way by car, you’re missing the whole show!

The intersection is quite a huge expanse of asphalt, but in plain view are some hints of what once was, and a fantastic garden that neighbors have brought to life at the point where the streets meet. To the west of the intersection is an open lot with outcroppings of chert, the ancient seabed thrust upward that makes up a good number of our hills. Somewhere beneath that hillside is a bubbling spring of fresh water, surging to the surface year round. That water is sometimes visible to passersby even now, as in this photo (below the break) showing water running out on to Clayton from the hillside. 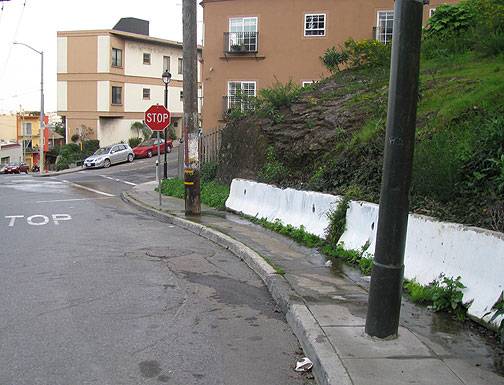 You could often see water seeping from the hillside at Clayton and Corbett, evidence of the historic spring here, prior to the building of condominiums on the lot at right in the early 2010s.

Just to its north are the Pemberton Steps, a lovely staircase that takes one up the hill to Graystone Terrace, a nice way to access Tank Hill from the south, across Clarendon Road (the other way to get to Tank Hill, with its spectacular views of the city, the Golden Gate and on clear days, Bolinas and Pt. Reyes, is by going to the very top of Shrader Street and turning left, walking to the end of the cul-de-sac and following the path out of the end past the wildflowers to the summit). The uppermost flight of the Pemberton Steps are still beautiful old stone, but the lower two flights were redone in the past few years, with pink cement and a water fountain. As is the case with most stairways in upper Eureka Valley, there are some amazing homes along the steps with gorgeous gardens and fantastic viewpoints. 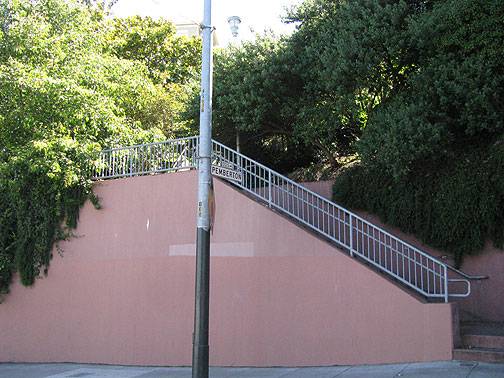 This pink wall doesn’t necessarily look very inviting, but walk up and discover the amazing stairway and find your way to Tank Hill! 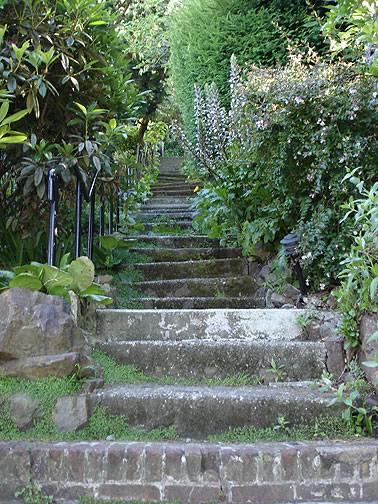 The upper flight of Pemberton Steps still has an ancient feeling… 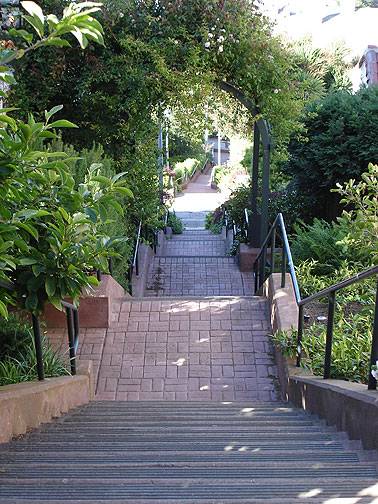 The lower flights of Pemberton are good examples of how to do it right, when stairways are redesigned…

The landscaping along the Pemberton Steps is lovely, harmonizing well with the triangular garden at the intersection below. 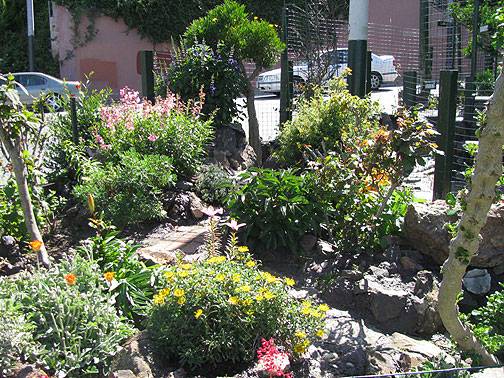 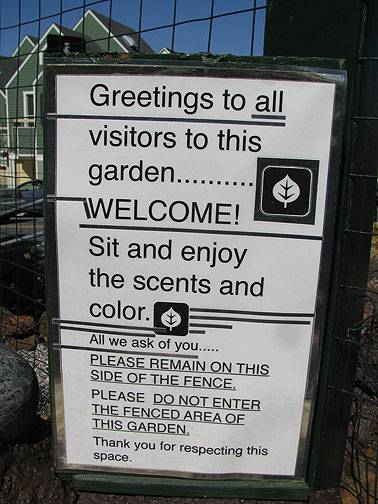 The intricately landscaped garden has some standing and sitting areas to enjoy it from, but is otherwise behind small fences.

The mysterious spring-fed water, though, is where our story lies. Two landmark buildings near this intersection housed historic characters who once fought over the water. Our characters are Behrend Joost, whose pink farmhouse is one of the older structures in the area, sitting atop the rainbow-ish mural along upper Market as it turns southward on its ascent, before the intersection with Clayton (a hidden garden connects the pink house’s garden with Corbett above it, open to the public from the Corbett end). 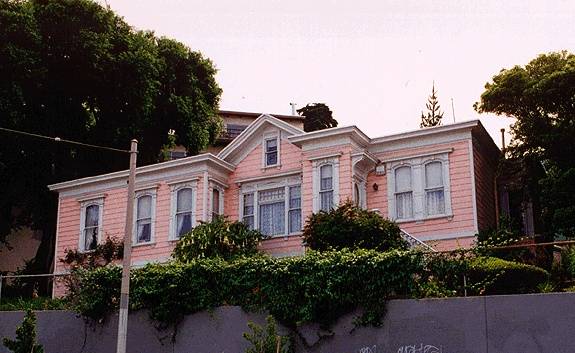 Joost was an important player in San Francisco’s early transportation and real estate development (two things that always go hand in hand). Our other character was a San Francisco eccentric named Alfred "Nobby" Clarke, who built the amazing turreted mansion at Douglass and Caselli, just a few blocks downhill from Clayton and Corbett. If you’re visiting this on bicycle or foot, you will notice quickly that the low point in upper Eureka Valley is 18th Street, descending almost directly from below Clayton and Corbett, and just downhill from the mansion on Caselli, known in its time as "Nobby Clarke’s Folly." Clarke got his fortune by becoming the City Clerk during the 1880s, a time when anyone needing city permission for anything needed his signature, a lucrative monopoly whose proceeds he apparently channeled into the construction of the 20+ room mansion.

Joost owned the Mountain Spring Water Company that had its water origins southeast of his home. Residents in the neighborhood today recall a surface spring at Corbett and Clayton from which water was sold by the bucket or cup. A wooden bridge across Corbett on Clayton made the road muddied by the spring much more passable. 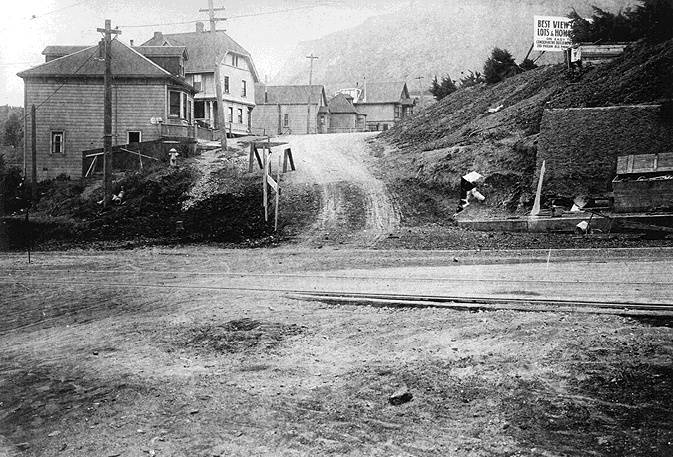 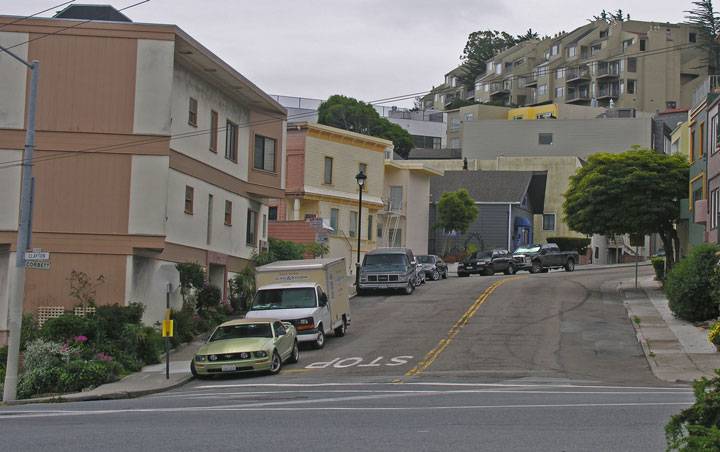 That Mountain Spring water turned "Nobby" Clarke’s and Behrend Joost’s lives into daily warfare. In the early 1890s, Alfred Clarke bought seventeen acres of land in and around Caselli and Douglass Streets. Clarke’s land was downhill from Joost’s. The spring in dispute flowed through Joost’s property down to Clarke’s. Clarke didn’t like Joost’s water service and started his own. In turn, when Joost extended his water service, he ruined business for both of them.

"Nobby" was clearly contentious and maybe a bit proud. After he built, or overbuilt, his mansion in the Gilded Age, he and his upslope neighbor, Behrend Joost, began a feud that lasted their lifetime. While the frequently given reason for the daily warfare was the Mountain Spring Water Company service Joost owned and provided to Clarke and others in Eureka Valley, it is probable these two "rags to riches" businessmen were destined to compete about anything and everything. Their stormy relationship didn’t stop with sharp words; neighbors still recount stories of their fist fights on 18th Street.

The water still runs down beneath 18th Street. In 2002 during winter rains a major sinkhole opened at 18th and Dolores, as underground waters had washed away a good deal of the soil holding the asphalt. The storefront now housing a boutique on the northeast corner of 18th and Dolores (next to Bi-Rite Creamery) has regular basement flooding during heavy rains. Just a bit further east, the Women’s Building also has a running creek in their basement, and not so long ago, the corner of 17th and Valencia that now houses a police station, had a PepsiCo bottling company that made Pepsi from the waters below. In fact, before full urbanization in the Mission, a major tidal inlet existed, whose outlines you can see on old maps, which is precisely why the Franciscans originally established the Mission where they did, close to fresh water, fish, fowl, and game. In the 1906 quake a 4-story hotel fell three stories into the landfilled wetland… During the 1989 quake a lot of buildings along the old creek bed were damaged too.

So as you walk around enjoying the hills and views, look for the layers of history, some recent, some so old that they’re in a state of perpetual conflict with the urban landscape that has usurped their space (at least temporarily)!