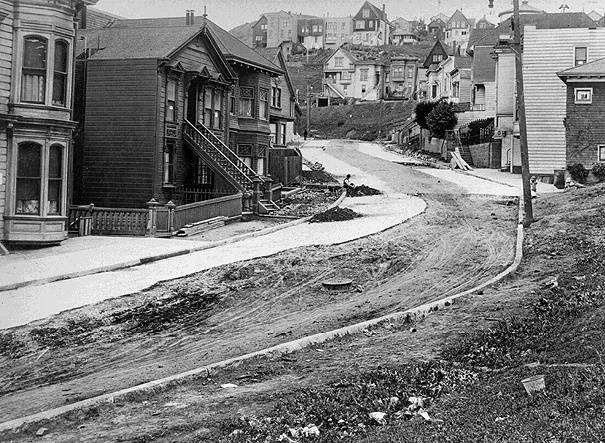 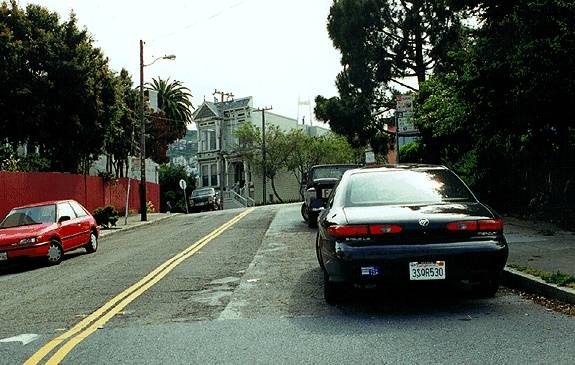 Like people and buildings, streets go through many changes. Tracing the life of Old Corbett Road that climbs the eastern slopes of Twin Peaks in San Francisco, one slices through many layers of time that gives yet another picture of San Francisco and a fresh appreciation of neighbor-hood history.

A narrow, winding, hilly street, today's Corbett Avenue resembles the old trail it probably once was. It is one of the oldest thoroughfares in San Francisco's 'outside lands,' a word referring to the southwest part of town. Corbett Street first showed up in the 1854 City Directory running from Dolores Street to the Mission Creek. (p. 162.) A subsequent map of 1861 (Published by Largely and drawn by V. Wachenreuder) showed Corbett Street starting from Castro and Market, ending at Harrison Street. During the days of the Mexican Rancho San Miguel owned by Jose Noe (1846-1851), it was likely widened from an earlier trail used by Spanish Colonials and perhaps even by the Ohlones and Miwoks.

To verify the person after whom Corbett Avenue was named is tricky. Neighborhood folklore claimed Gentleman Jim Corbett, the famous prizefighter, as the honoree. But Corbett Avenue was already on the map when Jim Corbett was born in 1866. Loewenstein and Block in their San Francisco street books referred to John Corbett who was Thomas Hayes clerk. Yet another likely candidate was W. Corbett who lived in the right neighborhood during the right time. William Corbett was an assistant alderman (supervisor) under Mayor John W. Geary, from 1850-1851. Corbett's address was: Mission Dolores. (Bancroft, Calif. History, Vol., VI, p. 217: Municipal Reports, City Directory 1850).

In these early days of American San Francisco, street naming was done by the owner of the land the street traversed. Customarily, names of esteemed colleagues, friends and family were given to streets. Whichever Corbett, William or John, is the right namesake meant Corbett Avenue was named after someone with a good reputation.

1) When in 1854 it began as a short route in American San Francisco, Corbett was called Corbett Street. Its limited run between Castro and Harrison was short lived. By 1865 Corbett was renamed 17th Street. (Municipal Reports).

2) F.L.A. Pioche and L.L. Robinson constructed the second Corbett Road as part of a subdivision they offered for sale in 1867. (Map Book 2A and B, p. 35). Corbett began at 17th and Douglass Streets, intersected Caselli (now Clayton) until it met Falcon (now Market) and Ocean (now Grandview).

3) The third Corbett Road covered the route of today's Portola Drive and Junipero Serra to Ocean Avenue, called in 1872 the Mission and Ocean Beach Macadamized Road and owned by William Fitch, an attorney. (Map Book C, p. 37: 1872). Fitch turned the road into a toll road, putting a toll gate in the vicinity of the junction of Market, Grandview and Corbett. At the turn of the century, during the time Adolph Sutro owned the Rancho land, the Mission and Ocean Beach Road name was changed to Corbett Road. After the Residential Development Company took over Sutro's Rancho San Miguel, RDC deeded this part of Corbett Road to the city. (Map Book G, p. 102-3: 1912).

4) The city then made further changes: 1914, City Ordinance 2623 formed Portola Drive; 1917, City Ordinance 4827 created the Junipero Serra segment to Ocean Avenue. Since that time, the route of Corbett Avenue remained the same as constructed by Pioche and Robinson in the mid- 1860s.

Corbett Avenue had a "racy past as a toll road leading to the Ingleside Race Track and the Ocean House Race Track, both on Ocean Avenue. The toll gate was on the ocean side of Corbett at the junction of Falcon Street (now Market Street) and Ocean (Grandview). 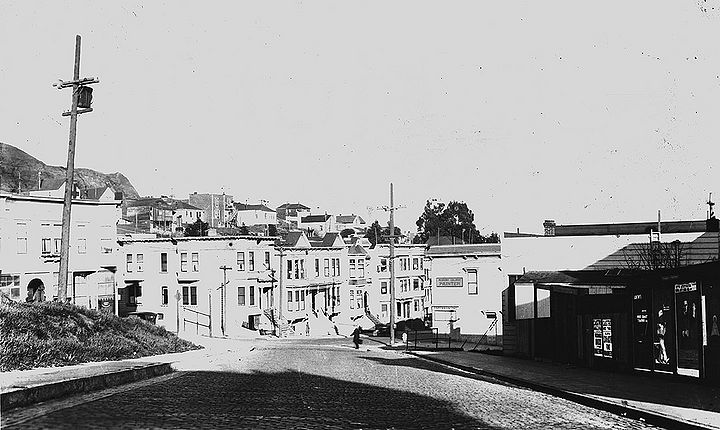 Corbett Avenue north at 17th and Douglass, Corona Heights in back at left, 1927.

Francois L.A. Pioche and Lester L. Robinson constructed Corbett Road as part of their first subdivision for sale in 1867. Pioche was usually the financier in their partnership and no doubt, L.L. Robinson, who built Californias first railroad, laid out the streets and lots. Pioche and Robinson did something out of the ordinary in conceiving this subdivision. Robinson drew the streets and lots curvilinear. Instead of reckoning with the hilly terrain by invasion, the developers used accommodation. They left the streets to wind and did not right angle them into grid patterns as was true downtown. Lots were pie-shaped or irregular coinciding with the natural curvatures of the land. Corbett Road was also allowed to wander like the typical farm road it was. What Pioche and Robinson did was very unusual in their day.

In 1872, in poor health from a carriage accident, Pioche ended his life. Adolph Sutro, an avid collector, bought every piece of Rancho San Miguel he could from the French Bank with which Pioche had been involved. (Argonaut, Mar. 7,1898). That transaction included Corbett Road. Property around Corbett, and Corbett Road itself remained unchanged until the trust in Sutro's will was declared invalid in 1909. A trust had kept that land free from development. The Presidential Development Company became the new owners of Sutro's Rancho San Miguel. Since RDC planned to sell off parcels for housing development, that part of Corbett Road now called Junipero Serra was widened and straightened. In 1912, RDC deeded Corbett Road to the city.

At the end of the 19th century, another developer emerged in this part of town. Behrend Joost and his brothers were in the grocery business, then hardware, then real estate. Behrend built the city's first electric railway in 1892. He also owned the Mountain Spring Water Company that provided water to Eureka Valley customers. Neighbors recalled a sweet surface spring at the corner of Corbett and Clayton where water was sold by the bucket or cup. Long time residents remembered a wooden bridge on Clayton crossing Corbett, making the muddy spring area negotiable. Joost lived only a block away from Corbett, in the pink Victorian farmhouse, now called the Miller-Joost House at 3224 Market Street, currently owned and occupied by Dr. Polly Mosby.

At the turn of the century, some prominent San Franciscans met to promote an aesthetic vision of the city. They formed The Association for the Improvement and Adornment of San Francisco and elected James Phelan their president. When they approached the eminent architect Daniel Burnham with the task of drawing a plan of this "Utopian" San Francisco, he accepted and began work in 1904.

When Burnham cast his eye over the city, looking for a spyglass spot, he chose Twin Peaks. Willis Polk designed Bumham's bungalow on a spur of the Peaks. From there, Burnham no doubt saw what Jose Noe had seen before--the magnificence and majesty of the natural beauty of Rancho San Miguel--and the rest of the city.

During the years of ownership by Pioche, Robinson, and Sutro, Corbett Road was the route for many farmers to haul their dairy products and produce to the market. Surely, the wagons from a number of brickyards in the vicinity also used Old Corbett. Neighbors recalled Corbett as a road to transport lumber cut from Sutro's forest. As the farms and yards disappeared, more houses appeared. The greatest housing boom on Corbett occurred after WWII. As San Francisco's population exploded, housing mushroomed on Corbett, perhaps too quickly. The pattern of houses on the street has become a patchwork of architectural varieties oblivious to historical distinction and conformity.

As Corbett Avenue meanders up Twin Peaks, almost at every turn, as it must have always been, there are snapshot views of the Bay, or the hilly houses, or a sky that seems a million miles wide. Sometimes the horizon is crowded with clouds like enormous balloons. Corbett Avenue is an old farm road. It remains eccentric and modest as it wanders up the Peaks. Today, as in the past, it is more friendly to a rider on a horse or wagon or to a pedestrian than to a car or bus. Corbett is quaint, country like and very San Franciscan.

Old Corbett remembers the many travellers who walked its course-Spanish soldiers, Mission fathers, vaqueros, Ohlones, rancheros, school children, farmers, sailors, goldminers, dancers, housekeepers, explorers, earthquake survivors, a wedding party--a long colorful parade of people, some here for a visit, a leave, a lifetime--with their own baggage, their own stories, all of them leaving their footprints on the sunny path of Old Corbett Road.

I concentrated on Municipal Reports and California Supreme Court Case Reports, newspapers Alta California, S.F. Examiner, Chronicle, Bulletin, SF City Directories maps in the Recorder's Office; private collections and neighbors recollections. I am responsible for any errors, omissions or shortcomings in this piece. I value the corrections of my colleagues and neighbors as collectively we put our neighborhood history where it belongs-out front!

In these tight budget days, when most have little time for questioners, I particularly appreciated help from: the office staff of the Board of Supervisors, City Hall, Law Library, Recorder's Office, Sutro Library. The incomparable staff of the History Room, San Francisco Main Library, especially Stan Carroll and two of the Branch libraries: Glen Park, West Portal. I am most grateful to Mrs. Elfreda Menzel for her Sutro material and neighbor, Dr. Polly Mosby for her Joost information. Special thanks to my other neighbors who remembered earlier times with me. Barbara Griffith and MeMe Riordan gave me their valuable editorial assistance.