This article originally appeared on Mission Local, first in 2009, and in this version in 2014. 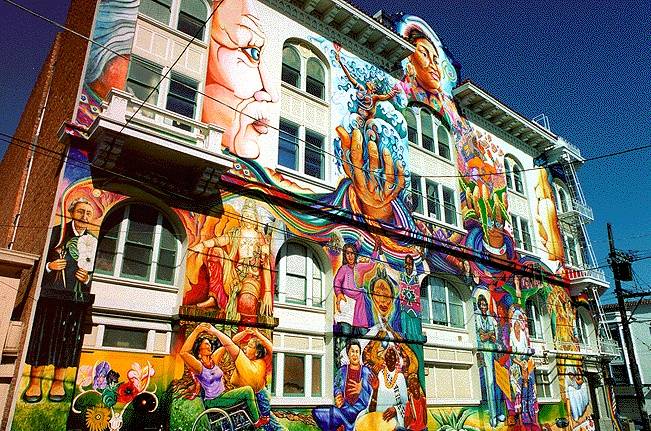 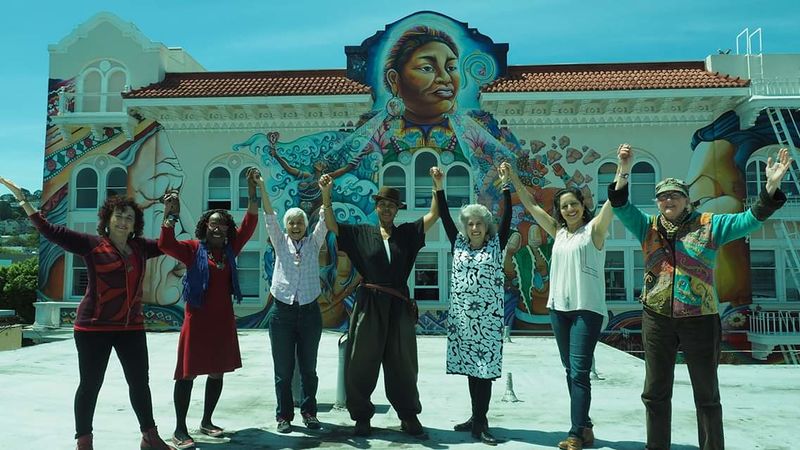 Thirty-five years ago this fall, a small group of women wanted a room of their own. Instead, they got a building.

Fifteen years later, they added the iconic MaestraPeace mural, which begins on the façade with the faces of luminaries such as Audre Lorde and Rigoberta Menchú and now continues inside the door, with the image of an indigenous weaver. The strands from her loom twine together and up the building’s stairway. Each strand is inscribed with the names of women—mothers, activists, lovers, and daughters.

“It makes you feel like you’re walking through the mural. When you come through to the other side, you’re still a part of it,” said Susan Kelk Cervantes, who was part of the team of women muralists who created MaestraPeace. In 2012, the mural underwent a complete renovation, topped with a protective acrylic coat intended to last for the next 100 years.

Just as MaestraPeace is known for its images of women who have changed the world, what goes on inside the Women’s Building is legendary, too.

Owned and operated by women, the Women’s Building was born during the feminist movement of the 1970s, when San Francisco Women’s Centers were organizing a national conference on violence against women. The group had planned to hold the event at San Francisco State University, said Roma Guy, a longtime activist and cofounder of the Women’s Building. But the cultural wars were already under way, and conservatives protested, calling the group lesbians and man-haters. The university caved, and told the feminists to find another venue.

The experience confirmed something Guy had been advocating for a long time—women needed their own space in San Francisco “to heal, be safe and strategize,” she said.

The group bought the building in 1979, but not everyone welcomed the new owners. Some called in bomb threats. Hecklers taunted women as they waited in line for events. And an arsonist’s fire caused $50,000 in damage in 1980. At the same time, the group faced internal struggles around race and politics.

There were other, less fleeting, growing pains. As the Women’s Building expanded its services, a seismic retrofit threatened to close the building and organizers wanted to open a daycare. But the space the center had been eyeing was occupied by a beloved local bar, the Dovre Club, established there in 1966. The Dovre Club’s original owner, Paddy Neal, had had an oral agreement with the nonprofit that his bar could stay as long as he was around. After his death, his successor fought to stay put, until finally relocating to 26th and Valencia streets in 1998, where the bar remains today.

Thus the center survived and grew, and its mission is as relevant as ever, said Teresa Mejía, the center’s director.

“Women have [made gains] and have been able to win a lot of battles. But we still have issues to deal with: issues with men, issues with discrimination, issues of violence,” Mejía said.

Today, the organization has turned its attention to an increasingly pressing concern of its community: gentrification and rising rents. Both clients and employees struggle to find places to live in the city, Mejía says.

Nine organizations call the Women’s Building home. They range from a mobile shower provider for the homeless to a group that helps women get restraining orders to a running club for girls. A day-care center occupies part of the site, along with a food pantry for immigrants and a resource room where women can search for jobs and connect with community services. 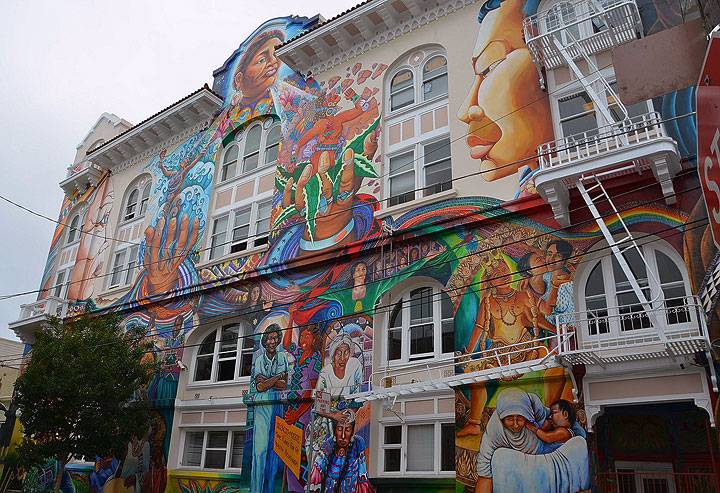 The Women’s Building serves more than 20,000 women and men a year and is often rented out for parties, meetings and events.

“It’s great when you come in and there’s a wedding with a mariachi band in one room, and the bike coalition’s meeting in another,” said Mejía, who first came to the center in 1991.

Like many nonprofits, the Women’s Building has seen hard times, but Mejía says the organization is financially stable these days. Donations are doing well, and owning the building gives it a secure spot and also provides some income.

“Half of our income is from use of space, which is great, but part of the reason we have been financially successful is because we don’t depend on one source of income,” Mejía said.

A 2009 addition to the mural, which took it inside, turned out to be a fundraiser. Today, visitors can buy merchandise and postcards featuring its motifs. When it was first added, donors paid $150 to $200 to add more than 230 names—30 more than planned.

“We were starting to get panicky. We barely got all the names on there,” said Cervantes, who included her granddaughters in the mural.

Sonia Sotomayor’s name is there too, along with the names of Mejía’s mother, sister, and two young nieces, who were all murdered by her sister’s abusive husband in 1977.

The Egyptians believe that saying the names of the dead aloud helps them live forever, she said. “For me, having their names there and being able to say them aloud will keep them with me for eternity.”

When the MaestraPeace muralists first came together in 1994, many of them didn’t know each other well, and the group was diverse in race and age. However, creating the mural bonded the group so strongly that they continue to get together every month.

For Cervantes, extending the mural in 2009 was a chance to work again with friends. Five of the original muralists designed the extension, and three did the actual painting.

“We’re still all together, and that’s important, too. Because of this project we’ve become the best of friends anywhere, for a lifetime,” Cervantes said. 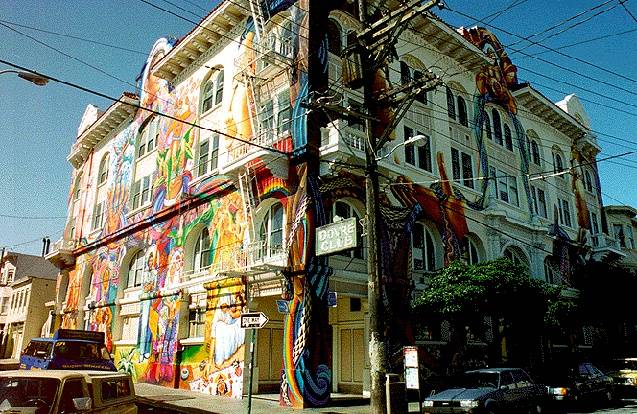 The structure that is now known as the Women's Building was first known as Mission Turn Hall from 1910 to 1935, subsequently became the Dovre Hall, and took on its current name in 1978. The change in the name and use of this building is a clear expression of San Francisco's history as its neighborhoods have transformed in ethnic and social character.

After the 1906 earthquake, the German Turnverein Society commissioned the building but it was also used by other organizations, including the Native Sons and Daughters of the Golden West. Although the German Turnverein Society commissioned the building as an exercise club for "sound mind" and physical education, it may have served as a meeting place for German American radicals. The Turnvereine, or Gymnastics Unions were the largest and expression of German American radicalism in the 1850s. As ownership changed in 1935 to the Sons and Daughters of Norway, the building had already established its continuing reputation as a community center for mixed ethnic and social groups. Now known as the Women's Building, it serves a variety of women's organizations and provides meeting and activity space to the community for events, meetings and support groups.

Reflecting the changes in the community, the Dovre Club, an Irish bar that has been in this site since before it became the Women's Building, fought attempts to close it, but finally the Women's Building prevailed and successfully evicted the bar at the end of 1997. The owners and some neighborhood residents argued for its historical and community value, while the Women's Building intends to use the space for a childcare center to reflect the needs of the immediate community, which has one of the largest populations of youth and children in the city.