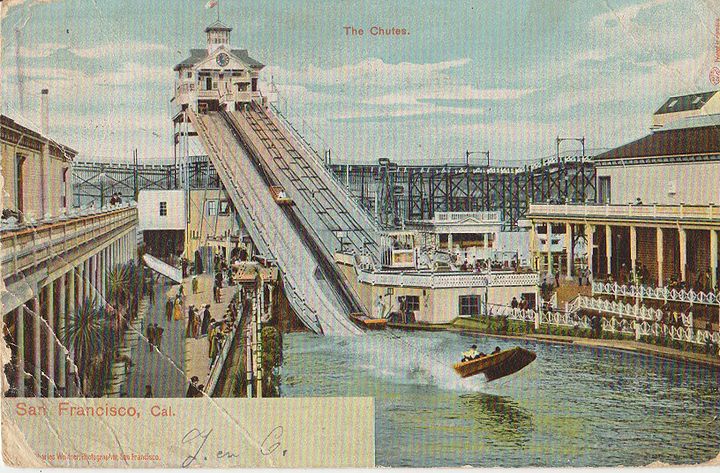 Chutes at Fulton and 10th, from a postcard sent to the Netherlands in 1904.

For seven frolicking years from 1902-1907, the Richmond District was home to the "largest pleasure resort in America" - the Chutes!

First introduced in London as a big toy for the wealthy and called the "Toboggan Slide," chutes franchises appeared all over Europe in the late 19th century.

The thrill of riding a boat down giant water slide and careening into a lake at "a mile a minute" quickly became a big splash in America. Coney Island was the site of the country's premier chutes and on Nov 2, 1895, San Francisco's first chutes opened on Haight Street at Cole Street...

Finding the grounds too small to accommodate the large crowds,... "new chutes" opened on Fulton at 10th Ave. in 1902. The admission charge was a dime for adults and a nickel for children. 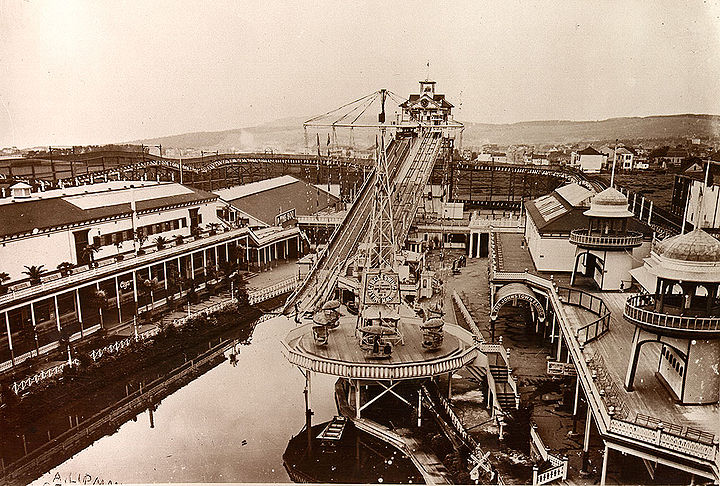 The 350-foot-long water slide operated at full capacity. Passengers were elevated to the top of the chutes in cars seating thirty persons. Once at the summit, riders were rewarded with a breathtaking view - north to the Presidio, south to the San Miguel Hills with the young park in the foreground, east to the cemeteries with the dome of City Hall and Nob Hill in the background and west across the "sand waste" to the Pacific Ocean. Four boats a minute carried eight riders each, screaming to the man-made lake below...

When the Chutes fluctuated in popularity, the owners decided to move to the center of San Francisco. Fillmore was the major commercial street during the City's reconstruction period. So, in 1909, the Chutes opened its third location on the block bounded by Fillmore, Webster, Eddy and Turk streets...

On May 29, 1911, a fire started in the restaurant and destroyed the Fillmore side of the amusement park.

The Chutes amusement park would never open again, although a waterslide called the Chutes was part of Playland at the Beach. That ride was demolished in 1950.