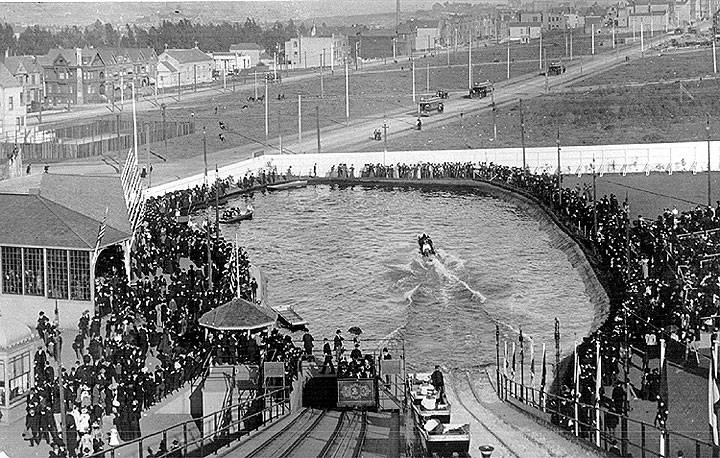 In this picture from about 1895 of the Chutes we can see Haight Street running from the center of the image to the upper right; Page Street is one block beyond. Clayton is parallel to the top fence and runs off to the left, with Ashbury one block above it. 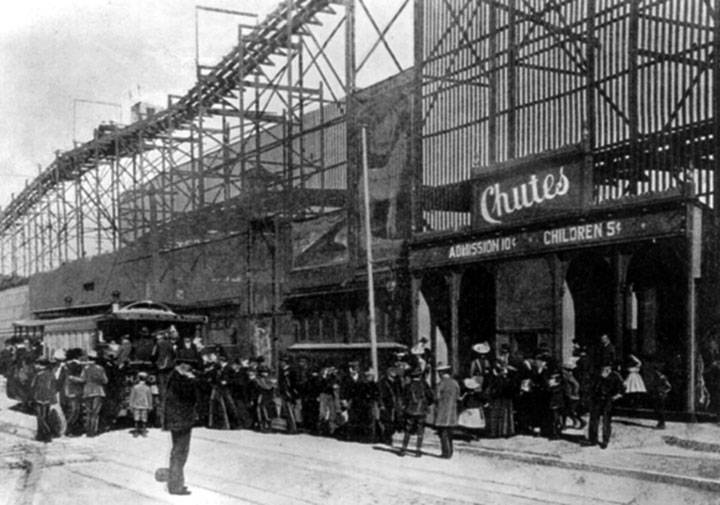 Gate to the Chutes in the Haight, a popular amusement park. 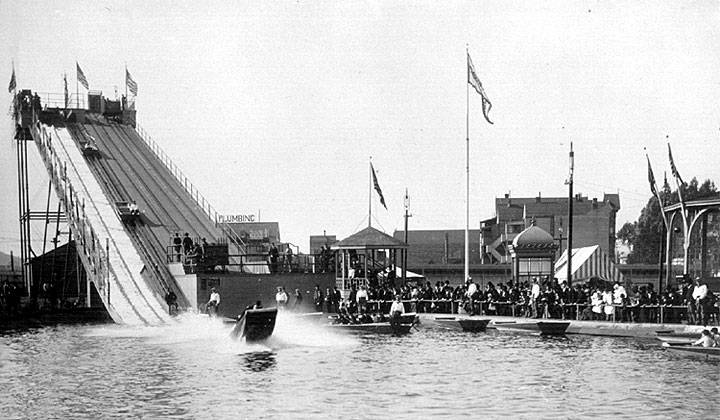 Inside view of the Haight Chutes

It is early morning on a sunny day, November 2, 1895. As the cable car you have been riding up Market Street makes a turn onto Haight Street and passes the Protestant Orphan Asylum at Buchanan, you notice a change of scenery. The houses are farther apart with fields in between where you can see a few cows and horses grazing. As you crest the hill at Baker, you notice the Calvary and Odd Fellows cemeteries off to the North. Buena Vista has been recently reserved as a park by commissioners, Ashbury, Clayton, Shrader, Stanyan and Cole.

Today is the opening of San Francisco's newest attraction, The Chutes at the end of Haight Street and the crowd is already gathering. The skeletal 60 ft. structure stands starkly alone in the early morning sun. The attraction will prove so popular that an elevated model railroad, balloon ascensions, boxing exhibitions and a zoo will be added in later years. It is claimed that the gondola, a boat on rollers, reaches 60 miles per hour as it hits the water of the artificial lake at the bottom of the tower. That's the thrill: hardly anyone has ever gone that fast up until now.

By 1896 on November 19, 13,634 patrons had paid the 10 cents admission for the rip-roaring 10 second ride down The Chutes. That day, Professor Markesburg made a parachute drop nearby while hanging from his teeth. Soon afterward a competitor made a drop hanging by his toes. "Man Fish," ate, drank and smoked under water. Antonio Pirri rode a bicycle down The Chutes and into the lake and was immediately surpassed by "Arion," who pumped his bicycle over a live trolley wire sixty feet above the lake. The courageous Albert Richards thrilled crowds by making a 60 foot dive into two feet of water. In 1897 a theater was added where the crowd was entertained by circus acts. Neighborhood residents could hear lions roaring at night. "Little Egypt" excited the most interest in 1899 with her "hootchy kootchy" dance. 1900 saw many theater productions including Nora Bayes. The fact that she had just finished a successful run at the Orpheum was a sure sign of the Chutes popularity. The year's entertainment ended with a holiday production, "Ten Days in Fairyland" by a juvenile company. At end of the year 1901, a huge Christmas tree was erected bearing a present for each child in the audience.

In 1902, The Chutes had outgrown its Haight Street location and was moved to the Richmond around Fulton and Tenth Avenue.

from the San Francisco Observer, March 1998.