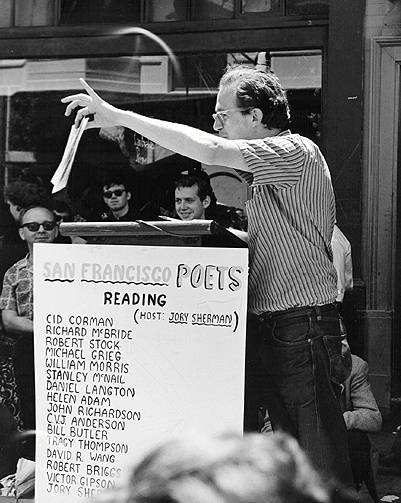 Cloud House continued a long tradition of open poetry readings in San Francisco, as seen here in a Grant Avenue Street Fair in 1959.

One of the more wide-ranging and intense literary venues of '70s San Francisco was The Cloud House, a live-work space hosted by Kush, a New Yorker with a Whitmanesque mission to spread poetry, comradeship, and democracy. After moving to the city he was joined by his wife Hedy, a skilled and promising but non-publishing poet who graduated from Naropa.

The walls were covered with art work, including portraits of Blake, Whitman, Rimbaud, Baudelaire, Dickinson, and other mystics and modernists. Famous poets and unknown writers all spent time in the sage-scented circle of The Cloud House, reading and communing by kerosene lamp, candles, or electric light. Readers and listeners came from all over the Bay Area, the country, and the world----an amazingly dedicated cross-section of "the underground," those mad bearers of truth who articulate, inspire, and cross-pollinate the great currents of progress, resistance, and cooperation.

The heyday of The Cloud House was the late 1970s at 3253 Sixteenth Street, between Guerrero and Dolores. This storefront was eventually taken over by a real estate office, and Kush moved his scene to the Talking Leaves bookstore at 99 Sanchez Street (formerly the site of Panjandrum Books). He later moved to The Farm, a venerable house of community activism next to the freeway at Army and Bayshore, then had a good run on Laussat Street, an alley near Haight and Fillmore Streets, in the late '80s and early '90s, when the weekly round-robins finally came to an end after another move to Pine and Franklin Streets.

Kush published a few anthologies of Cloud House writers, including What Is Real? and Blake Times. He taught anthropology at New College of California for years and has done archiving work for Allen Ginsberg. He has videotaped tons of public readings since the early 1980s, and has accumulated an unequaled record of the Bay Area poetry scene.