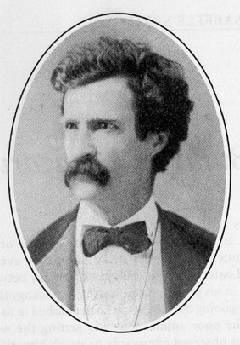 Samuel Clemens as a young man.

It was as Samuel Clemens that he had stepped off the stage coach in Nevada. It was as Mark Twain that he came to San Francisco.

While Samuel Clemens first used the pen name of Mark Twain as a reporter in Nevada on Feb. 2 1863, it was in San Francisco that he adopted his career as a writer. In 1861 Samuel Clemens headed West as a young man of 25. His brother Orion had been appointed secretary to the secretarial governor of Nevada and he settled in Carson City hoping to strike it rich. After a series of failures as a prospector, he became a reporter for the Virginia City newspaper, Territorial Enterprise.

He first visited San Francisco in 1863 and was favorably impressed. "My visit to San F is gradually drawing to a close, and it seems like going back to prison ... after living in this Paradise," he wrote. Some accounts attribute Clemens' move to San Francisco from Nevada to a duel with a rival editor, after which he had to get out of town. But his coming to San Francisco was probably due to wanderlust as much as anything. "I wanted to see San Francisco. I wanted to go somewhere. I wanted--I did not know what I wanted," he wrote in Roughing It.

In May 1864, he arrived in San Francisco by stagecoach. He originally did not intend to be a reporter and writer. He had bought stock in several silver mines and hoped to strike it rich. San Francisco of that time was a boisterous city of 165,000, still flush from the Gold Rush, full of boundless optimism, enthusiasm and greed. He lived at the Lick House and Occidental Hotel, two of the more posh places of the day, looking forward to his impending wealth.

"For a few months I enjoyed what to me was an entirely new phase of existence--a butterfly idleness; nothing to do, nobody to be responsible to, and untroubled with financial uneasiness. I fell in love with the most cordial and sociable city in the Union. I lived at the best hotel, exhibited my clothes in the most conspicuous places, infested the opera, and learned to seem enraptured with music which oftener afflicted my ignorant ear than enchanted it."

But his stock fortunes soon came crashing down. "The wreckage was complete," he wrote. "I was an early beggar and a thorough one." He accepted a job on the San Francisco Morning Call, located at 617 Commercial Street. His beat at the time was lokulitems (local items) -- everything from police court stories to opera reviews, and everything in between. He was the Call's beat reporter, rewrite man and general assignment reporter. His boss figured it was work enough for one and a half reporters, but not two. "It was fearful, soulless drudgery," Twain wrote in his Autobiography. "We raked the town from end to end, gathering such material as we might, wherewith to fill our required columns--and if there were no fires to report, we started some."

He also clashed with his editor on stories, recounting one incident in particular in his Autobiography. Twain witnessed a Chinese man who was chased and stoned by hoodlums under the eye of a policeman who did nothing to interfere. "I wrote up the incident with considerable warmth and holy indignation," Twain wrote. "There was fire in it and I believe there was literature." He was astounded when the article didn't appear. The editor of the paper explained that the Call was "...the paper of the poor; it was the only cheap paper. It gathered its livelihood from the poor and must respect their prejudices or perish .... The Call could not afford to publish articles criticizing the hoodlums for stoning Chinamen." Twain concluded, "I felt a deep shame in being situated as I was--slave of such a journal as the Morning Call."

He foisted much of his work on to an assistant. But his boss saw no need to pay two people for a one-and-a-half person job and fired Twain in October 1864. He soon journeyed to Tuolomne County, to a cabin with friends near the Stanislaus River. He spent three months scratching for gold, but found none. He did find a rich vein of local stories and tall tales and wrote one of them up as "Jim Smiley and His Jumping Frog." He managed to get this published in the New York Saturday Press in November of 1865, the first glimmer of what was to become his national reputation.

He returned to San Francisco having found his life's calling. He was Mark Twain, "a writer of literature of a low order, i.e. humorous." His "poor, pitiful business in life was to excite the laughter of God's creatures." He began writing for a number of California periodicals, befriended Bret Harte, and became part of a literary circle, the Bohemians.

At the time of his first public lecture in October 1866 in San Francisco, Twain was already honing his public persona as satirist, comic character and commentator. In the announcement for the lecture, Twain wrote, "A splendid orchestra is in town, but has not been engaged. Also a den of ferocious beasts will be on exhibition---in the next block. Magnificent fireworks were in contemplation for this occasion, but the idea has been abandoned." But Twain created fireworks of his own with his speech; the sold-out lecture was a rousing success. He toured towns across California to great acclaim.

In 1867 he sailed for Europe as a correspondent for the Alta California. The trip was to be the basis for his first book, Innocents Abroad. The ships manifest listed him as "Mark Twain, barkeeper, San Francisco." In his farewell appearance in San Francisco, he dropped his usual stance of cynicism and satire: "This straggling town shall be a vast metropolis... your waste places shall blossom like the rose, and your deserted hills and valleys shall yield bread and wine for unnumbered thousands."