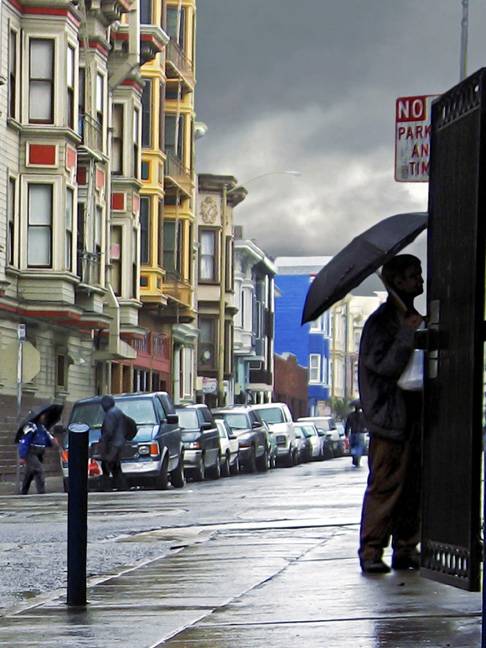 
The building on the far left is the St. Cloud Hotel, a wood frame rooming house above a storefront occupied by the San Francisco Mission, now City Team Ministries, a respite for the City’s dregs that has been in operation for over a hundred years. The yellow building behind the St. Cloud is a wing of the Dudley Hotel, a renovated SRO that now operates as supportive housing. 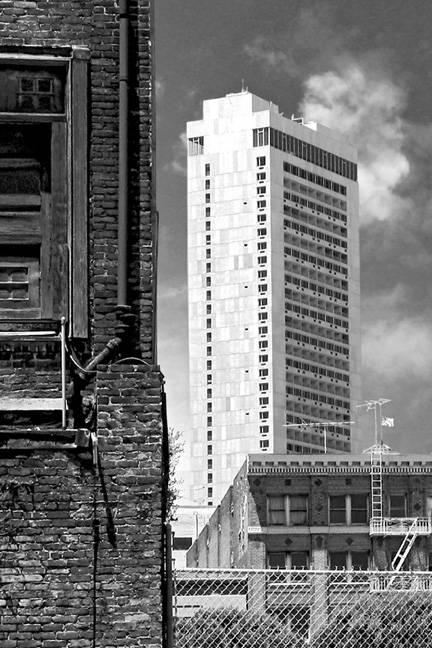 
There are still places South of Market, mostly on narrow back streets between the main thoroughfares, where the buildings have stood virtually unchanged for a century, remnants of a vibrant past, survivors of the slash and burn strategies of urban renewal. 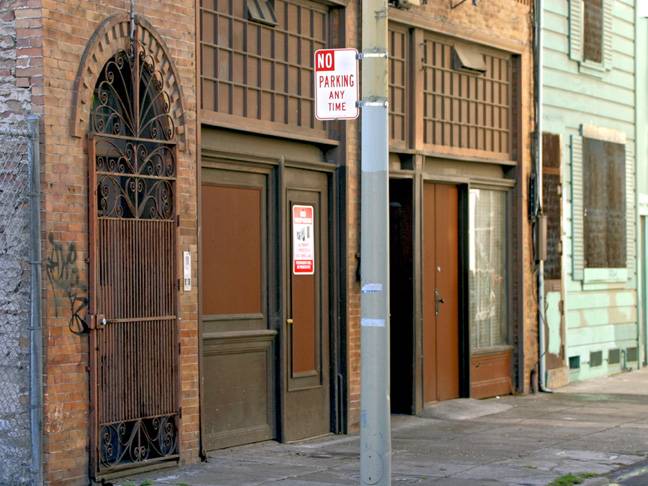 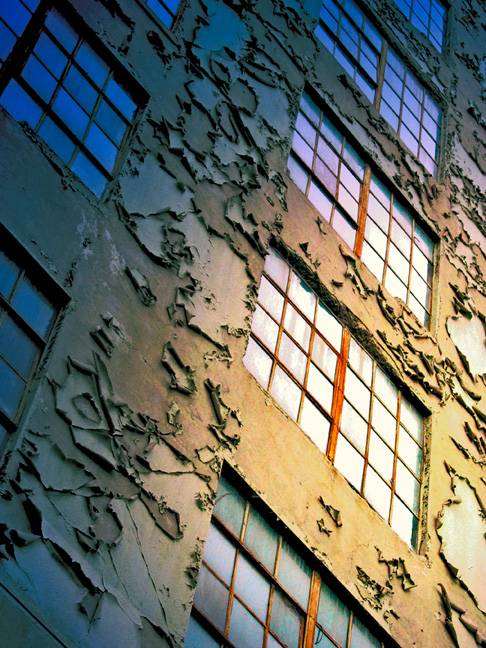 
When the City closed down its Jessie Street fire station, the building was left empty and unmaintained for so long that its sunburned facade began to look like something organic and alive. After I photographed it, the building was transformed into upscale lofts by the Martin Building Company. In memory of the old wall, a large print of this photograph now hangs in their main offices, serving to hinder the old district’s utter submergence in the waters of oblivion. 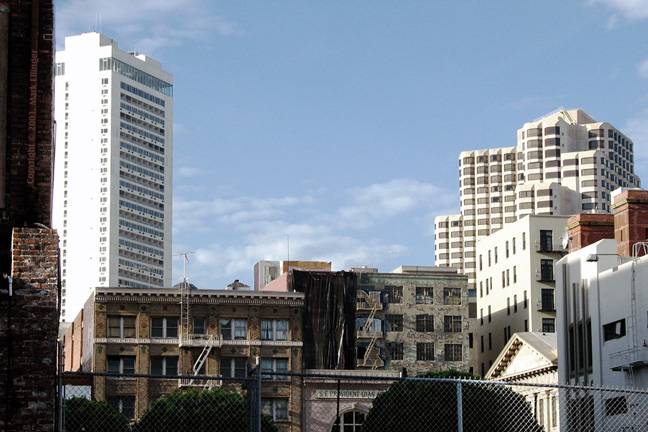 
Looking north from Natoma near its intersection with Mary, one sees from left to right the rear of 447 Minna, the San Francisco Hilton Tower I, the Chronicle Hotel, The Provident Loan Company, the Old Mint’s west pediment, and its red-brick chimneys peering over the roof line of the Chronicle Newspaper Building. Behind the Provident are the unfinished offices of the Martin Building Company, the disused Jessie Street fire station, and condos over-topped by the enormous Parc Wyndham Hotel in the background.


As the long-empty Chronicle Hotel has languished into uselessness, its blade sign has rusted and faded into cryptic hieroglyphics. 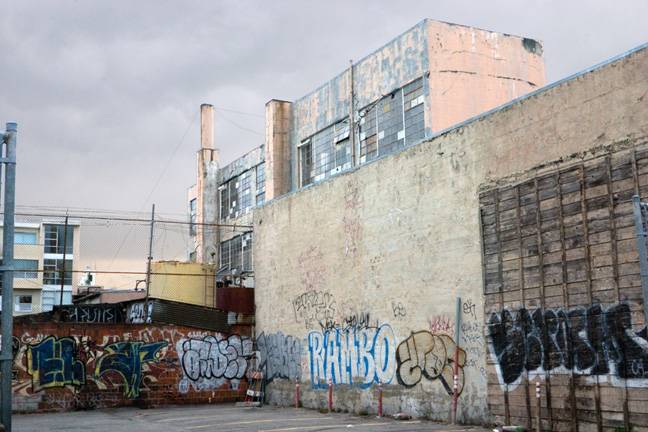 
The raw, post-industrial atmosphere depicted here has, regrettably, almost completely vanished from the South of Market landscape. Many of the old factories and warehouses were torn down during the dot-com boom of the ’90s, to be replaced by gauche live/work lofts and oppressive condominiums that have effaced much of the district’s industrial and working-class history. 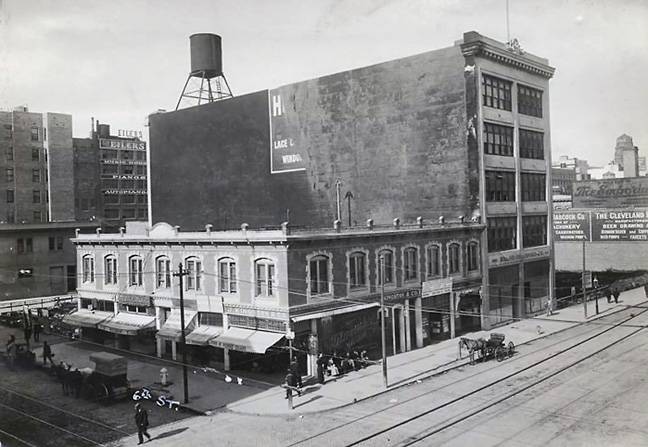 
Partly visible in the upper left corner is the Hillsdale Hotel near Sixth and Jessie. 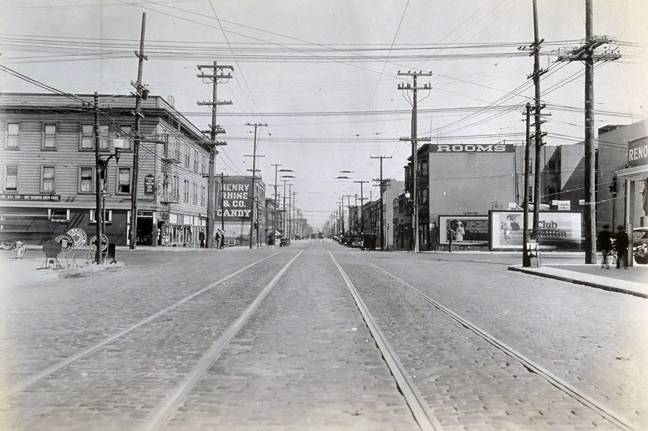 
All of the rooming houses and light industrial buildings pictured here have been demolished. 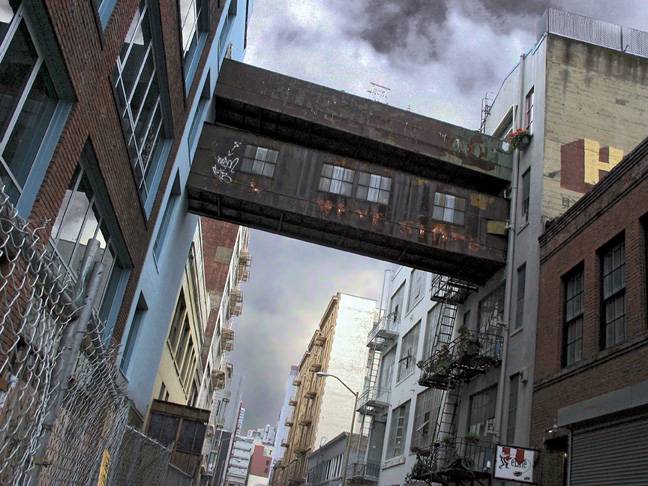 
Spanning Stevenson Street midway between Sixth and Seventh, a covered footbridge connects what used to be Weinstein’s Department Store and the building that served as that company’s office and warehouse space. The department store has been converted into live/work lofts, and the onetime warehouse is now occupied by a dot-com enterprise. I remember when such footbridges were numerous in the back streets of San Francisco, not so very long ago. This is the only one that now remains in the central city.

Chester Gould was the artist who for many years drew Dick Tracy, one of my favorite comic strips when I was a boy. I loved the way he drew urban settings; they were always ominous and foreboding, and the buildings had a tendency to lean inward over the streets, making people appear small and insignificant. He owed a certain debt to film noir, I think, and I owe a debt to his memory for inspiring this picture. 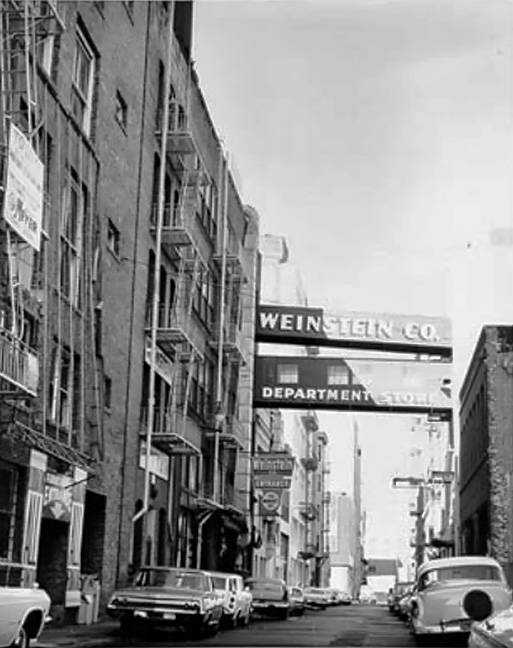 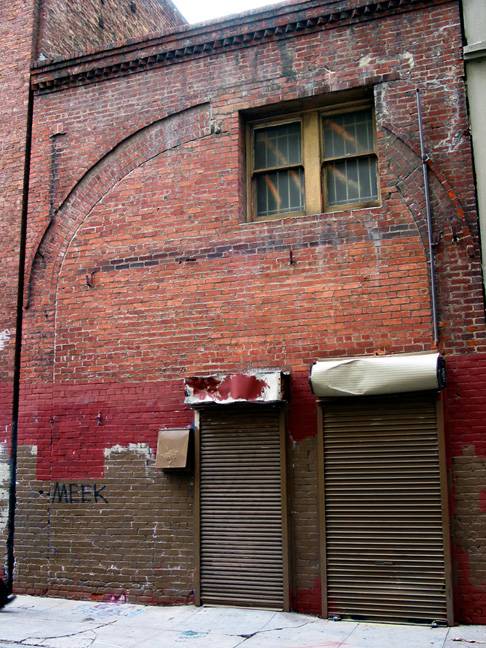 "Imprint of the Past"

Stevenson Street between Fifth and Sixth.


This building’s architectural heritage is revealed by an archway, though its opening was long-ago filled in. The design and complexity of the original brickwork hearken back a hundred years, to a time when horses were still in common use. Sadly, this humble but charming example of post-fire architecture will soon be demolished, to make way for a strikingly unattractive, five-story shopping mall and parking garage called CityPlace. 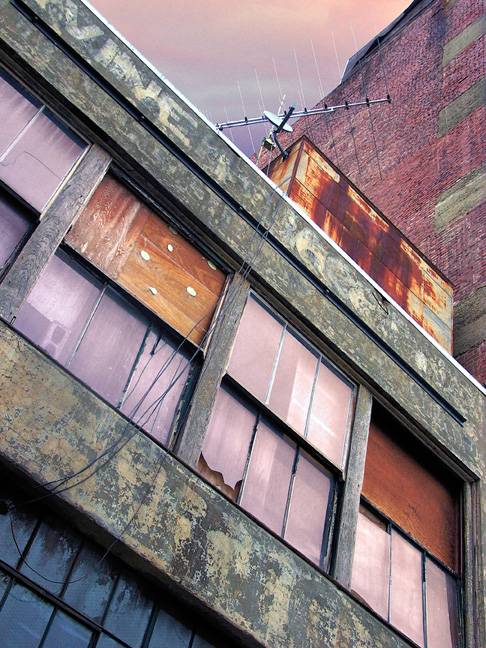 
The day I photographed Fascination’s service entrance promised to be beautiful and sunny. I savored the early morning quiet as the fog began to burn away with the rising of the sun, exposing more blue sky by the minute, signaling the impending demise of the dawn’s pink light. Of the many photos I took, these two captured the magic of Aurora’s brush. 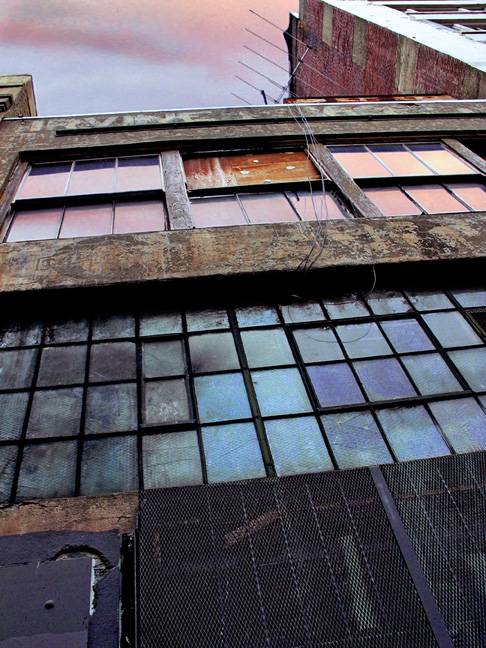 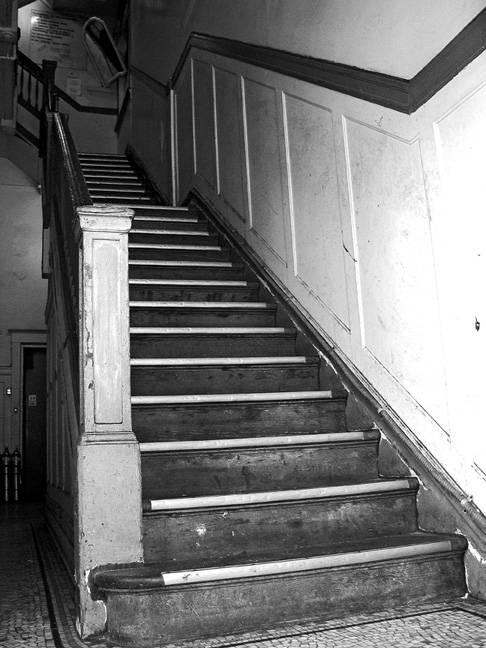 
Residential hotel interiors are not easy to photograph. In general, the managers of SROs are strongly, sometimes violently, opposed to any public exposure of themselves or their buildings. This forbidding stairway leads to the rooms in the Sunnyside Hotel, a place where ghosts linger in dark corners and on the landings. 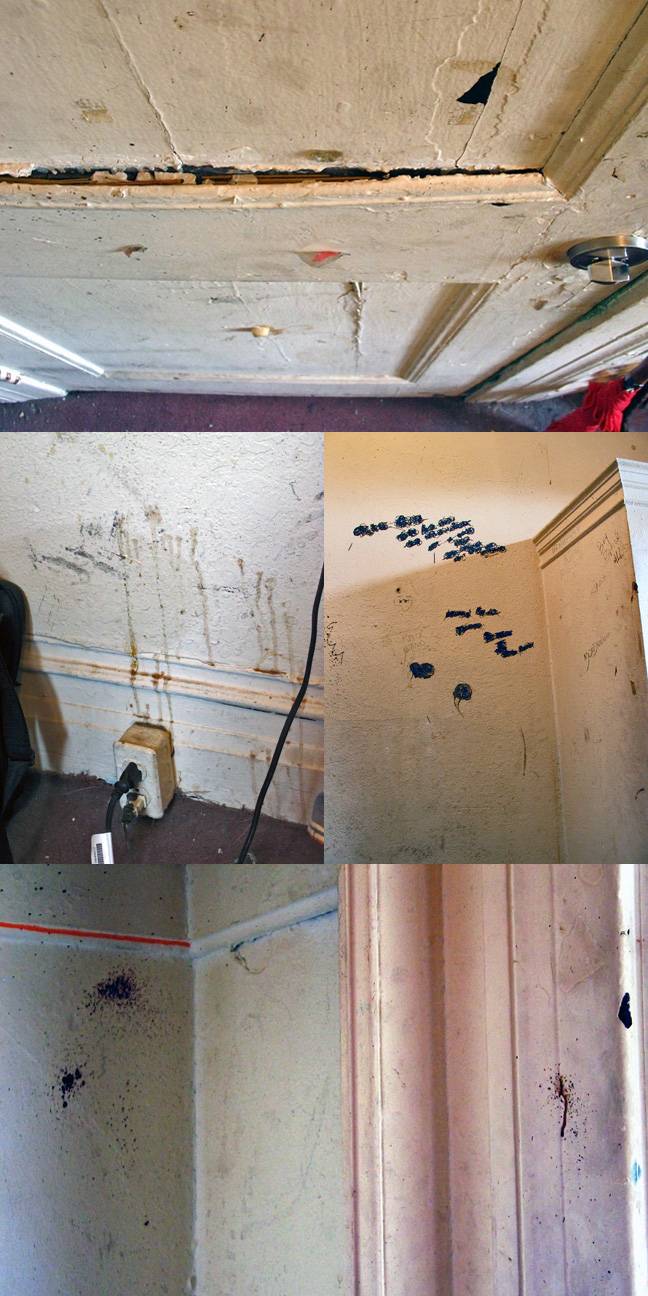 
The conditions shown here are these days fairly typical of the profit-driven Sixth Street hotels, and though a few are much better, there are some that are far worse. Monthly rent in 2010 for an equivalent room is commonly between $700 and $900. In case you are wondering, the dark-brown splashes on the walls are blood. 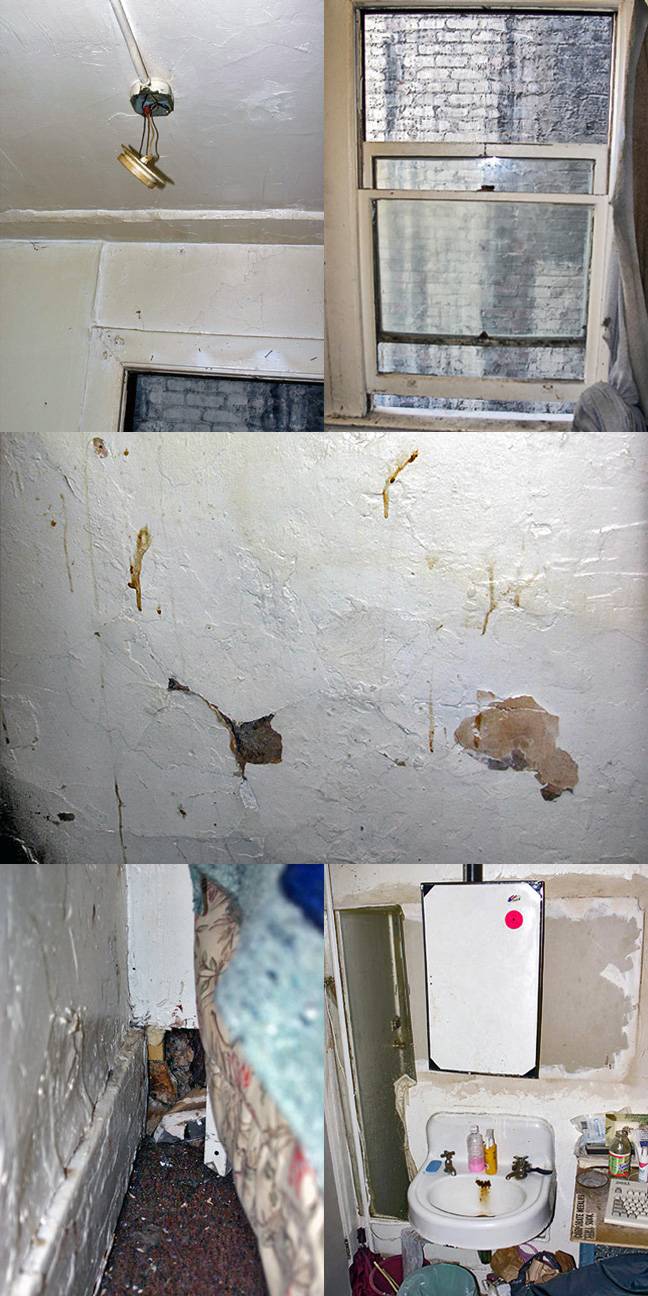 
Early in 2006 I was contacted by a tenant at the Desmond Hotel because the manager had refused to either make his room livable or give him another room, and the tenant wanted photographic documentation for legal purposes. Happy to be of assistance, I later met him in his room, which the Departments of Building Inspection and Public Health had each given a “pass.” 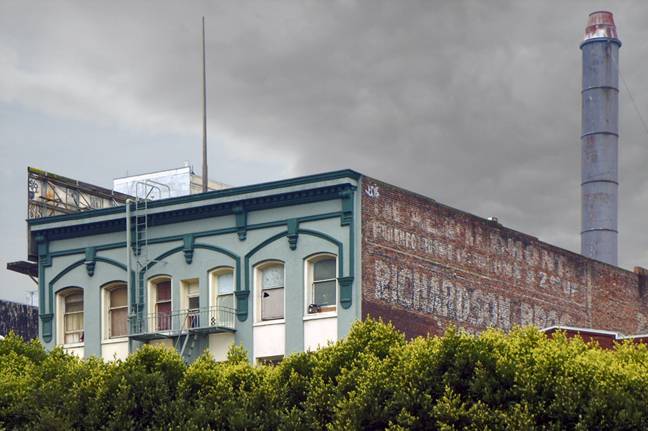 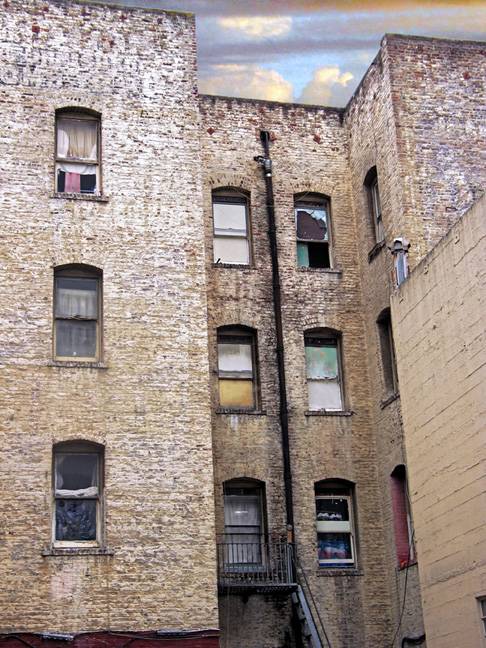 
As seen from Jessie Street, the rear of the Alkain Hotel betrays the living conditions inside. Legend has it that the back streets in this area were named for some of the prostitutes who were popular in the days of the Gold Rush, but though in their own way charming, such stories are apocryphal. Jessie Street, for example, was named for the wife of nineteenth-century explorer and California politician John C. Fremont. 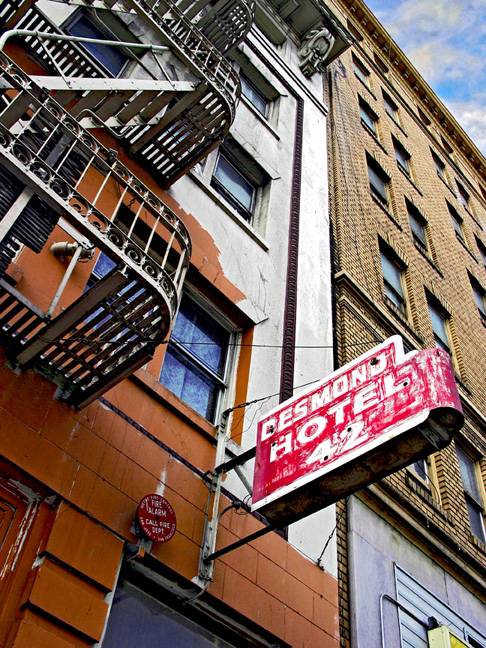 
Having been consigned to History’s dustbin in the name of alleged improvement, most of Sixth Street’s old blade signs have disappeared, to be replaced by cheap canvas awnings and marquees. Gone is the sign for the Desmond Hotel, and the canvas marquee that replaced it is already faded and damaged. 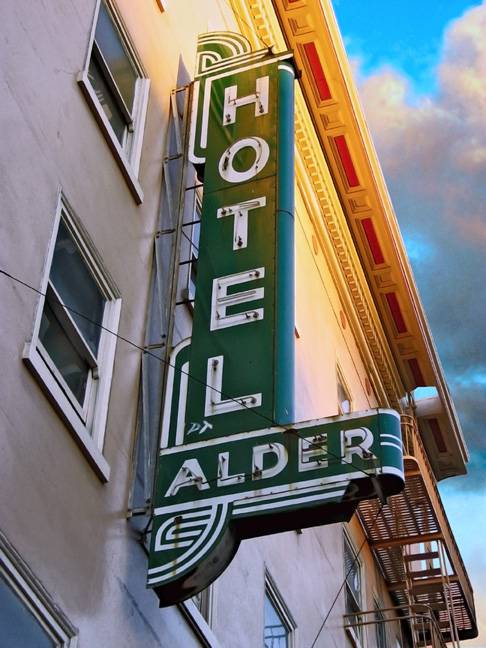 
Of the few blade signs that remain, the Alder Hotel’s is the finest. It was restored when the hotel was refurbished in 2006. 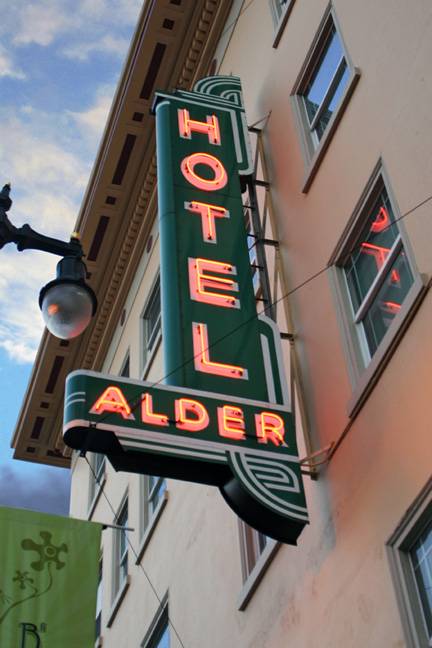 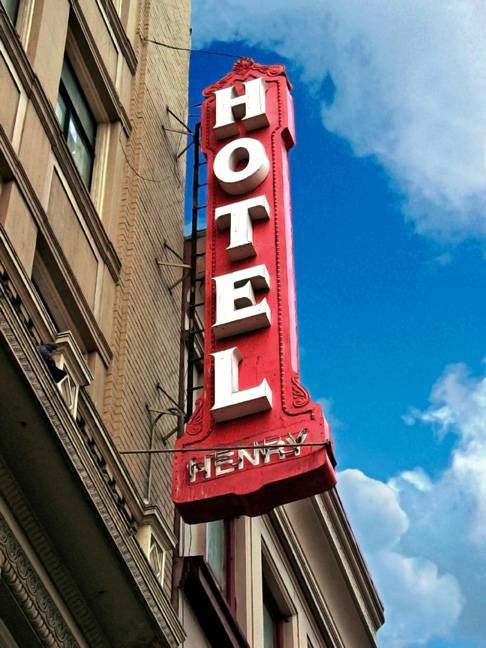 
Though not restored, the Henry’s blade sign is still in good repair. 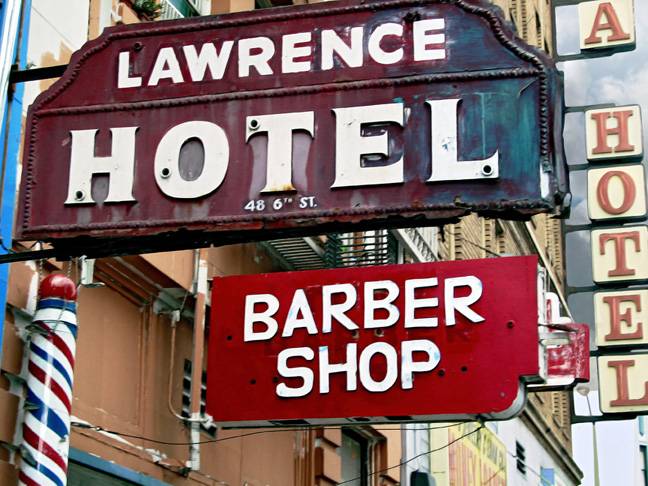 
With this photograph, my commitment to this project began. Shortly after I captured this image, the sign for the Lawrence Hotel became landfill. The old Desmond Hotel sign, taken down a year later, is partly visible behind the coarsely made-over barber shop sign (for its former appearance, refer to the next photo). 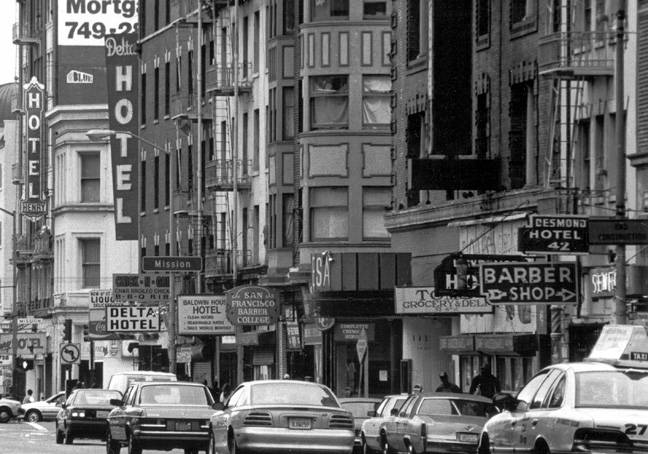 
All but three of the blade signs pictured here have been removed and among those that remain, the barber shop sign has been ruined. 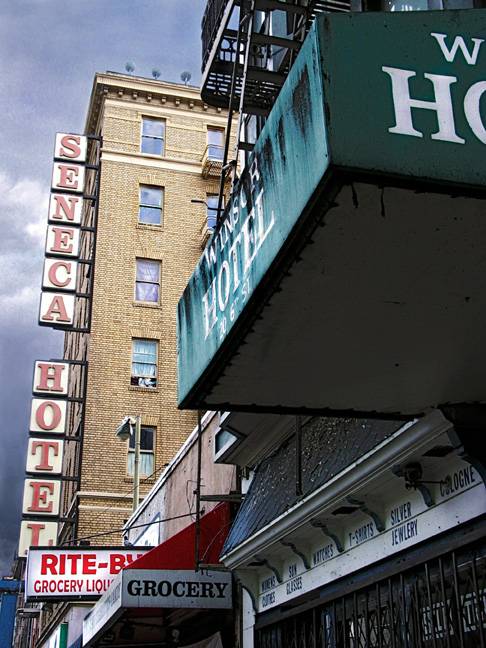 
Grady’s was a very popular bar that for many decades opened into the lobby of the Seneca Hotel. While its run-down appearance in more recent years may have qualified it as a dive, it was in fact an important social hub for the neighborhood’s older residents, serving as living room and even dining room for folks whose homes consisted of a single small room. After the Seneca became a master lease hotel and management was taken over by the Tenderloin Housing Clinic, Grady’s was served with a three-day eviction notice. It closed its doors for the last time on St. Patrick’s Day 2002, leaving many of the community’s seniors without a place where they could meet and socialize. Since then, nothing has been done to address that need. Their social lives erased, it is as if these people never existed; they are rarely, if ever, seen anymore. All that is left for them is the solitude of their lonely rooms. 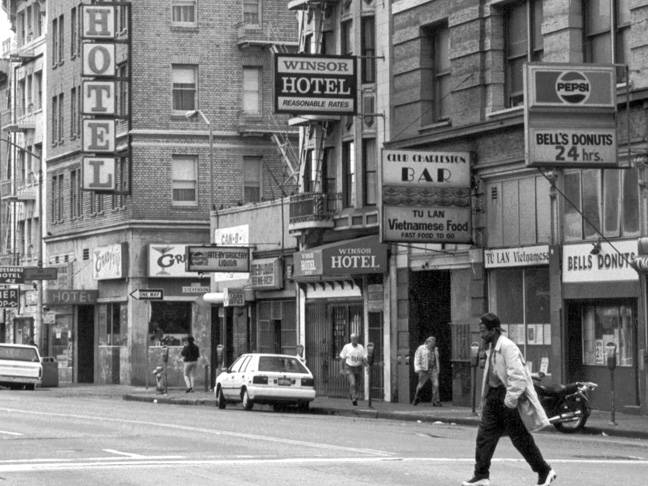 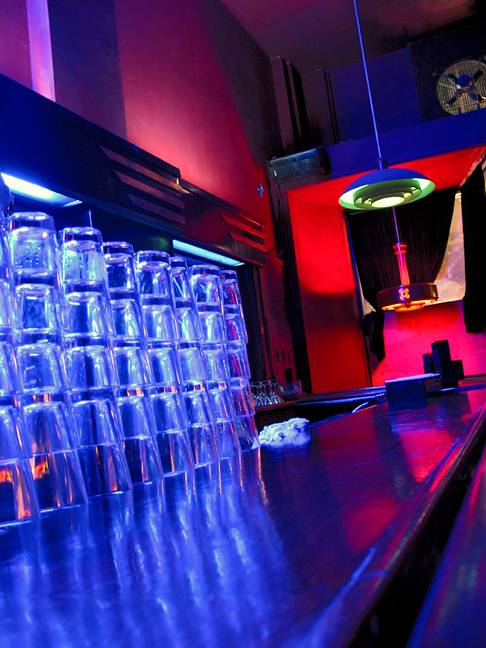 
Less than a year before I captured this image, the Charleston was a neighborhood gathering spot, a place to socialize for the people who live in the area’s hotels. Near the end of 2002 the proprietors sold their liquor license to some young entrepreneurs, and the Charleston became the Arrow, which became the Matador in 2007, and is now in 2010 the Show. Within a year of the Charleston’s closing, every other bar on Sixth Street had closed, to be later reopened with new names, catering to a very different clientele.

My friend Jim Ayers, a resident of Sixth Street since the mid-90s and manager of Grady’s until it closed, kindly helped the Charleston’s new owners get started. For a couple of years he worked the opening shift, and I would drop in for a pint now and then while he was working. One of those times I took some photographs of the bar; this one is my favorite. 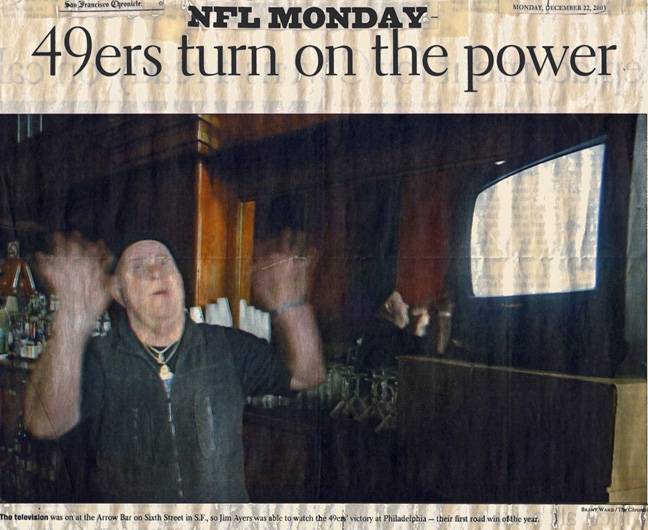 When a fourth of the City’s power was knocked out for several days by a Mission Street substation explosion in 2003, Jim fired up his portable generator at the Arrow, tuned in the 49ers game, and grilled steaks for patrons on his barbecue, making the Arrow the only place for miles around that was open for business. In this Chronicle Sports Section front-page photo, Jim was actually bemoaning a 49ers touchdown—not the other way around, as the caption would have you believe. 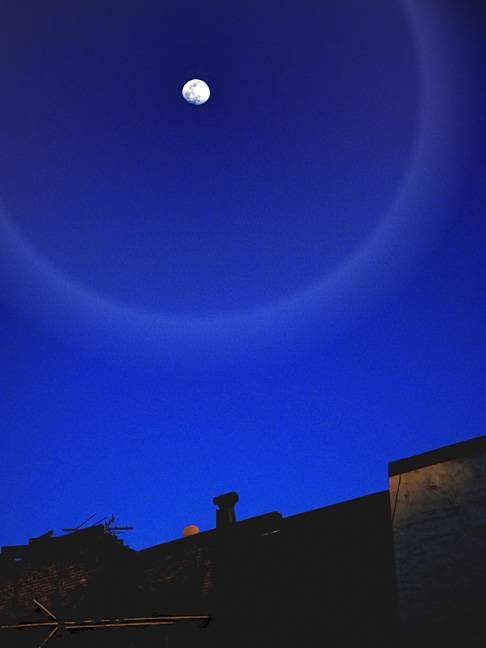 
On a cloudless April evening in 2004, I stood in front of the Arrow, talking to Jim. The sun was setting as we talked, and as the sky grew darker I saw that I could capture the waxing moon just as the sun disappeared below the horizon. What appeals to me about this image is its simplicity: just the dark roof line of the Hillsdale, faintly highlighted by the last red rays of sunlight, and the moon in a clear, ultramarine sky. 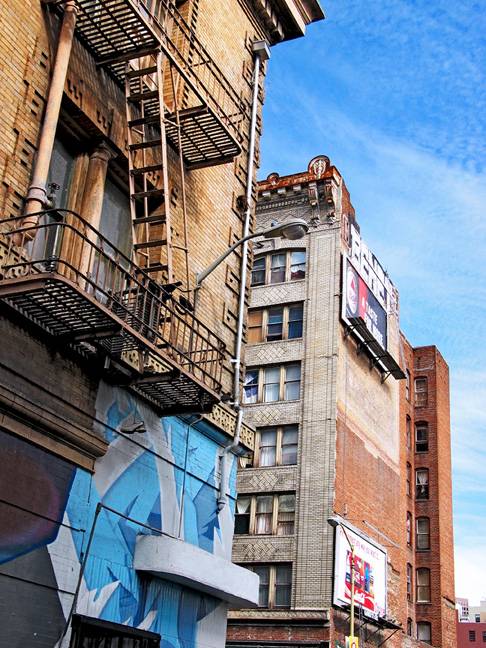 
After Angel Cruz was barred from associating with any NASD* member in any capacity for his stock market shenanigans, he used his ill-gotten gains to open Club Six on the ground floor of the Lawrence Hotel. A decades-old neighborhood bar called Frisco was transformed by Cruz into a loud and trendy nightclub, patronized by rowdy hipsters and suburban gangstas getting their kicks by slumming on Sixth Street. Frisco was an affectionate way of referring to the home port used by the merchant marines who once populated Sixth Street’s SROs; it was a name I loved for its in-your-face appeal to the bar’s clientele. Alas, that pride of place has all but entirely vanished, having been replaced by the ethos of the disaffected and the morés of the culture of greed.