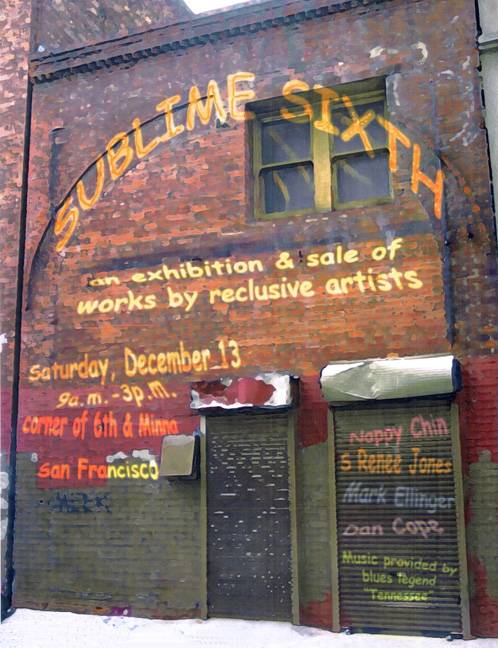 
Around ten months after I’d begun photographing my surroundings, I had a group show with two of the founding members of the Sixth Street Photography Workshop, Nappy Chin and S. Renee Jones, and a former resident of the Auburn Hotel, Dan Cope. 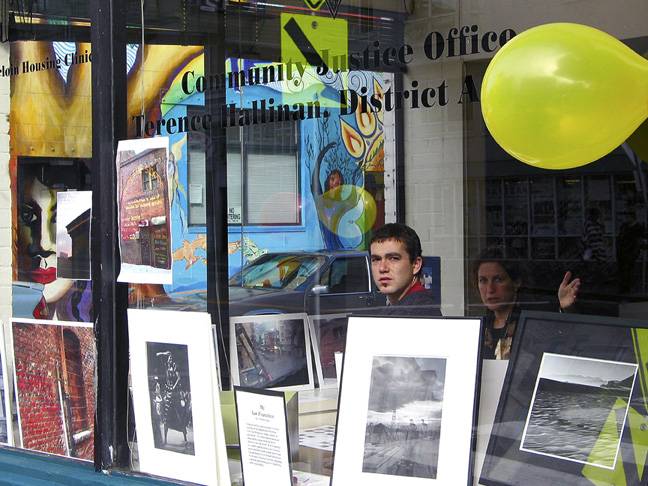 "Sublime Sixth" exhibit, December 2003. An unidentified visitor and Joann Babiak inside the Community Justice Office at Sixth and Minna.


The exhibit was in DA Terrance Hallinan’s Community Justice Office run by Joann Babiak, at that time an Assistant District Attorney and one of the founders of Positively Sixth Street, a community fair that sadly ended seven years after it was begun. 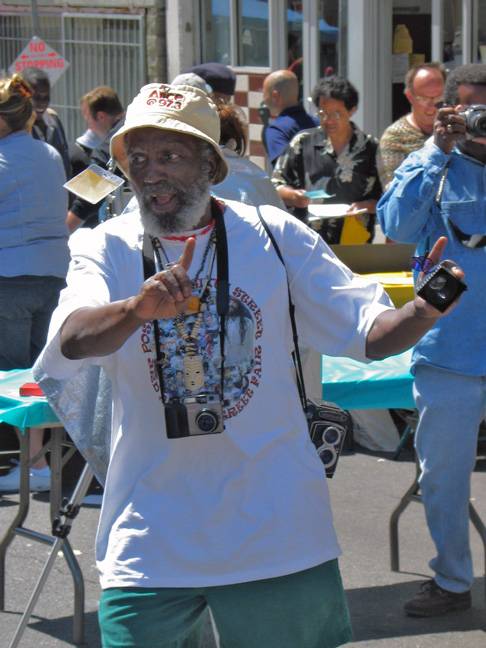 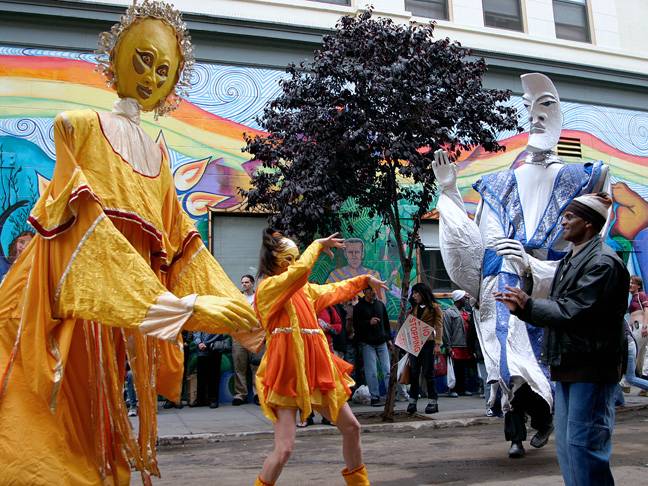 Positively Sixth Street, 2005. A fair-goer dances with the Sun and Moon Ensemble that graced the fair several years. 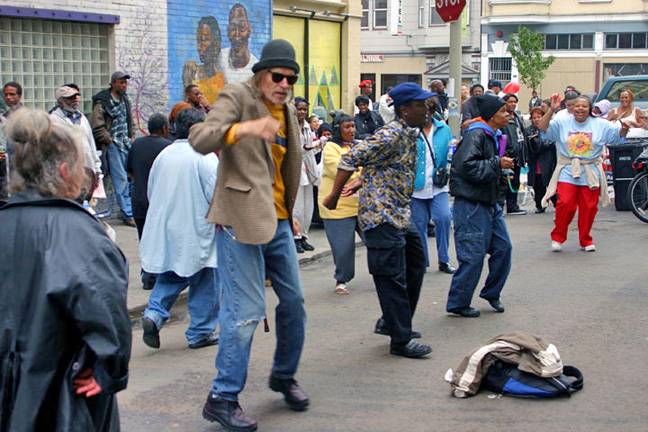 Positively Sixth Street, 2006. Sixth Street residents rock to the music of Bobby Webb, a perennial favorite among the fair’s headliners. 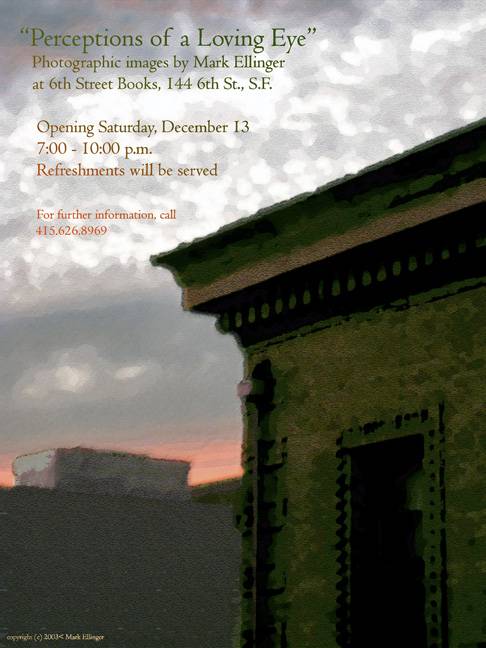 
One of my earliest photographs, the Lawrence Hotel at sunset became the poster for my first solo exhibit—on Sixth Street, of course. 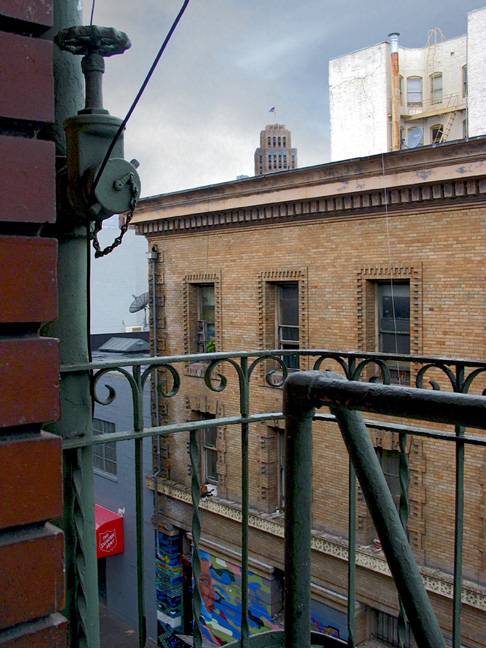 
Looking across Jessie Street from my fire escape, I could see the Seneca Hotel behind the Lawrence, and the McAllister Tower in the distance. In the time I lived at the Shree Ganeshai Hotel, I had a very close relationship with that fire escape. 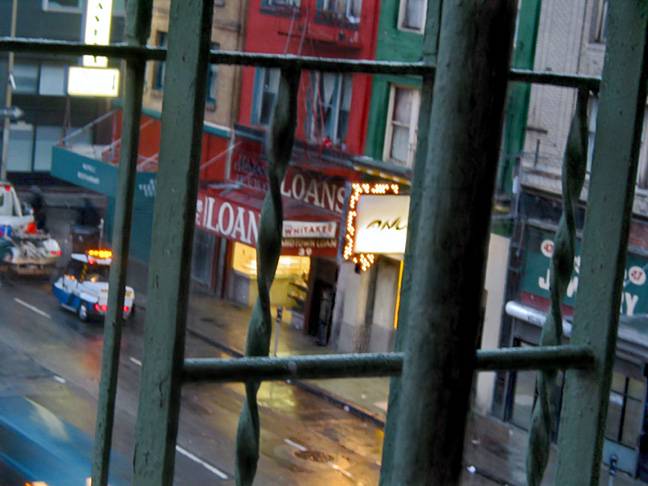 
This photo of a wet evening in late autumn is for me a living image. I hear the sounds of traffic on wet pavement, footfalls on the sidewalks, and the faint staccato of light rainfall. The traffic whizzes by in a darkening world that feels so comforting to me, as though Mother Earth were tucking me in for the night. 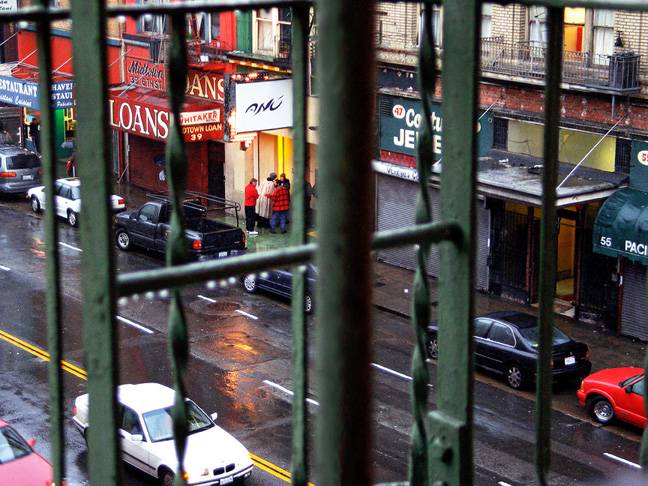 
On a wet December evening the following year, I captured this little scene going down in front of what was once another neighborhood gathering place, Ginger’s Too. 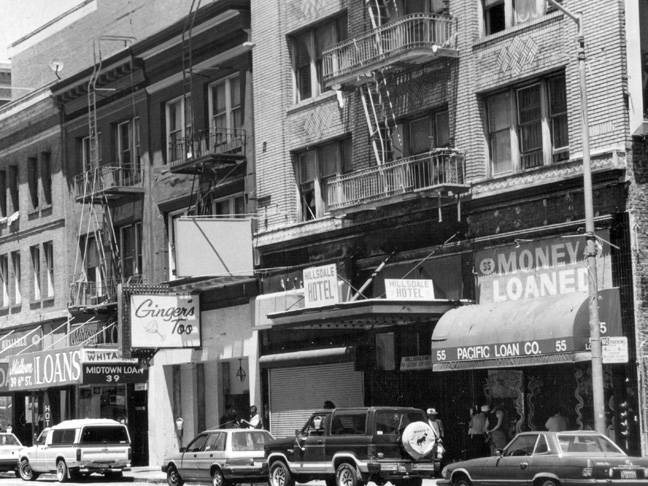 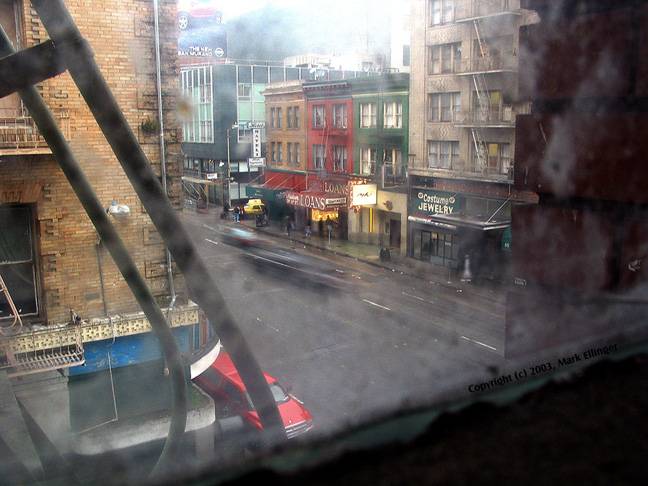 
For all its problems, Sixth Street has an unquenchable vitality. The day may be cold and rainy or warm and sunny, but the activity on the street remains constant. The weather was wet and blustery when I took this photograph. I liked the way the grime and soot, which for decades had accumulated on the window, imparted the look of a watercolor to the street scene below. 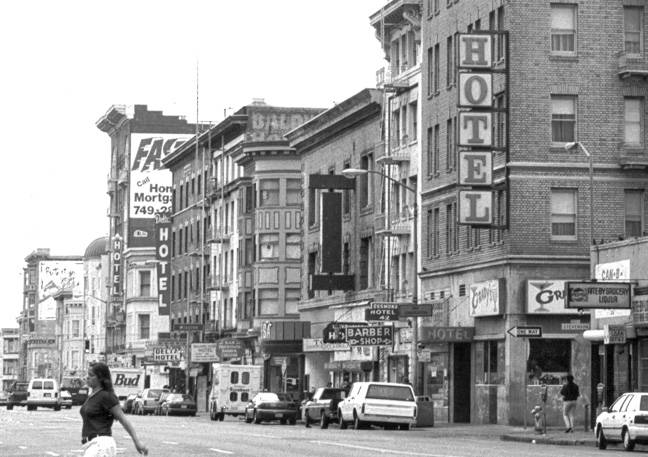 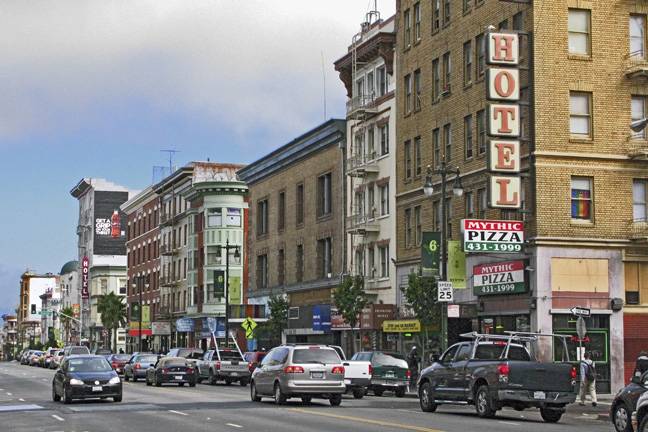 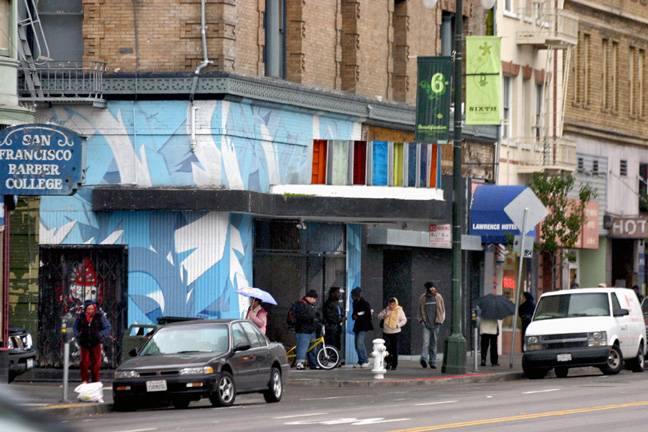 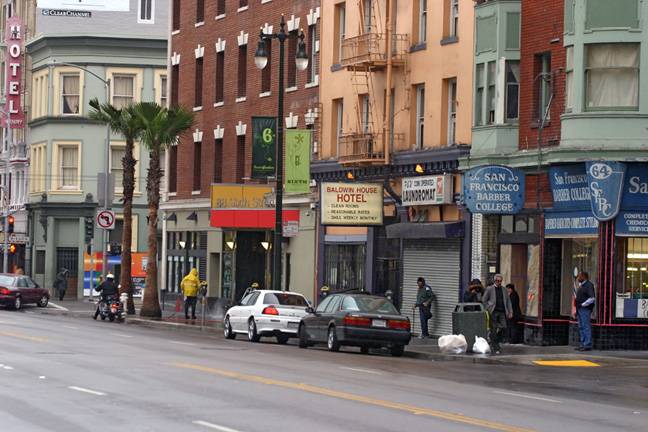 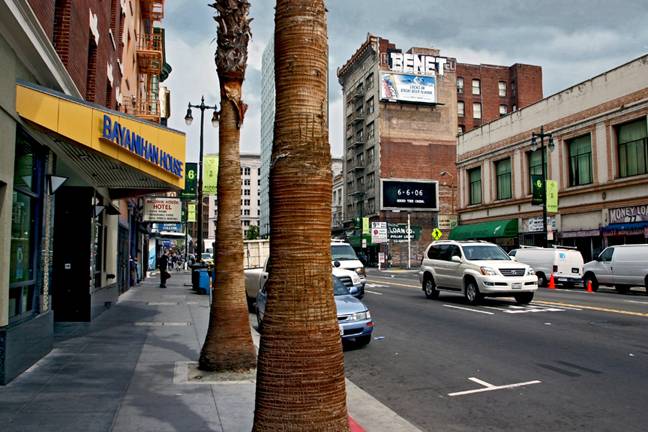 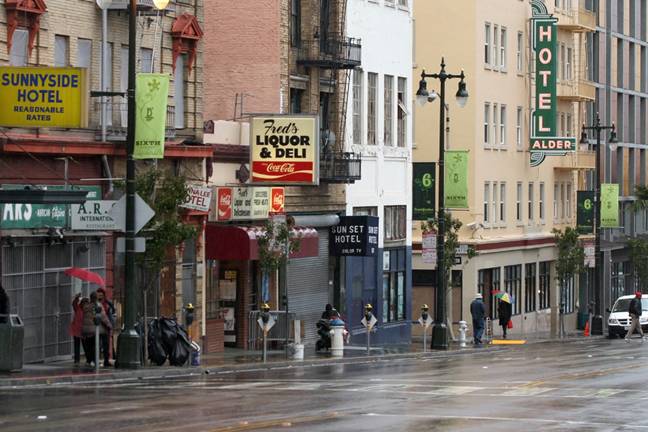 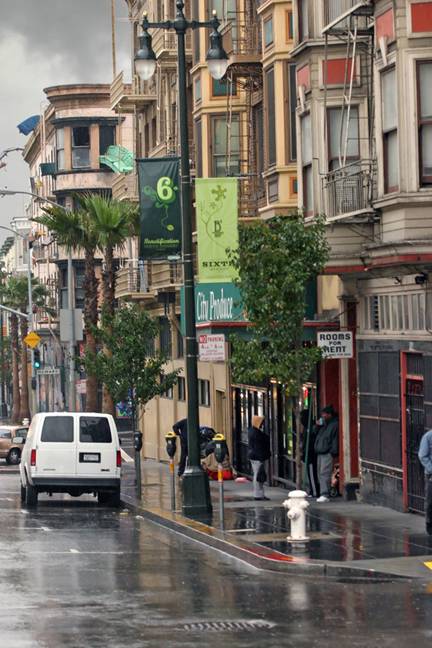 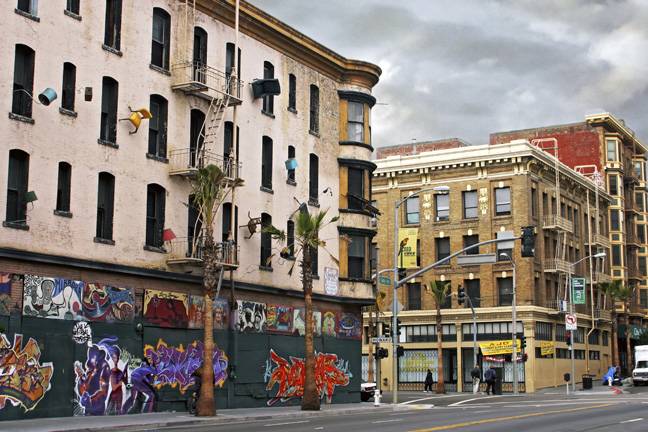 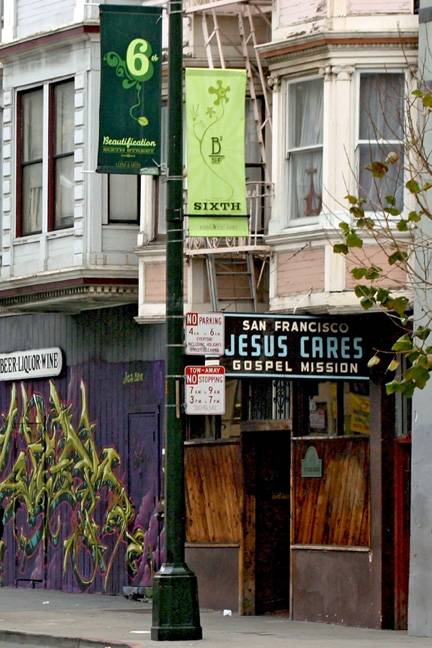 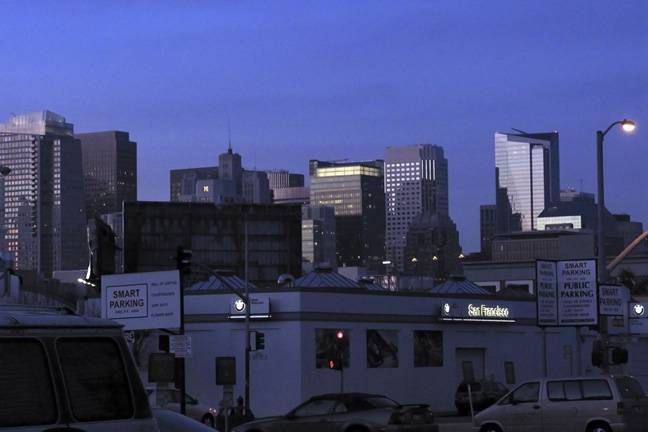 
As seen from the bottom of Sixth Street, the Manhattanization of downtown San Francisco has almost entirely obscured the beautiful Beaux-Arts architecture that once defined its skyline. Soon, very soon, the ground swell of modern urbanism will wash over Sixth Street, expunging a small and overlooked yet nonetheless significant part of San Francisco, leaving only memories in its wake.

In the time that I lived on Sixth Street, many people’s paths crossed mine. Although there are far too many to mention them all, my portrait of Sixth Street would be incomplete if it didn’t include at least a few of my more memorable encounters. Each person in the following stories has added depth and meaning to my life; they have each in their own way inspired me. Through them shines the soul of Sixth Street. 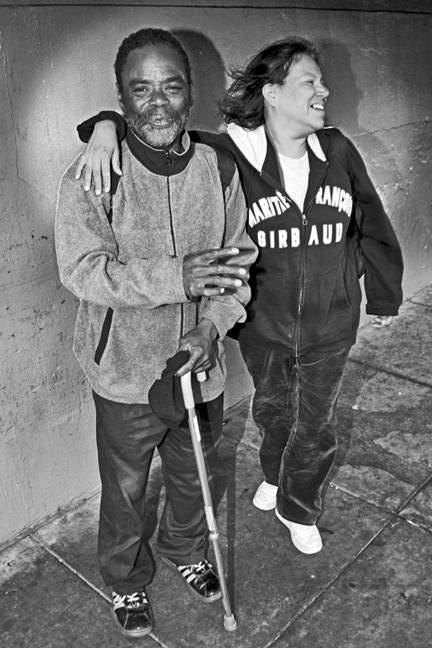 
The sun had disappeared behind a shroud of fog that scudded by in great swirling drifts, like the sails of a phantom armada. What had been a warm day was quickly becoming cold. Sixth Street between Market and Howard was all noise and hubbub, but beyond Howard Street the chaos subsided and the sidewalks were empty. As I walked past the rotting hulk of the Hugo Hotel, I overtook a lone pedestrian, a man with a cane, burdened by a backpack and a duffel bag. Moments later, from behind me he called, “Hello? Hello?”

The man sounded genuinely distressed, so I retraced my steps to see if I could help. Even from a distance I could see that he was troubled. I saw it in the lines of his dark-brown face and in his eyes, but when I stood before him, he seemed hesitant. He tested the water by asking me how I was feeling. Then, apparently encouraged by my friendly response, he said, “I’m still Bill.”

Whether that meant his name was Still Bill or that he remained Bill, I couldn’t tell, so I just asked, “Still Bill?”

With a voice that softly rattled like pebbles beneath a flowing stream, Bill answered,


Had a wife named Lucille,
Had us a home down in Mobile.
Come the war in Vietnam,
They sent me off and made me kill.
Come back a broke-up man,
Weren’t no more home, no more Lucille.


She’d gone and left me, but I’m still Bill.

Someone had told Bill a shelter was nearby and he’d become lost trying to find it. I said I would show him the way, offering to carry his bag while we walked. Bill had been drinking and was unsteady on his feet, obliging us to stop several times as I helped him regain his balance. I put his arm through mine when we crossed the street, for traffic was heavy and I was afraid he’d stumble into the path of a speeding car. When Bill expressed gratitude, it went straight to my heart, experience having taught me that when you’re homeless, penniless, lost and alone, most people ignore you.

The municipal shelter was in an old industrial building at Fifth and Bryant. As we neared the entrance at the back of the building, I asked Bill if I could photograph him. The only other person in sight was a distant figure walking toward us along Fifth Street, a Native American woman who soon blithely joined us, though she was a stranger to both Bill and me.

To behold her was to like her. The light of kindness shone in her eyes. Her smiling countenance was open and serene. She was thickset and earthy, yet her hands were slender and sensitive, and she moved with the suppleness and grace of a dancer. Seeing that she was curious, I explained I was photographing Bill to commemorate our encounter and suggested that I could also photograph her. Much to my delight, she went straight to Bill’s side and gently put her arm around his shoulders. This made Bill self-conscious and awkward, so I played the fool to distract him while I shot numerous frames to capture him in an unguarded moment. Manifest in every photograph I took are the woman’s radiance and warmth, and her compassion for Bill. Before I departed, she told me she’d look after Bill inside the shelter.

I don’t know her name. For all I know she doesn’t have one. I never thought to ask and would probably have forgotten it anyway, because most names in and of themselves are largely meaningless. We remember people by their actions. I will always remember her for the light and love she shared with Bill and me. If such things as angels exist, she was surely one of them.

In Praise of a Hero 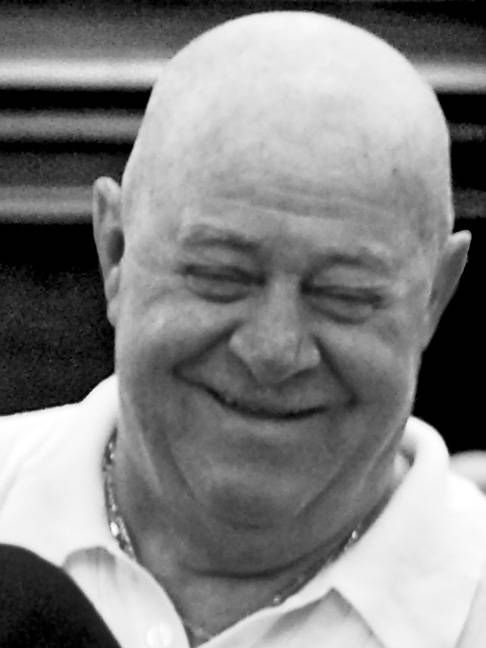 
I could talk for a long time about Jim Ayers. His life story is not just remarkable, it is truly inspiring, like a tale written by John Steinbeck or Mark Twain. HL Mencken would have loved him. As I have only two minutes to speak, I’ll give you instead the simple, unadorned reasons that Jim is so highly deserving of this award, which I am enormously pleased to be presenting to him.*

Integrity: Jim is the living, breathing definition. He is, without question, the most trusted person in his community. Jim may be a man of few words, but you can be certain that what he says will always be the truth. Blunt, gruff and unpolished, Jim is also one of the most lovable persons I have ever known, and he has a heart to match. A more compassionate man you will not find. Best of all, Jim shares these virtues with his community.

During the eleven years that he worked there, Jim made Grady’s a comfortable and safe haven for the many seniors who live on Sixth Street. It was, in fact, the only place in the neighborhood where they could escape from their lonely, cramped hotel rooms to socialize, have their morning coffee and read the paper. For Jim, tending bar was entirely secondary to providing for the social needs of Sixth Street’s seniors.

Jim has fought tirelessly and single-handedly for the rights and welfare of the tenants of the Lawrence Hotel, where he has lived for the past fourteen years. After years of thankless, solitary struggle at City Hall and in court, and in the face of intimidation, property damage and physical threats, Jim is winning the battle to force Club Six, the bane of Sixth Street residents since it opened, to comply with noise and public nuisance laws. No one has done more for his community than Jim Ayers, a man I am proud to call my friend.

∗The text is a speech that I gave when presenting Jim with a Community Leadership Award in May 2007. Regarding the photograph, Jim hates having his picture taken, so he’ll make faces or look away if he’s aware of the camera. In order to catch Jim off-guard, I photographed him through a crowd of people from across the Board of Supervisors chambers at City Hall, hence the grainy and tightly cropped image. 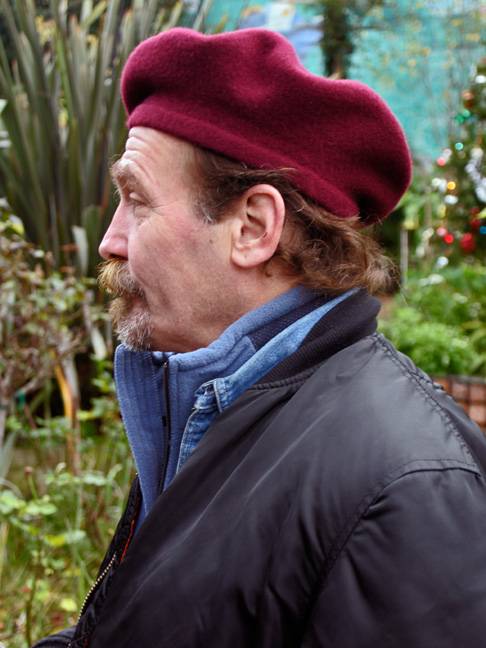 
Jeoflin Roh was a founding member of the Central City Restorative Justice Project, the Central City SRO Collaborative, and the Positively 6th Street Community Fair. Dedicated to improving his community, Jeoflin had “been there and back.” I know, because for seven years he was also my friend. Jeoflin was fifty-seven when a brain tumor claimed his life in midsummer 2008.

My initial encounter with Jeoflin was at the original Turk Street office of the Central City SRO Collaborative, when it was still a fledgling organization. It was my first visit there and the only person around was Jeoflin, who was sitting in the sunshine just outside the open back door, smoking a hand-rolled cigarette and reading a book. Jeoflin’s picturesque appearance was his trademark. What caught my eye that day were his distinctive mustache and goatee, his lurid Hawaiian shirt, and the huaraches and Panama hat he wore on sunny days. What won me over were his warmth and sincerity, his wittiness, and his quaintly eccentric demeanor. It was very easy for me to like Jeoflin.

As things turned out, Jeoflin was with me when I first downloaded my photos from the castoff plastic camera with which I began shooting Up from the Deep. I was appalled by the small and muddy-looking images, but Jeoflin ignored the toy-camera flaws and saw only my subject matter and framing. His enthusiasm kept me from tossing that little camera right back where I’d found it, and even now I find encouragement when I think of the ardent appreciation for my work that he expressed up to the very end. Thus Jeoflin lives on in my memory; and now through these words of remembrance, he’ll live on when I am gone.

To live without fear of death, life to its fullest,
Is to live each moment as though it were our last.

Thus did Jeoflin, and so may we all.