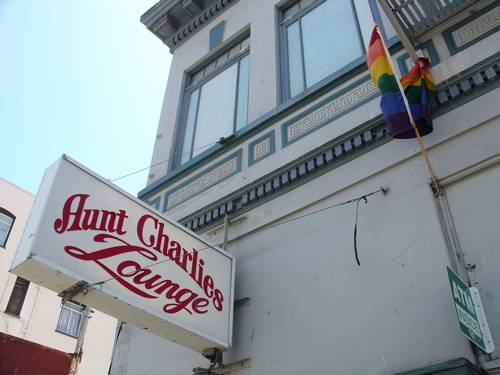 Aunt Charlie's is the last remaining gay bar in the Tenderloin, a neighborhood preceding the Castro as the city's gay mecca.

The Tenderloin was named after a term used for the vice area of New York City during the 19th century. There are numerous claims regarding the origin of the term, but the most popular hold that it either is a metaphor alluding to the 'soft underbelly' of the city, or a reference to an anecdote which held that corrupt police would often request that beat because an assignment there would guarantee an increase in income (due to bribes), allowing them to afford a "tenderloin" cut of beef instead of chuck steak.

In San Francisco, the Tenderloin gained a reputation as a lively entertainment area. In 1893, records show that a raid was made on a shop selling "dirty" oil paintings. The area was destroyed during the 1906 earthquake and fire, but was rebuilt during the following decade. The new construction included many majestic apartment houses with marble entryways and beveled glass, and women's boarding houses and hotels. The area soon thrived with a wealth of restaurants, the movie palaces on Market Street, and "discreet" bordellos.

After World War II, the advent of television destroyed much of the movie trade on Market, which had long been the cornerstone of the area's economy. As deterioration began, those residents who could afford to left the Tenderloin. Many displaced by redevelopment in other parts of the city moved into the area.

The Tenderloin became an entry point for new immigrants to the City and reflected this transient, anonymous character. It also served as a home for the elderly on fixed incomes who could not afford to live elsewhere.

During the 1970s a large number of Southeast Asian refugees settled in the Tenderloin. Today it is a mosaic of cultures and lifestyles, perhaps one of the most interesting neighborhoods in the City.

The following 95 pages are in this category, out of 95 total.