Rexroth on Night Clubs and Jazz

by Kenneth Rexroth, written February 5, 1961, reposted from the collected columns of Rexroth at the Bureau of Public Secrets

What makes the police so improbable? They do do the darndest things. Every columnist in town has spoken his piece on the Black Hawk imbroglio and it seems to be unanimous that the club was about as far from contributing to the delinquency of minors as could be imagined. In fact, it was engaged in an activity fully as commendable as any of the YMCA’s! 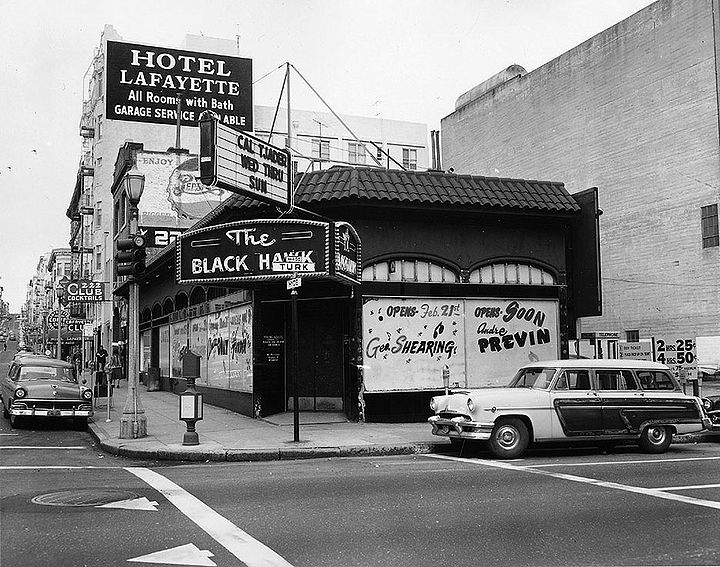 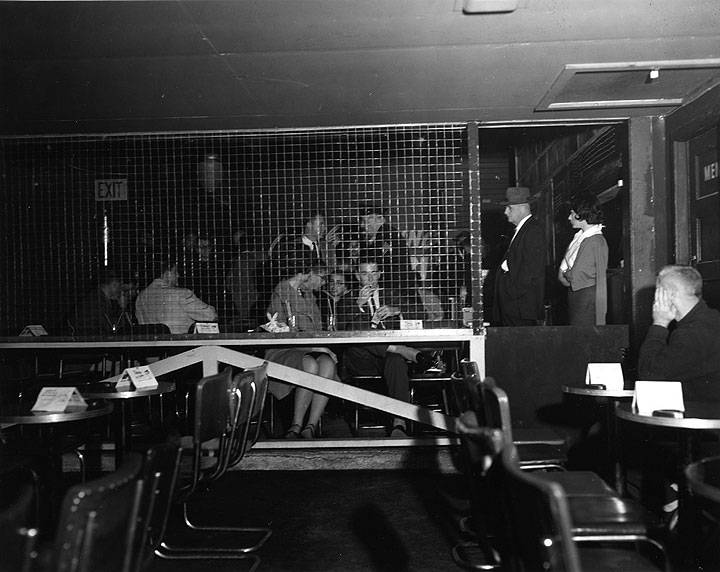 The infamous chicken wire barrier behind which underage patrons could enjoy the wild jazz, 1961.

Somehow, I suspect that this is all going to blow over. It may even result in opening up more jazz spots for teenagers. Any step in this direction is greatly to be desired.

What is wrong with jazz is the whole nightclub entertainment pattern. The customer sees slatternly waitresses, nude ones, or both, pushing drinks with 1-percent alcoholic content. He sees dirty joints, brutal and ignorant owners, noisy and foolish customers. But he doesn’t see behind the scenes. Unless you’ve been in the business, you can form no conception of the brutal, petty larceny, exploitation of customers, waitresses and musicians in the majority of the clubs around the country, and all but a tiny minority in New York City.

I must say that San Francisco is singularly free of this sort of thing. Even the toughest joints in town are wholesome compared with the New York average. As an entertainment city, San Francisco is both clean and, compared with New York, ridiculously cheap. Furthermore, it is the point of origin of the revolution in taste which is slowly spreading through all show business. The hungry i, the Black Hawk, a few other places, and the Crystal Palace in St. Louis, were first in the field with the new style — modern jazz, commentators who have something vital and biting to say about the contemporary scene, singers who sing songs that make sense to grownups, and who hit the right notes while so doing.

Pretty soon we’ll have strippers who recite Kafka and T.S. Eliot while undressing.

One aspect of the game the layman can never know, and would have difficulty understanding if it were explained to him, is the financial rat race of the entertainment business. Club owners, booking agents, managers, smart guys who buy a bit of a promising boy early and ride him like the Old Man of the Sea for years. You’ve read exposés of rackets in boxing and wrestling — it’s just the same with many musicians and entertainers.

What makes life unbearable for a Harlem musician is what unions call “working conditions” as well of course as living conditions in that little urban paradise. If I had to work in the average sleazy gangster-run club and live in Harlem, I wouldn’t take heroin, I’d take prussic acid.

My ideal night club is one which revives as far as can be the atmosphere of the old-fashioned cabaret, plenty of room, good food as well as drinks, waitresses who see that you get what you want and no more, relaxation rather than strained artificial perpetual New Year’s Eve gaiety, entertainers and management you would not be ashamed to know socially, good music and literate songs and gags.

This is what Variety calls “the freak gig, Frisco style.” So be it. Two hundred places like this in America would do more to stop narcotics addiction amongst musicians than all the efforts of the Treasury Department. As Charles Mingus says, “My idea of a good club is one where my family would come to listen to me play.” 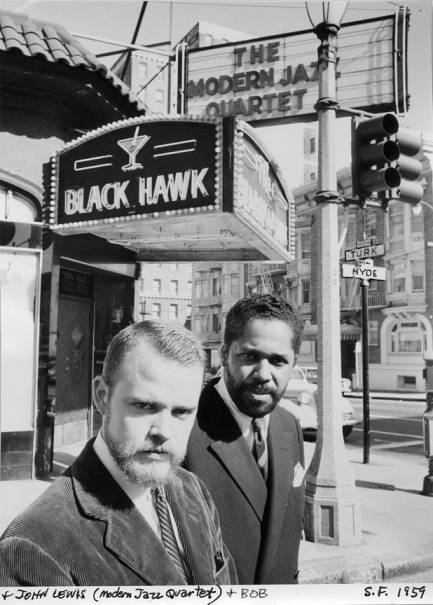 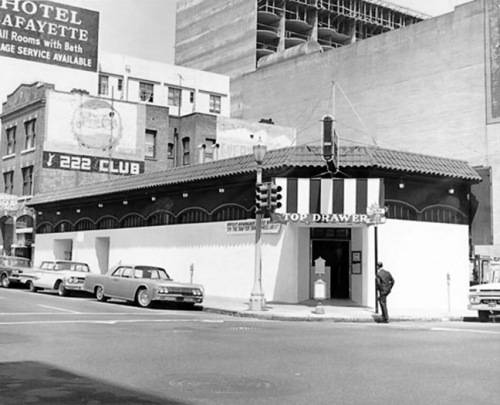 The Top Drawer, former site of the Blackhawk, 1964.

The other night I was in the Arenae and was amazed to discover that it just about fills this bill of particulars. I had often eaten in there because I liked the food and I am a hard man to please with vittles, but I had never stayed for the show. I don’t know just how they do it, but everybody projects an innocent, highly talented non-professionalism.

Maybe they all are beginners, anxious to please on their first real date. It is as though a lot of very clever and friendly customers were entertaining each other. Remember once I said that what I liked about the Stereo Club is that it was neighborly, a word nobody would ever think of applying to a jazz room? Well, the show at the Arenae gives off the same feeling — like if you lived in a real good neighborhood.

Even the best old pros in show business get that hard empty surface — they are all a bit like burlesque candy butchers and paddle wheel men at county fairs. People like this may be good material for short stories, but they are dull to know. Everybody at the Arenae is as friendly and accessible as a six-months pup. And besides, they sing and tell funny stories, which few six-months pups can do, and they’re pretty good at it, too.