Kenneth Rexroth and Barcelona by the Bay 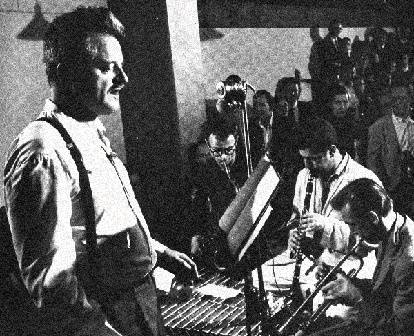 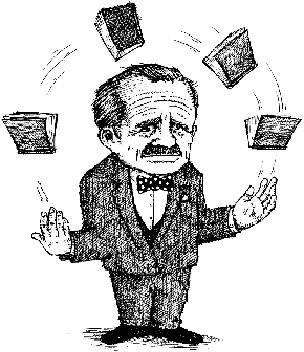 By the time 22-year-old Kenneth Rexroth arrived in San Francisco in 1927, he had already developed a career as a professional bohemian and radical. Orphaned at a young age, he'd been living happily among the seedier elements of Chicago's underground as a modernist painter, stage performer and poet, and using his natural born oratorical skills to soapbox for the Industrial Workers of the World (IWW).

Rexroth and his new wife, Andree, had arrived in San Francisco penniless and with no contacts whatsoever. The couple had just hitchhiked, backpacked and bummed their way west, expecting to find $500 waiting for them at the post office--money which had never arrived. As they scuffled down Market Street, broke and homeless, they happened to spot some furniture Andree had designed back in Chicago in a shop window. The shopkeeper offered them jobs, and the two decided to stay, thus beginning Kenneth Rexroth's long relationship with the city of San Francisco.

Kenneth and Andree found the city to be somewhat provincial. Kenneth liked to cite the fact that everyone he met in those early days considered the conservative, 19th century-style poet George Sterling to be the only poet worth mentioning. As far as literary radicalism went, Jack London was as wild as it got, which didn't impress those who had been experimenting with Dadaist theatre and reading the latest poetry from Paris. But the two had a great love of the outdoors, and the culture of San Francisco seemed perfect for a pair of literary rebels they felt right at home amid the loose morals and natural beauty of the Bay Area, and ended up permanent residents.

As Rexroth relates in his autobiography: "San Francisco was not just a wide-open town. It is the only city in the United States which was not settled overland by the westward-spreading puritan tradition, or by the Walter Scott fake-cavalier tradition of the South. It had been settled mostly, in spite of all the romances of the overland migration, by gamblers, prostitutes, rascals, and fortune seekers who came across the Isthmus and around the Horn. They had their faults, but they were not influenced by Cotton Mather."

Rexroth immediately set about involving himself in the intellectual and political affairs of the city, introducing himself to anyone with any literary or political interests. Soon he had insinuated himself into the cultural life of the Bay Area, giving readings, starting magazines, writing articles, hosting (with Andree's assistance) soirees at his home, and generally engaging himself with every political battle that caught his eye, from organizing maritime unions to being a conscientious objector during World War II to open support for the Japanese during their internment in concentration camps.

Rexroth was one of the few Americans to speak out against the internments. At great personal risk, he held meetings, organized committees, hid people, and concocted scams whereby Japanese-Americans were smuggled to the Midwest as part of a "correspondence course." It was Rexroth's efforts that rescued Japanese-Americans libraries, which he arranged to be absorbed by the State Library system and thus available to be checked out by internees.

In Rexroth's circle the Postwar Era was not as dull or cautious as the popular notion of the '40s and '50s might suggest. While films and television reflected a period of conservatism, withdrawal and reaction following World War II, there was simultaneously a new wave a dissidence developing all over the country. Rexroth's home at 250 Scott Street, above Jack's Record Cellar, became a magnet for this rapidly spreading mood of disaffection from American society, as all sorts of poets, artists, radicals, and notably conscientious objectors began to find each other and develop a common language and lifestyle in the Bay Area. 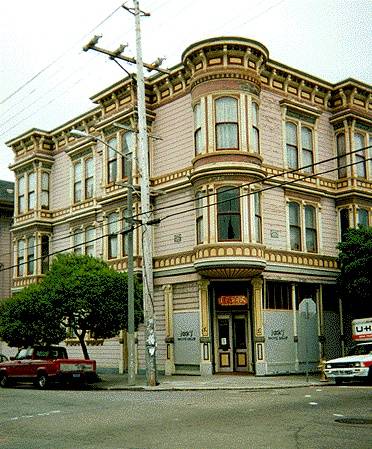 250 Scott Street in the 1990s. Rexroth lived here and held meetings of the "soirees" with poets, artists, radicals and WWII conscientious objectors. Jack's Record Cellar occupied the ground floor in the years after WWII. 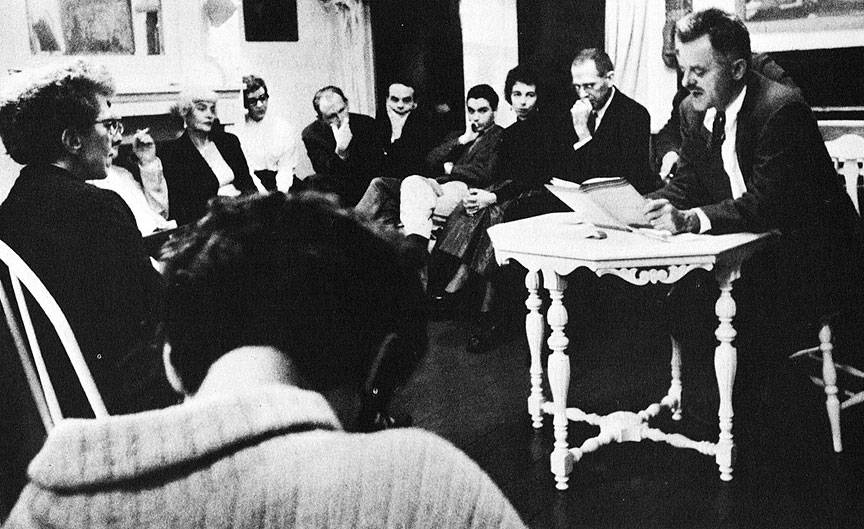 The meetings in Rexroth's home gave rise to the Libertarian Circle, which met weekly in larger venues around town to discuss radical theory and history in an attempt to redefine and rejuvenate the radical movement after the defeats of the previous half century. Subjects included:

"...the Andalusian Agricultural Communes, the Shop Stewards' Movement in revolutionary Germany, communalist groups in the United States, the Kronstadt revolt, Nestor Makhno and his Anarchist society and army in the Russian Civil War, the I.W.W., Mutualist Anarchism in America, and individuals: Babeuf, Bakunin, Kropotkin, Alexander Berkman, Emma Goldman, Voltairine de Cleyre and the Anarchist Woman's Movement ... There was no aspect of Anarchist history or theory that was not presented by a qualified person and then thrown open to spontaneous discussion ... Our objective was to refound the radical movement after its destruction by the Bolsheviks and to rethink all the basic principles, i.e., in other words to subject to searching criticism all the ideologists from Marx to Malatesta."

Eventually, Rexroth came to be regarded as something of a San Francisco institution. Out of the community that gathered around him developed several magazines, a left-wing community radio station (KPFA, the first listener-sponsored station in the U.S.), and, of course, the San Francisco Renaissance. By the 1950s the loose-knit crowd of anti-authoritarian intellectuals Rexroth had done so much to bring together began to gel into a genuine movement, embodying most of the themes Rexroth had been writing about for the past three decades: Contempt for the academic and political establishment, intimate familiarity with Eastern (particularly Buddhist) philosophy and literature, and celebration of urban life combined with a profound appreciation for nature and the outdoors. Writers who were associated with the San Francisco Renaissance (also known affectionately as the "bear-shit-on-the-trail" school of poetry) included Phillip Whalen, Phillip Lamantia, Michael McClure and Gary Snyder.

Today, Rexroth is usually mentioned as a precursor or "father-figure" to the Beat Generation, or, in a phrase the aging anarchist despised, "elder-statesman" of the Beats. Rexroth did have an impact on the writers such as Gary Snyder and Allen Ginsberg--notably influencing Ginsberg to abandon the formality and metered lines of his early work--but Rexroth was actually quite ambivalent about the Beat writers. He praised their anti-establishment approach and commitment to direct, un-mediated communication, but distanced himself from their more conservative elements. In particular, he held Jack Kerouac in disdain, considering him a not very charming drunken reactionary.

"... I will not take those would-be allies which Madison Avenue has carefully manufactured and is now trying to foist on me. If the only significant revolt against what the French call the hallucination publicitaire is heroin and Zen Buddhism, nobody will ever be able to escape from the lot of this tenth-rate Russian movie called 'The Collapse of Capitalist Civilization' onto which somehow we all seem to have stumbled."

Nevertheless, the connection remains, either because Rexroth prefigured the Beats, or because the Beats modeled themselves after him and others like him. Certainly, Ginsberg's great poem "Howl" wouldn't have been possible without advice like that he received from Rexroth. And of course, Rexroth's poem "Thou Shalt Not Kill," often read to jazz in a club called The Cellar, is a direct forerunner to "Howl." Composed in one sitting after Rexroth heard the news of Dylan Thomas' death, the poem is a powerful denunciation of the materialistic, technocratic society that devours creativity and is "killing all the young men."

How many stopped writing at thirty?

How many went to work for Time?

How many died of prefrontal

Lobotomies in the Communist Party?

How many are lost in the back wards

How many on the advice of

A business career was best after all?

How many are hopeless alcoholics?

The fact that so many of the themes of the larger-scale rebellion of the 1960s were embraced by Rexroth as early as the 1920s makes it surprising that his name does not come up more. From his early interest in ecology and defense of the local environment, to his (secular) Buddhism, to his commitment to radical, direct action, Rexroth was far ahead of his time. (It can also be argued that, as Ken Knabb wrote in his excellent short critique, "The Relevance of Rexroth," that Rexroth did not cope well with the wider interest in his previously obscure pursuits. He failed to effectively articulate a libertarian alternative as statist-revolutionary dogma took hold in the '60s, and withdrew into an avant-gardist view of individual revolt at precisely the moment that collective action held the most promise.)

If San Francisco is no longer the provincial backwoods it once was; if it is now, as Rexroth liked to say, "to the arts what Barcelona was to Spanish Anarchism," then in large part we have Rexroth to thank.

Kenneth Rexroth on "Bohemian San Francisco Between the Wars"