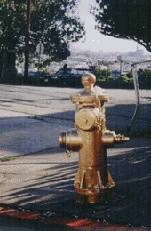 20th and Church Streets. A great place to visit, if only because it's right across the street from the stunningly scenic southwest corner of Dolores Park. After you pay your respects to the golden hydrant, why not stretch out on the grass and unleash a geyser of champagne in its honor?

The golden fire hydrant at 20th and Church Streets isn't really gold-- it's only painted gold. Why a golden fire hydrant, wonder passersby and their dogs. Is it used by kinky Castro residents who break it open to let loose a thunderous "golden shower" on hot days? Wrong. Every year, earthquake survivor Les Bulloch puts a coat of gold paint on the hydrant -- the only one that still functioned after the 1906 quake. This very special hydrant was responsible for saving the houses between 20th and 22nd Streets from the Great Fire.

300 men of the neighborhood vowed to "save the Mish' and ten times pushed a pump wagon up the hill from in front of Mission Dolores down Dolores Street, then right up 20th Street to the Church Street corner, where the only working fire hydrant was, filled the tanks on the wagon, then rolled the wagon, using the brakes, down 20th to Dolores, then left down to the Mission.

My grandfather, Walter B. Smith, his three brothers & their father Dr. Thomas Orde Lees Smith, fought the fire until 4 am the 21st of April, according to his diary which I have. Dr. Thomas was leader of "Mission Camp," at Dolores Park for 2 months. 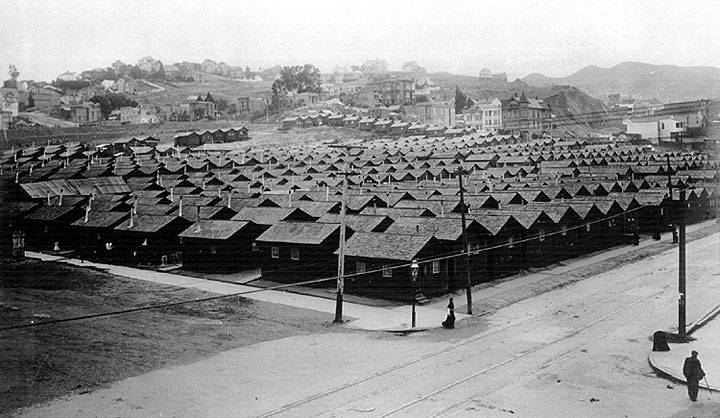