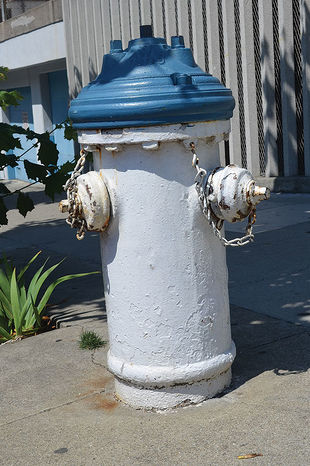 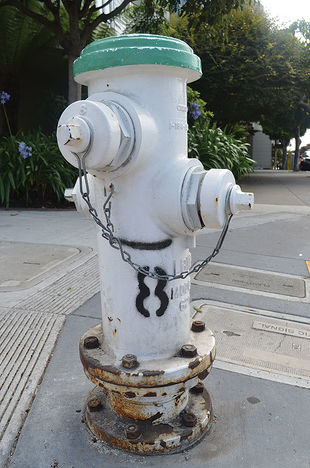 Let’s start with the outlier, the gold-lacquered fire hydrant on 20th Street between Dolores and Church. This relic gets a new coat of paint each April 18 in honor of its role in saving a good piece of the Mission District at the time of the 1906 conflagration that destroyed 25,000 buildings or 80 percent of the city’s property value. The Little Hydrant That Could managed to function at a time other hydrants were producing not so much as a trickle. Some 300 breaks in the city’s water mains had turned the city’s water distribution system into a sieve.

When it was discovered that that the 20th Street hydrant was still functioning—probably because it was drawing its water from an underground spring rather than the city’s water supply—300 residents took on the task of propelling fire engines up 20th Street, a task beyond the endurance of the horses that would normally have performed this job. Many homes north of 20th Street are still with us due to this effort. 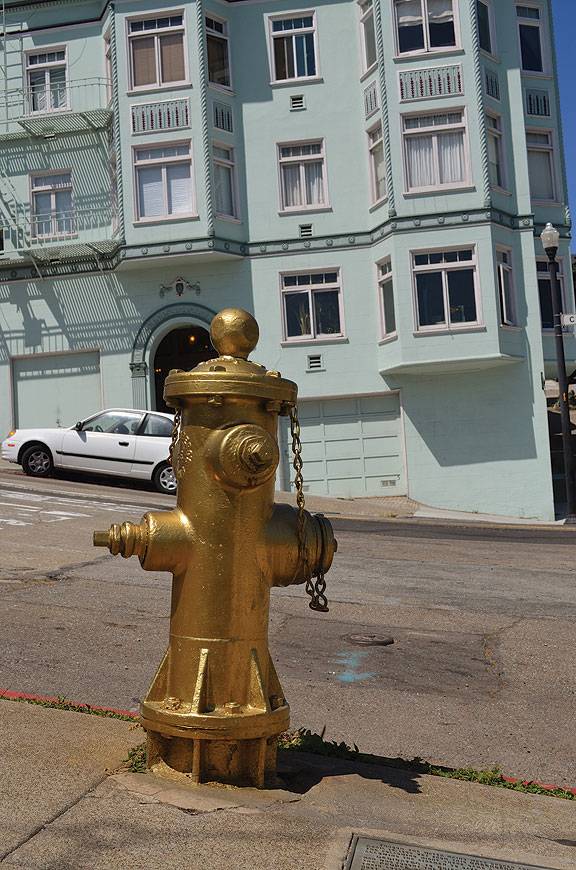 Gold hydrant at 20th and Church.

But the 1906 fire served as a wake-up call for a city that since 1849 had burned to the ground six times. In 1908, City Engineer Marsden Mason vowed to put an end to these infernos. Collecting data from 250 cities throughout the world, he developed the water-abundant system we have today. To the San Francisco pedestrian, the system is most visible by observing what one writer called the “Laurel and Hardy” fire hydrants that dot our Streets. The skinny white “Stan Laurel” low-pressure hydrants draw on the city’s potable water network. Some of these have been around a very long time as indicated by the ball on top of many of them, meant as tethering points for horses. But Mason wanted to make sure there was much more. He oversaw the construction of three reservoirs and tanks, all at heights where the gravitational pull would release flow of water to the lowlands. The thick “Oliver Hardy,” high-pressure hydrants draw from these storage places. Their colored tops reveal the source of the water: blue, a tank on Jones Street; red, one on Ashbury, and black, the reservoir at Twin Peaks.

Mason still was taking no chances. He constructed 175 underground cisterns, mostly at the center of intersections. These storage sites can provide water for the green-headed hydrants nearby. Further, there are two pump stations located near the bay capable of delivering saltwater to quell out of control flames. Finally, the city’s two fireboats are at the ready to pump bay water into the auxiliary water system.

One observer at the time of the 1906 catastrophe wrote, “The earth shook, the sky burned.” Given San Francisco’s geology, it is highly possible that the earth will shake again, but will the sky burn? That’s less likely given the diligence of Marsden Mason and his colleagues following the worst fire ever experienced by an American city. 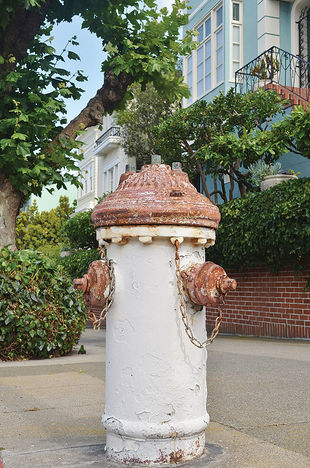 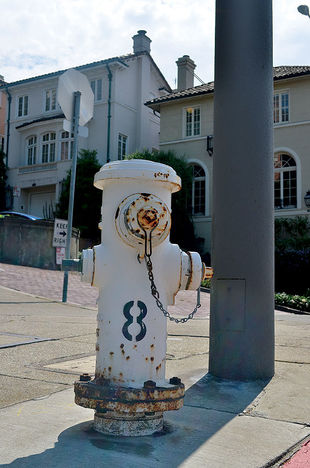 Excerpted with permission from Art Peterson's book, "Why Is That Bridge Orange?" published in 2013, by Inquiring Minds Productions.
Retrieved from "http://foundsf.org/index.php?title=Why_Are_San_Francisco_Fire_Hydrants_Different_Colors%3F&oldid=33645"
Share this page: