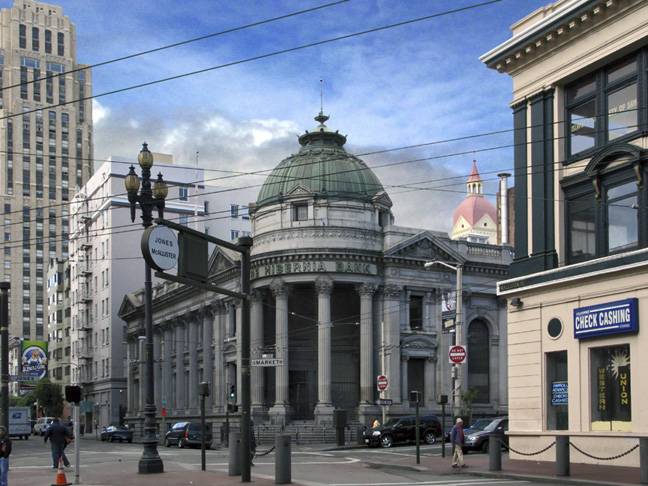 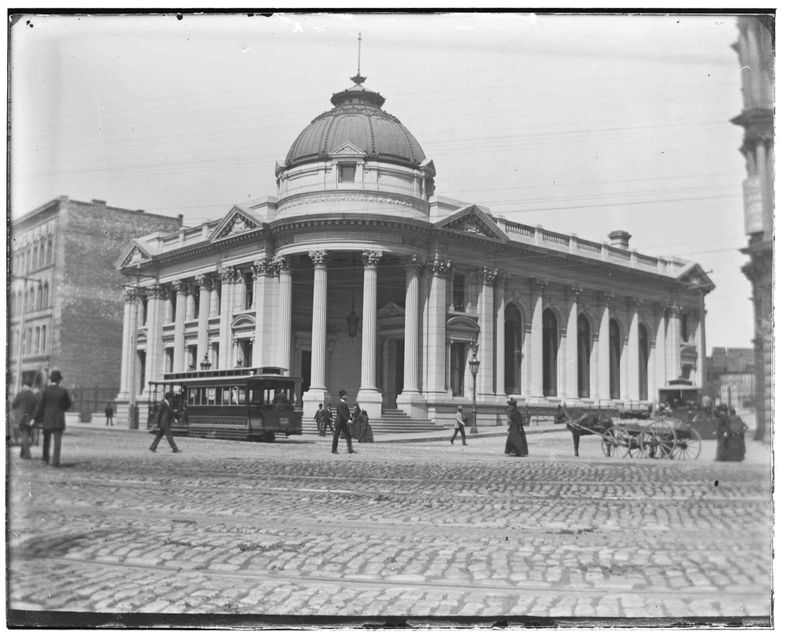 The Hibernia Bank was first organized in April 1859, in a little office at the corner of Jackson and Montgomery. Among the first depositors were Irish miners who had struck pay dirt in the California goldfields to the north. The Hibernia Bank accepted the miners' unminted gold and earned a reputation among them for courteous and efficient transactions, and eventually became known as "the people’s bank." Business increased apace and before long the bank moved to more spacious quarters at Montgomery and Post, but the institution’s extraordinary growth over the next two decades eventually demanded another change.

It was a fateful day when the Hibernia’s directors hired a relatively unknown architect named Albert Pissis to design a new building at the corner of McAllister and Jones. Completed in 1892, the Hibernia Bank Building captured the hearts of San Franciscans and ensured the fame of Albert Pissis, whose work would change the face of San Francisco in the late nineteenth and early twentieth centuries. Architect and Engineer reflected in 1909 that

. . . the (Hibernia Bank) became famous at once and marked an epoch in San Francisco architecture and placed its designer in the forefront of his profession, where he has remained ever since.

Indeed, so famous was the building that San Franciscans called it "The Paragon." The Hibernia Bank was one of the few buildings in the central city to survive the 1906 cataclysm, although it was damaged by the fire. As one of the City’s most popular and vital institutions, it was also one of the very first buildings to be restored. 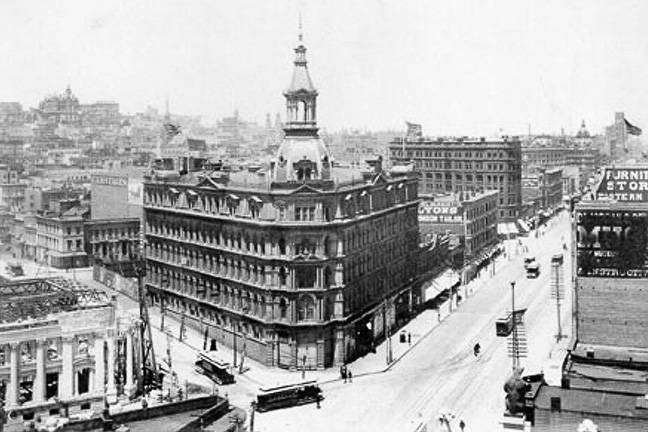 Market and Jones, 1891. Dominating the photograph is the Murphy Building, home of Prager’s Dry Goods; on the left is the Hibernia Bank Building, still under construction. 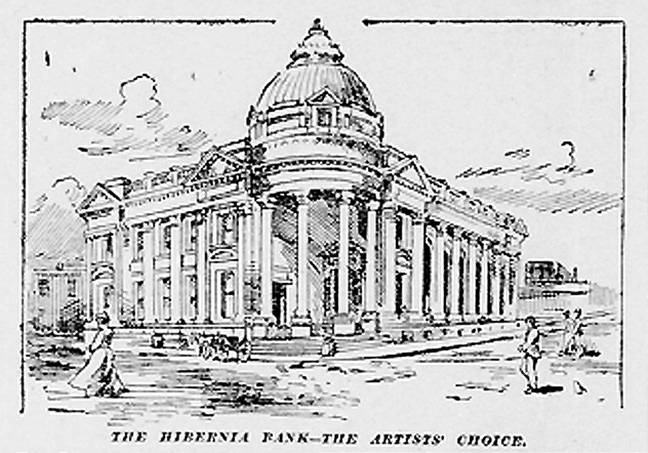 Illustration, San Francisco Call, 15 September 1892. Shortly after the new bank building was completed, the San Francisco Call asked twenty San Francisco artists, "From an artistic point which building do you think the best?" Fourteen of the artists named the Hibernia Bank Building; the Mills Building came in a distant second with four votes, followed by the Crocker and Mutual Life Buildings with one vote apiece. The results of the poll were published in an article that declared the Hibernia Bank was "The Most Artistic Building in Town." 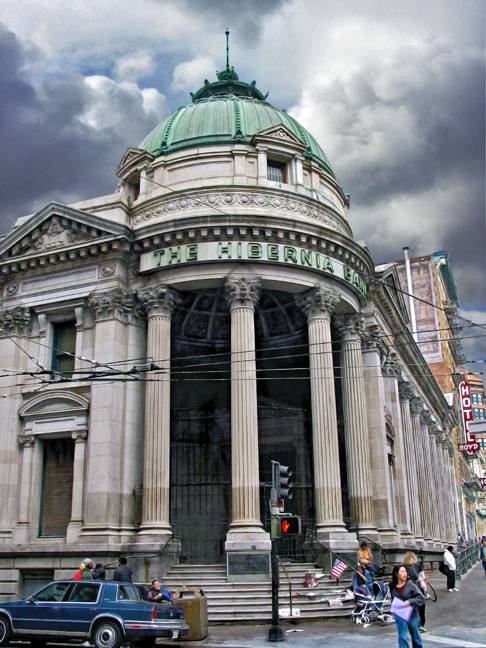 After it was vacated by the Hibernia Savings and Loan Company, the building served as headquarters for the San Francisco Police Department Tenderloin Task Force until the new Tenderloin Station was finally completed in 2000. An out-of-town speculator then bought the building and left it empty and unmaintained. This prominent landmark, which should be a proud San Francisco showpiece, has for years been a focal point of neighborhood blight. 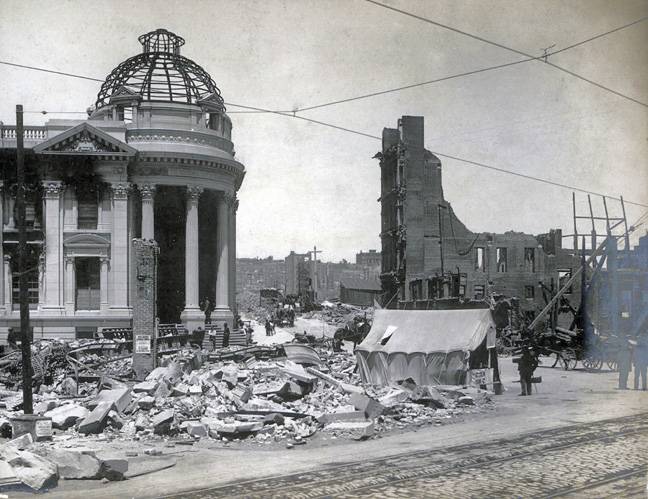 Fire-damaged Hibernia Bank, 1906. The pile of rubble in the foreground is all that remained of the Callaghan Building; on the right are the ruins of the Murphy Building. 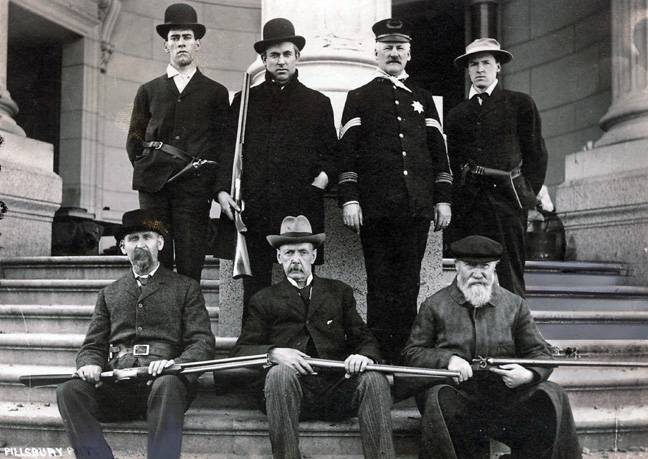 Officers and employees of the Hibernia Bank, 1906. Clearly none with whom to trifle, these gentlemen protected the Hibernia's compromised bank vaults during the height of the fire. 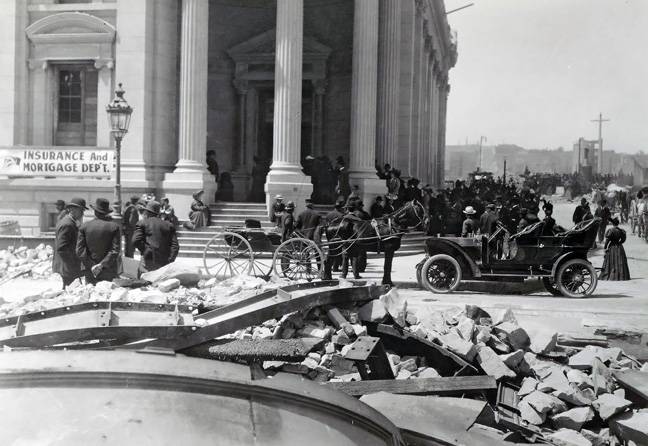 Opening Day, 25 May 1906. Just five weeks after the fire, while the building’s restoration was still in progress and before much of the City’s reconstruction had even begun, the Hibernia reopened to five-block-long lines of depositors in desperate need of funds. 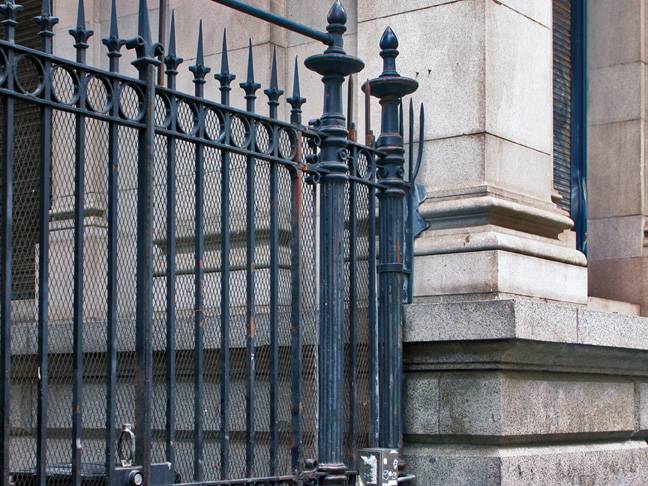 The Hibernia Bank Building holds an unparalleled place in San Francisco history. It is truly an architectural treasure, but one that has been sadly forgotten, and thus the building’s exterior has suffered greatly from years of neglect and abuse. Near the end of 2008, the building was purchased for $3.9 million by Seamus Naughten, who also owns the old KGO-TV building on Golden Gate Avenue. More than two years later, the building continues to rot and its future remains uncertain. 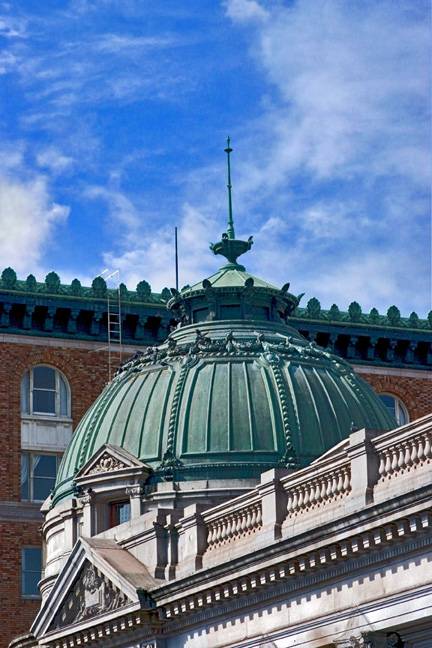