Do You Ever Want to Steal Everything? 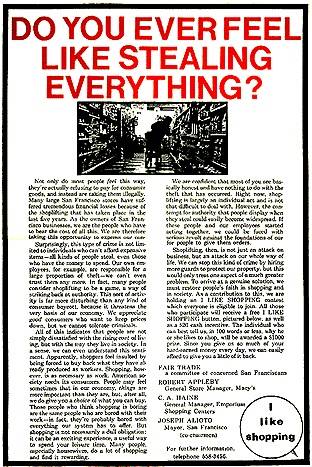 Not only do most people feel this way, they're actually refusing to pay for consumer goods, and instead are taking them illegally. Many large San Francisco stores have suffered tremendous financial losses because of the shoplifting that has taken place in the last five years. As the owners of San Francisco businesses, we are the people who have to bear the cost of all this. We are therefore taking this opportunity to express our concern and bring this problem out into the open. Moreover, we feel that this seemingly petty crime has important consequences for society as a whole. Surprisingly, this type of crime is not limited to individuals who can't afford expensive items--all kinds of people steal, even those who have the money to spend. Our own employees, for example, are responsible for a large proportion of theft--we can't even trust them any more. In fact, many people consider shoplifting to be a game, a way of striking back at authority. This sort of activity is far more disturbing than any kind of consumer boycott, because it threatens the very basis of our economy. We appreciate good consumers who want to keep prices down, but we cannot tolerate criminals.

All of this indicates that people are not simply dissatisfied with the rising cost of living, but with the way they live in society. In a sense, we can even understand this sentiment. Apparently, shoppers feel insulted by being forced to buy back what they have already produced as workers. Shopping, however, is as necessary as work. American society needs its consumers. People may feel sometimes that in our economy, things are more important than they are, but, after all, we do give you a choice of what you can buy. Those people who think shopping is boring are the same people who are bored with their work--in fact, they're probably bored with everything our system has to offer. But shopping is not necessarily a dull obligation; it can be an exciting experience, a useful way to spend your leisure time. Many people, especially housewives, do a lot of shopping and find it rewarding.

We are confident that most of you are basically honest and have nothing to do with the theft that has occurred. Right now, shoplifting is largely an individual act and is not that difficult to deal with. However, the contempt for authority that people display when they steal could easily become widespread. If these people and our employees started acting together, we could be faced with serious revolt against the foundations of our society--work and shopping. The kind of people who don't pay are capable of anything, including the notion that they could run society by themselves without any need for people to give them orders.

Shoplifting, then, is not just an attack on business, but an attack on our whole way of life. We can stop this kind of crime by hiring more guards to protect our property but this would only treat one aspect of a much greater problem. To arrive at a genuine solution, we must restore people's faith in shopping and in society. As a contribution to this, we are holding an I LIKE SHOPPING contest which everyone is eligible to join. All those who participate will receive a free I LIKE SHOPPING button, pictured below, as well as a $20 cash incentive. The individual who can best tell us, in 100 words or less, why he or she likes to shop, will be awarded a $1000 prize. Since you give us so much of your hard-earned money every day, we can easily afford to give you a little of it back.