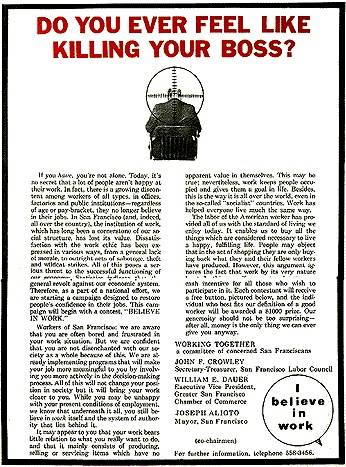 If you have, you're not alone. Today, it's no secret that a lot of people aren't happy at their work. In fact, there is a growing discontent among workers of all types, in offices, factories and public institutions-- regardless of age or pay-bracket, they no longer believe in their jobs. In San Francisco (and, indeed, all over the country), the institution of work, which has long been a cornerstone of our social structure, has lost its value. Dissatisfaction with the work ethic has been expressed in various ways, from a general lack of morale, to outright acts of sabotage, theft and wildcat strikes. All of this poses a serious threat to the successful functioning of our economy. Statistics indicate that the productivity level of the American worker is one of the lowest in the world.

As proprietors of San Francisco businesses, leaders of organized labor, and government officials, we are intimately concerned with this state of affairs. Since we are partners in the economy who have a mutual interest in the continued operation of our society, we feel that an immediate solution to this problem must be found. At present, these acts occur on an individual or local level, but they could easily develop into a general revolt against our economic system. Therefore, as a part of a national effort, we are starting a campaign designed to restore people's confidence in their jobs. This campaign will begin with a contest, "BELIEVE IN WORK."

Workers of San Francisco: we are aware that you are often bored and frustrated in your work situation. But we are confident that you are not disenchanted with our society as a whole because of this. We are already implementing programs that will make your job more meaningful to you by involving you more actively in the decision-making process. All of this will not change your position in society but it will bring your work closer to you. While you may be unhappy with your present conditions of employment, we know that underneath it all, you still believe in work itself and the system of authority that lies behind it.

It may appear to you that your work bears little relation to what you really want to do, and that it mainly consists of producing, selling or servicing items which have no apparent value in themselves. This may be true; nevertheless, work keeps people occupied and gives them a goal in life. Besides, this is the way it is all over the world, even in the so-called "socialist" countries. Work has helped everyone live much the same way.

The labor of the American worker has provided all of us with the standard of living we enjoy today. It enables us to buy all the things which are considered necessary to live a happy, fulfilling life. People may object that in the act of shopping they are only buying back what they and their fellow workers have produced. However, this argument ignores the fact that work by its very nature has to be this way; if we want society to continue, we must all be prepared to make certain sacrifices and a job is one of them.

Work may be unpleasant, then, but it is absolutely essential. If people wanted to get rid of it, they would have to change everything and create a completely different kind of world. But let's be realistic--nobody has to go that far. We are convinced that the average American worker respects his superiors and is basically satisfied with his life. As a way of showing our appreciation, our BELIEVE IN WORK contest will include a $20 cash incentive for all those who wish to participate in it. Each contestant will receive a free button, pictured below, and the individual who best fits our definition of a good worker will be awarded a $1000 prize. Our generosity should not be too surprising--after all, money is the only thing we can ever give you anyway.

WORKING TOGETHER a committee of concerned San Franciscans