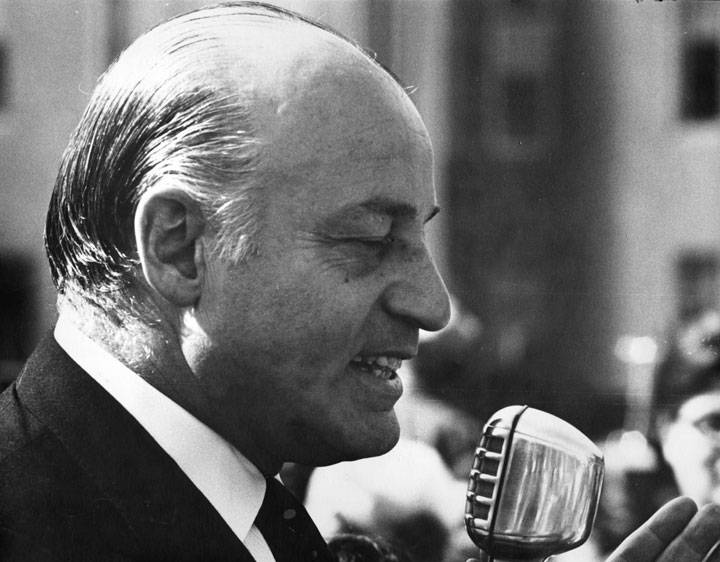 January 8, 1968—January 7, 1976 former head of SF Redevelopment Agency, strong supporter of downtown expansion, and Justin Herman (Redevelopment Czar). Alioto was the least abashed practitioner of nepotism ever to be elected. He appointed his wife to the War Memorial Trustees, his wife's nephew to a staff job at the Mayor's office, his brother-in-law as Port Director, his cousin to the Fire Commission and later to the Civil Service Commission, his sister to the Landmarks Preservation Advisory Board and two cousins and a real estate partner to the five-person nonprofit corporation that at one point was intended to build a sports arena in Yerba Buena Center. He also based his power on relationships cultivated with specific labor leaders and Democratic Party community stalwarts, including members of the International Longshoreman's Union (ILWU) and the Laborer's Union Local 261, each of whom were rewarded with appointments and city work. ILWU representative Wilbur Hamilton went on to manage the Western Addition A-2 Redevelopment Project, the one that laid waste to the heart of the old Fillmore area.

Calvin Welch: "Very early in Joe Alioto's administration, every god-fearing hippie hated Joe Alioto. Joe Alioto represented everything that was wrong and rotten in American society. He was old, he was fat, he was rich, he was American, and probably he was the mafia, and he didn't get you a good price on mescaline. So he was totally bad. Joe's daughter Angela has but a small hint of her father's panache. Joe Alioto could quote you Dante in Italian, classical poetry in Greek, he could sing arias from great operas. He was in my humble opinion the most extraordinary flat-footed orator I have ever seen at work. The man was unbelievable. He lied like a rug, totally unethical, not to be trusted as far as you could throw him, but absolutely brilliant, and a man who knew politics, of the old school, the last elected official in my opinion who knew who his base was and delivered consistently to his base. Joe Alioto brought people of color into the government of the city and county of SF and they were not just any people of color, and they were certainly not liberal people of color, they were trade unionists, and that was Joe Alioto's base, that's who got him elected, and that's who he ran this town to benefit. And for those of us on the left, we had to deal with how can a working class mayor be such a pig!? Maybe there was something about the working class he represents or the organizations of those unions that he represents.

His problem was he had an ego greater than the universe. Talk about blind ambition! Joe Alioto missed by that much being a vice presidential candidate in 1968. He spent the next four years of his political life in this town basically positioning himself to run for governor. Had he not been hit hard and consistently with supposed mafia connections, it's an open question in my mind as to whether or not Joe Alioto would have been governor of the state of California. An extraordinary rhetorician, an extraordinary personality, the last true mayor of San Francisco, the last true mayor who ran this town.

Unfortunately, he ran it into the ground. He was a man of no vision except his own, a man who cared for no one but the people who had loyalty to him. I'll never forget the last speech I heard of Alioto before the Board of Supervisors. A number of members of the Alioto administration were found to have been illegally appointed or illegally registered in San Francisco because they were not residents of SF. His political enemies, especially on the right -- John Barbagelata on the Board of Supervisors and his ruling henchmen Quentin Kopp and their able henchwoman Dianne Feinstein (this is a period Dianne doesn't like to talk about, when she was very close to Kopp and Barbagelata), held a series of hearings on this tragedy, this outrage, on fraudulent registered voters, of the commissioners who didn't even live in San Francisco. They were making a report to the full Board of Supervisors, and I was there on another issue, and Joe Alioto walked in, I believe the last week he was mayor, walked in to the Board of Supervisors and stood at the public lectern, and demanded to speak and be recognized. The rules of the Board of Supervisors is that they must give unanimous consent. I'd been sitting there before he walked in and I heard these people calling this man every scumbag, loathsome thing you can imagine in polite society. It looked like a lion tamer with the lions shrinking back on their chairs:

Well, OF COURSE, unanimous consent, Joe could address 'em. He gave a 15-minute speech on the concept of the universal man and the commuting San Franciscan. What kind of small, mean-minded people would deny the talents of the world to be volunteered for public service in San Francisco over the mere technicality of not being a registered voter. 'If the Charter says that, and he doubted that the Charter said that -- the Charter clearly says that -- the Charter should be changed!' That he, the son of immigrants, and his administration made up of the sons of immigrants, made this city what it was today, and they applauded him wildly, John Barbagelata said 'thank you very much, this was very entertaining,' turned around and walked out. The man was an extraordinary politician, the problem was he was a man of no vision and great greed."

--Calvin Welch, from a talk given at New College of California, Fall 1994