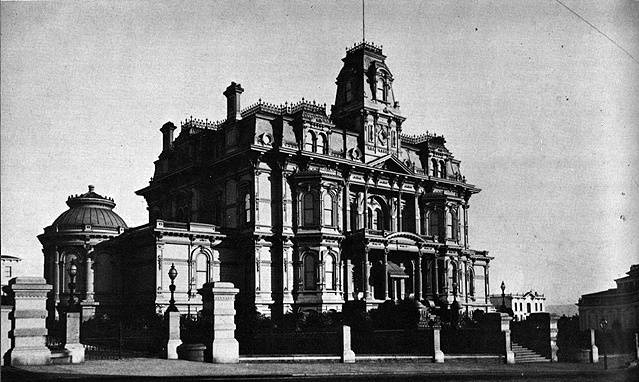 Nob Hill was originally considered too steep to be a prime location. However, in 1873, the completion of a cable car line made the hill accessible and for the next thirty years the district became a showcase for the wealthy,

This area attracted the upper strata of wealth: Richard Tobin, founder of the Hibernia Bank, built his home at the site of Huntington Park; Leland Stanford built his gothic, wooden mansion at Powell and California; Mark Hopkins lived at Mason and Cole; and others such as Charles Crocker, David Colton, and James Flood all built grand houses during the period from 1877-1886. In later years many of the mansions were converted to serve public functions, such as the Stanford University San Francisco campus and the Hopkins Art Institute.

The Fairmount Hotel, named for James Fair, a Comstock Lode millionaire, was ready to open in 1906. The earthquake and fire of that year destroyed part of the building and most of the mansions on Nob Hill. The Flood Mansion was built of brownstone and was saved. Today it is the site of the Pacific Union Club. The Huntington estate became Huntington Park.

The following 19 pages are in this category, out of 19 total.