INSIDE THE INTERNATIONAL INDUSTRIALIST CONFERENCE, 1969 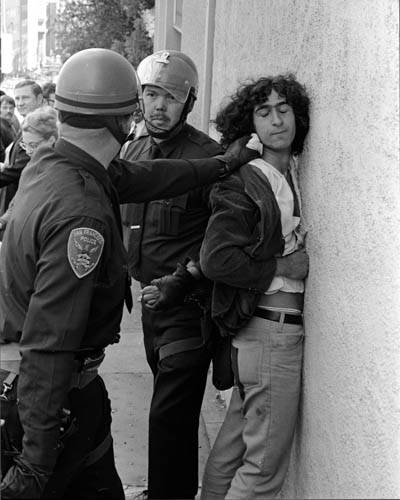 Marc Norton, a student at UC Santa Cruz, is pushed against the wall by two Tac Squad police during the demonstration opposing the presence of the International Industrial Conference in San Francisco.

The international capitalist clan met last week at the fourth quadrennial International Industrial Conference in San Francisco. More than 700 of the biggest corporations' biggest men gathered ostensibly to discuss how best to expand their enterprises and consolidate their power.

As they met, Americans howled in the streets and riot-ready platoons of the San Francisco Tac Squad marched briskly through the elegant corridors of the Fairmont Hotel. Conference chairman David Rockefeller, America's top capitalist, even warned in his keynote address that "we could be forced to live in armed camps." But his warning was less about world revolution than protectionist infighting among advanced capitalist countries.

Blamed for inflation, the Vietnam war stalked the conference -- the cost of empire -- but it was not much talked about. Of greater interest to participants was the creation of an international managerial class, the problems of economic nationalism, the disaffection of the young, and the propagation of the socially conscious rhetoric of the new imperialism.

"Are you so sure you haven't got a son over there?" one American corporation president asked another as they watched young men waving red flags across the street from the Fairmont. "I'm not." Rockefeller was careful throughout the conference to refer to the demonstrators as "young people," not kooks or communists.

Attendance at the IIC was by invitation only. Its policy board is composed of the presidents and chairmen of the nation's greatest international corporations: Kaiser, Union Carbide, Standard Oil, IBM, Bank of America. 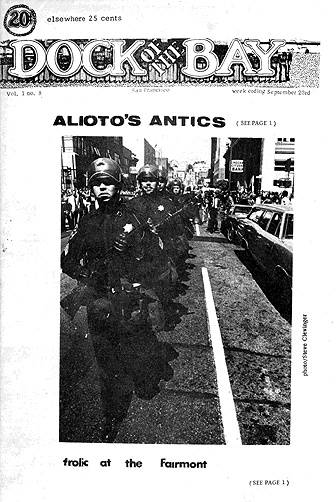 Dock of the Bay cover 9-23-1969: Alioto's Antics and the Fairmont conference.
Two-thirds of the participants were from the wealthy capitalist countries, half of those from the United States. The foreign giants were there in force: Royal Dutch Petroleum, Philips, Unilever, Siemens, FIAT, Mitsui, Mitsubishi. Most of the Third World capitalists invited were imperialism's subordinates in one form or another.

One striking thing about the capitalists was their sameness: The San Francisco Chronicle said that their suits might all have come "from the same elegant tailor." All spoke English, and spoke it with the same business-behavioralist jargon of "cost structures" and "profit centers" and "the management of change." There was a universal belief that all systems have to be managed, and that the chief industrialists were the ones best suited to do so. The world's problems were technical, not political.

Opening the conference, past chairman of U.S. Steel and director of the newly founded "Institute for the Future," Roger Blough chided his friends for "our inadequacies" in past decisions and blamed them for some of the major dilemmas of the day" -- inflation, pollution, "obsolescence in political institutions," the old, and the hungry. In this he agreed with SDS [Students for a Democratic Society], then lining up in Union Square to march on the conference, but his solution was radically different -- not "power to the people" but joint corporate planning "with the cooperation of government, the universities, the foundations."

The internationalists, in effect, were pushing the newest formulation of their global strategy. "The North American manager has become an internationalist and strives to convert his organization into a multinational corporation," Wells Fargo chairman Ernest Arbuckle told the conferees. He thinks of the world as one market.

Occasionally the more sincere, or the more naive, saw the contradiction between the rhetoric and the reality. "We are measured by the marketplace, earnings, profitable growth," Koppers Company president Fletcher Byrom told a panel on the role of the chief executive. "The history of our civilization is the accumulation and concentration of wealth and then its redistribution by violent or nonviolent means. Our problem is how to redistribute it by nonviolent means. Unfortunately that is in contradiction with the measurement of the marketplace."

But no matter. The men who heard Wells Fargo's Ernie Arbuckle say that "the separation of private business and public affairs... is no longer tenable," who wined and dined in the Grand Ballroom of the Fairmont while the Tac Squad cleared away the rabble demonstrating outside, were by and large satisfied that if they were not in complete control of events they could and should be. When Rockefeller told them that the choice was "ours to make," the international capitalist clan -- all 700 of them -- believed him.

As much as anything else, it was this concern with the young which seemed the reason for the rhetoric of social concern that the liberal internationalists tried to infuse into the conference. "I do not think that the profit motive is any more the prime or sole objective of our enterprise," Gerd Tacke, chairman of Germany's Siemens and master of 268,000 employees, told one panel. "If we want to attract the younger generation, we have to give them some more motivations."

Tacke was forced to retract that and to admit that "profit and the best growth rate" must be first in the mind of the chief executive. And some of the industrialists went so far as to call the liberal rhetoric leftist. "Should it really be our objective to close the income gap?" William Blackie of Caterpillar Tractor asked. "To me the term has the undertone of a rather odious Marxist implication."

But by and large the talk was of "democratizing" management hierarchies, of "managing change" in such a way as to bring "human dignity to each job" ("This is what the student unrest is all about"), of "industrial democracy" by which the worker is "given the sense" of having helped make decisions while management in fact maintains its authority. Such talk can be expected to dominate "progressive" capitalism at least until the next IIC conference four years from now.

—By members of the Pacific Studies Center