A RADICAL, WORKING CLASS US SENATOR??? 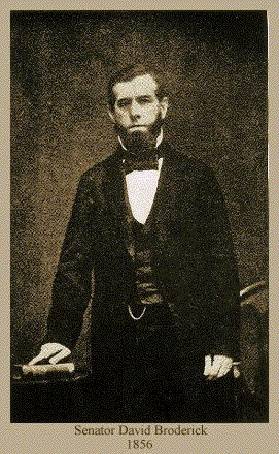 Born in 1820, David C. Broderick arrived in San Francisco from New York in June of 1849. Back in New York he had been a stonecutter, volunteer fireman and barkeeper but he had much higher ambitions and left for the new territory of California to seek better opportunities. His rise in California politics was meteoric: from foreman of a volunteer fire company in December of 1849 to California State Senator in January 1850 to president pro tempore of the California Senate in April 1851. Throughout the 1850's, Broderick was the leader of the anti-Lecompton (i.e. anti-slavery) wing of the California Democratic party which was consistently in the minority. He was also one of the very few upholders of democracy when the two Committees of Vigilance took power in San Francisco in 1851 and 1856. In 1857, Broderick, master politician and tactician, had managed to get elected to the U.S. Senate by exploiting internal differences within the Chivalry.

What made Broderick such an interesting figure were not only his strong support of democracy and abolitionism -- and to his credit this put him at a serious disadvantage in California politics -- but also his radical politics and indefatigable defense of the interests of the working class. Despite being the second youngest U.S. senator, David Broderick did not shy away from participating in all the major debates of the time and letting his working class views known to his colleagues, very much an oddity in the Senate of the United States of America.

When Broderick arrived in Washington in late 1857, the major debate in the Senate of the Thirty-fifth Congress was the issue of whether to admit Kansas into the Union under the Lecompton Constitution. The constitutional convention for Kansas held in Lecompton was dominated by pro-slavery delegates. Despite the fact that popular sentiment was clearly against slavery in Kansas (because most settlers wanted access to as much soil as possible), the Lecompton delegates, through legal artifice, offered the voters a choice only between slavery or limited slavery, in clear offense of any notion of popular sovereignty. President Buchanan, however, in his state of the Union address on December 8, 1857, stated that he thought the Lecompton Constitution "in the main fair and just."

After speeches from senior Democrats, Senator Broderick then responded in his maiden speech to the Senate:

It is the first time, I believe in the history of this country that a President of the United States ever stepped down from the exalted position he held to attempt to coerce the people into a base submission to the will of an illegalized body ... I do not intend because I am a member of the Democratic party to permit the President of the United States, who was elected by that party, to create civil war in the United States. The only thing that has astonished me in this whole matter is the forbearance of the people of Kansas. If they had taken the delegates to the Lecomptom convention and flogged them, or cut their ears off and driven them out of the country, I would have applauded the act.

Having pronounced those last words Senator Broderick cooly sat down. The Senate then went into recess stunned by the raw and harsh honesty of the junior Senator from California. This was the senator's very first speech and he had already sternly criticized the President to boot, a member of his own party. But this was only a first taste of what was to come.

In the ensuing days, the Senate debated admitting Kansas into the Union under the Lecompton Constitution and more generally the issue of slavery. One of the chief defenders of slavery as a morally superior social system for organizing labor was James Henry Hammond, Senator from South Carolina. In a speech that was heralded throughout the South, where tens of thousands of copies were printed and distributed, Hammond stated:

In all social systems there must be a class to do the mean duties, to perform the drudgery of life ... Such a class you must have or you would not have that other class which leads progress, refinement and civilization. It constitutes the very mudsills of society and of political government; you might as well attempt to build a house in the air, as to build either one or the other, except on the mudsills. Fortunately for the South, she found a race adopted to that purpose.

After more senior Democrats responded, Broderick then got his turn. He began by reading from the text of Hammond's speech at length so as to remind the senators of its portent since the speech had been delivered a few weeks back. Then Broderick delivered a sharp rebuke:

I, sir, am glad that the senator has spoken thus. It may have the effect of arousing in the working men that spirit which has been lying dormant for centuries. It may also have the effect of arousing the two hundred thousand men, with pure white skins, in South Carolina, who are now degraded and despised by thirty thousand aristocratic slave holders.

Broderick's comments once again stunned the Senate and many senators on the floor could be heard mumbling in disbelief. What was the matter with this young senator from San Francisco? Did he not agree with the words Hammond addressed to his Northern colleagues when he discussed the consequences of empowering the slaves whether they be from the plantations or the industries of the North? Hammond had said: "Where would you be? Your society would be reconstructed, your government reconstructed, your property divided." Broderick's statement drove home very clearly the point that oppression of people resulted not only from racial exploitation but, above and beyond that, that a majority of people were exploited because of differences in class.

As if this weren't enough to shock the tender sensibilities of the senators, Broderick proceeded to attack another part of Hammond's argument by quoting a Romantic poem on power:

[The power that] linked with success, assured and kept with skill,

That moulds another's weakness to its will,

Holds with their hands, but still to them unknown

Makes even their mightiest deeds appear his own

The "progress, refinement and civilization," Broderick stated, which Hammond so proudly claimed to emanate from the ruling class was in fact the product of the hard labor of the "mudsills," of the working class constituted of all the black and white slaves who toiled away in anonymity for the benefit of the ruling class.

By now it should have been clear to all that David C. Broderick, unlike most U.S. senators, belonged, heart and soul and in upbringing, to the oppressed working class. If there was still any doubt about whom Broderick stood for and about his views on the contribution of labor to "progress, refinement and civilization," Broderick's concluding words would dispel any remnant of confusion:

I suppose the senator from South Carolina did not intend to be personal in his remarks to any of his peers on the floor. If I had thought so, I would have noticed them at the time. I am, sir, with one exception, the youngest in years of the senators upon this floor. It is not long since I served an apprenticeship of five years at one of the most laborious trades [stonecutter] persued by a man, a trade that from its nature devotes its followers to thought, but debars him from conversation.

I would not have alluded to this if it were not for the remarks of the senator from South Carolina, and that thousands who know that I am the son of an artisan and have been a mechanic would feel disappointed in me if I did not reply to him. I am not proud of this. I am sorry it is true. I would that I could have enjoyed the pleasures of life in my boyhood days, but they were denied to me. I say this with pain. I have not the admiration for the men of that class from whence I sprang that might be expected; they submit too tamely to oppression, and are too prone to neglect their rights and duties as citizens. But, sir, the class of society to whose toil I was born, under our form of government, will control the destinies of this nation. If I were inclined to forget my connection with them, or to deny that I sprang from them, this chamber would not be the place in which I could do either. While I hold a seat here, I have but to look at the beautiful capitals adorning the pilasters that support the roof to be reminded of my father's talent and handiwork.

After thus paying homage to the master stonecutter that was his father, Broderick delivered one last sharp criticism of President Buchanan in which he ascribed his attempt to pass the Lecompton Constitution against the will of the people "to the fading intellect, the petulant passion, and the trembling dotage of an old man on the verge of the grave!"

The senate then adjourned until the evening. A few more speeches were delivered and the vote was called. Approval of Kansas into the Union under the Lecompton Constitution passed by 33 votes to 25 as the Democrats held a majority of 37 and only four Democratic senators voted against the Buchanan administration.

Pressure in the House emanating from popular opposition in individual districts, however, resulted in the adoption of a compromise bill that would allow Kansans to vote indirectly on the slavery provisions of the Lecompton position. At this point, the Chivalry-controlled California legislature then sent instructions to its two senators, Gwin and Broderick, to vote with the administration in favor of the amended bill. But Broderick would never vote for a measure which he felt was against popular sentiment. When Gwin was reading the instructions of the California legislature, Broderick rose to the floor, stated he would ignore the instructions and added that "four-fifths of the people of California repudiate the Lecompton fraud. I shall respect the wishes of the people."

When the Thirty-fifth Congress adjourned in June of 1849, Broderick returned to California very depressed and convinced that his political prospects were finished given that his faction was crushed as it was between rising Republicanism and Lecompton Democracy. The coming elections in California would clearly be the most bitter struggle for power Broderick would ever face. To friends in Washington and New York, the radical senator said, for the first time, that he would either resign or even be killed by Chivalrists desiring to silence him.