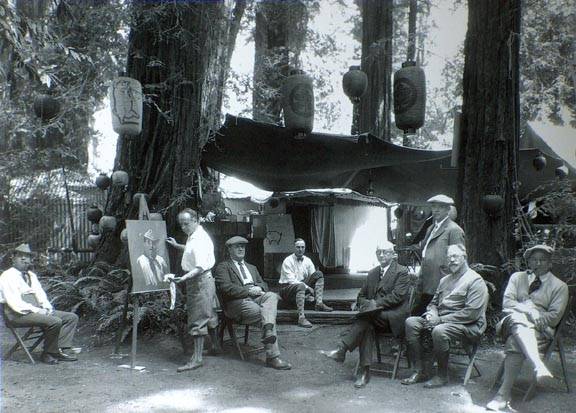 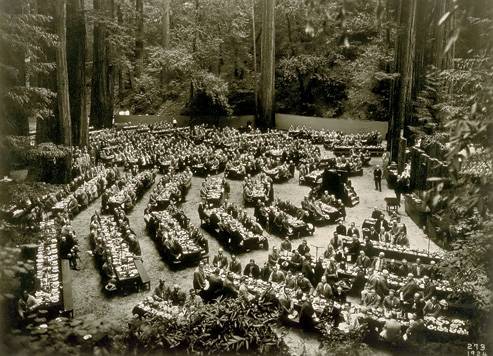 Outdoor dining at turn of 20th century under the redwoods in Bohemian Grove, Sonoma County.

When Rudyard Kipling visited San Francisco in 1889, he attended a dinner party at the already-famous Bohemian Club, then located near the corner of Pine and Montgomery. In a published account of his travels, American Notes, he described the evening as being distinguished by a "most unrepublican luxury:"

... In this club were no amateurs spoiling canvas because they fancied they could handle oils without knowledge of shadows or anatomy -- no gentleman of leisure ruining the temper of publishers and an already ruined market with attempts to write ... My hosts were working, or had worked, for their daily bread with pen and paint ... (Jackson, p. 371)

What Kipling observed was in fact the founding spirit of the Bohemian Club, which started as an informal association of journalists, artists and writers meeting at the home of Chronicle columnist James Bowman in the early 1870's. By the time of Kipling's visit, however, the club was already on its way to becoming the sort of center of high-profile business and political leaders that would have Barry Goldwater announce ingenuously upon entering the club's campground in 1964, "I've been trying to get here for 10 years." 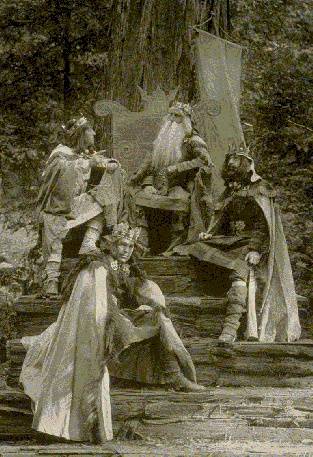 Participants in an early Bohemian Club "Jinks" indulge their inner kings during a session with SF photographer Gabriel Moulin, c. 1907.

The original gatherings were planned as Sunday breakfasts at Bowman's home on Russian Hill, though they often lasted through dinner and involved proportionate amounts of wine and rant, the tablecloth becoming covered with the inspired doodlings of its guests. According to a popular account, the hostess frequently refused to wash the table linens, preserving them as a kind of impromptu guest-book of her salon.

Within a year the Sunday festivals had tripled in size, attracting some of the most talented writers and artists of the city, including the great illustrator Jules Tavernier and the columnist Ambrose Bierce. Needless to say, the salon's popularity also succeeded in attracting its share of poseurs and freeloaders, creating a need for a private meeting space and a well-managed guest list.

In 1872 Bowman relocated the club to the back rooms of a local watering hole, "Jolly Corks." It was here, among an all-male crowd of intellectual revelers, that a club charter was finally drafted promoting alcohol, argument and "good-fellowship among journalists." Artists, writers, and actors were also welcome, provided the membership approved and received payment of annual dues. It was also at Jolly Corks that the club began staging the in-house performances that would distinguish it through the coming century. It called the events "Jinks," after an old Scottish drinking game of wits.

Kipling was fortunate enough to attend one of the early Jinks -- fortunate because club rules forbade anyone not an approved guest to observe the performances, which were exclusively male, self-produced, and one-time only affairs. Fortunate also because it was in the relatively early days of the club and much of the founding talent was still intact. Yet even then, after less than twenty years of existence, the club was beginning to display some of the rabid nationalism and business thrust that would later attract such figures as William Randolph Hearst, Herbert Hoover, Ernest Lawrence and Richard Nixon. The ferocity was such that even a budding jingoist such as Kipling was alarmed.

According to his account, after a rich meal and mixed drinks the guests retired to the club's back room, where the members proceeded to deliver speeches in praise of that evening's honored Bohemian, a retired Lieutenant of the U.S. Navy.

"It was my first introduction to the American Eagle screaming for all it was worth," Kipling wrote. "The Lieutenant's heroism served as a peg from which the silver-tongued ones turned themselves loose and kicked." While Kipling felt some embarrassment for the forty-plus speakers that night -- notably, a "wicked desire to hide my face in a napkin and grin" -- his account does not express much more than amusement at his hosts' expense.

Kipling's notes are valuable because they describe the Bohemian Club at a time when serious divisions were becoming apparent -- namely, the growing antagonism between the club's founding principles (the first charter actually excluded publishers of newspapers from membership) and the encroaching influence of business. Just a few years earlier, Oscar Wilde, visiting San Francisco on a lecture, was heard to quip of a Bohemian Club affair, "I have never seen so many well-dressed, well-fed, business-like-looking Bohemians in the whole course of my life." In just a few decades this shift would be complete, making the club originally founded as an intellectual retreat the preferred association of nationally-prominent bankers, executives, California governors and Republican presidents.

Ironically, one might say that the club began to betray its ideals upon its very founding, as the institution of the Sunday breakfasts was essentially an incorporation in the interest of property. The Bowman home where the original members had been meeting on irregular Sundays became incapable of accommodating the growing number of guests; thus a motion was put forward that they organize a club with its own "official, permanent meeting place." With this decision came a need for funds, and consequently members who could pay annual dues. Initially there was even some opposition to the naming of it as the "Bohemian Club" as a number of well-heeled editors objected to the linking of their club with "seedy, long-haired, pandhandling garret-dwellers." (Van Der Zee, p. 17) Yet the Bohemian title eventually won out, marking the first instance of the club's characteristic appropriation of artistic laurels in the pursuit of power and exclusion.

The next major push towards a well-financed membership came in 1878 with the first "encampment," or club retreat, in the redwood forests north of San Francisco. Though the outing was intended as a "leveling" exercise to smooth over the growing social and economic divisions within the club, it was such a success the club began planning a property purchase along the Russian River, quickly transforming the "leveling" experience into an elitist acquisition, complete with 160 valuable logging acres, "No Trespassing" signs and a private railroad extension.

By 1890, even the publisher William Randolph Hearst was an honorary member of the Bohemian Club -- a complete about -face from the club's original charter excluding owners of newspapers. Soon the annual encampments themselves had become privileged, luxuriant affairs. As the critic and Bohemian Club member Porter Garnett would write in his 1908 defense of the club's so-called "grove plays:"

"... The organization and equipment of such a camp has, in late years, assumed colossal proportions and involves the expense of many thousands of dollars." (Garnett, p. 17)

Garnett, though a talented critic in his own right, was nonetheless one of the turn of the century Bohemians lured to the club by the promise of patronage by its affluent membership. Other such "associate" members included the poet George Sterling, the writer and (nominal) socialist Jack London and the playwright Will Irwin.

Initiation fees and annual dues for associate members were waived, but with a big catch: the so-called "creatives" were expected to write and produce the club's entertainments for the year, including monthly productions at the club's city quarters, the farcical "Low Jinks" at the annual encampment at the Russian River, and most importantly the flagship "High Jinks," an idiosyncratic dramatic convention enacted on a redwood stage and characteristically enlisting large numbers of faeries, sprites and paunchy bankers among the cast.

Yet it was this co-opting of San Francisco's creative energies that perpetuated the Bohemian Club's reputation for culture. According to the San Francisco writer John Van Der Zee, the Bohemian Jinks represent "an endorsement of the propertied man's deep convictions about the arts: we could do it, if we wanted to." (p.46) 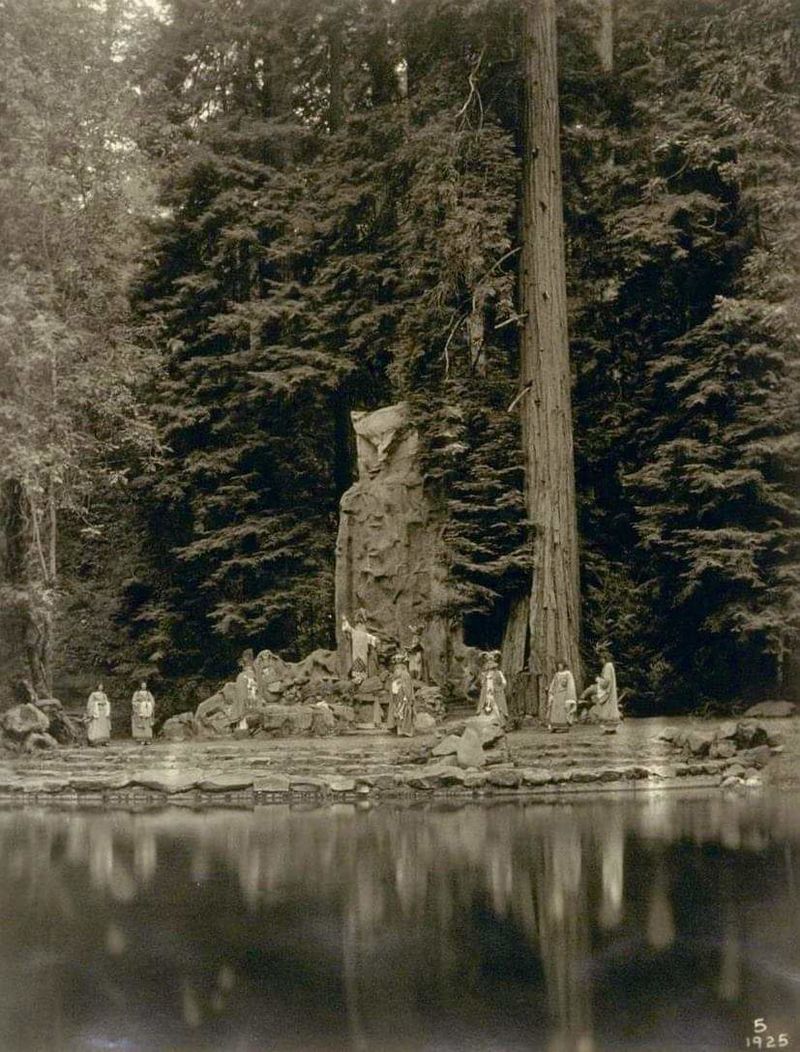