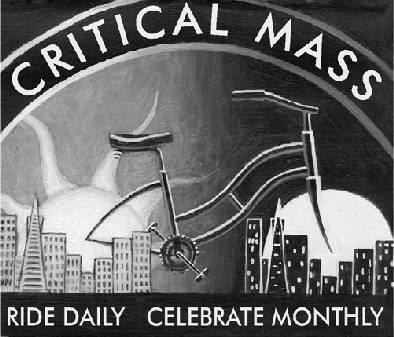 The number of people who ride their bicycles to work in San Francisco has at least quintupled since Critical Mass started six years ago. The indescribable authenticity of the Critical Mass experience has been transmitted primarily through direct word-of-mouth. The mass media has failed to get inside the Critical Mass phenomenon, portraying it largely as a quirky gathering of freaks that mysteriously reoccurs monthly, if it's noticed at all.

Nevertheless, bicyclists are still dying on San Francisco's streets, thanks in part to the delays and inaction of city bureaucrats. 23-year-old Rebecca Kresse was killed when a bus slammed into her at 24th and Valencia on September 2, 1998 at 7 p.m. in broad daylight. This accident cannot be undone. How many more fatalities will we suffer before there is a meaningful transformation of our streets to accommodate everyone's safety?

We know that thousands of potential cyclists would cautiously venture into San Francisco's streets, if they could see a recognized, safe place for them on the street. The Comprehensive Bike Plan is seriously inadequate. An uncharitable explanation of it would be that it is designed to funnel money to the city's sign making department and asphalt painting division. The scattered bike lanes being created do little to promote bicycling safety and much to provide double parking lanes for delivery vehicles and impatient motorists.

While we say "get on with it" to the city, what's really needed is something much bigger. A sincere endorsement of bicycling as at least a partial solution to gridlock and the collapse of public transit requires a systematic redesign of city streets to accommodate a designated, bike-only grid of thoroughfares. Painting lines on streets is not enough. Safe cycling requires separate bikeways, which -- if we're clever enough -- can also be opportunities for public art and horticulture (line them with murals, paintings, bulletin boards, graffiti zones, free speech walls, and publicly owned fruit trees: Lemon Tree Lane, Peach Path, Berry Bikeway, etc.).

Ironically the rise of transportation activism has coincided with a near collapse of San Francisco's public transit, acutely embarrassing the self-important Impresario-Mayor Brown. This limousine liberal has presided over one of the most rapacious and corrupt periods of San Francisco's famously corrupt history, with ugly and offensive development projects planned for every open corner of the City. Meanwhile, Brown thumbs his nose at citizens, giving his attention to rich developers and union labor while screwing unorganized workers, tenants and transit advocates. He has barely paid lip service to the demands of bicyclists and potential bicyclists, as his appointed commissions have rejected most of a meager compromise, leaving the much-touted Comprehensive Bicycle Plan in tatters. Urban ecology? Green city? Alternative transit or energy? This mayor says: Pave It! And because he supports doing it with Union Labor he thinks he's a "progressive"!

Mayor Brown envisions malls and freeways and chains in the hoods, leading inevitably (as his status quo ideology promises) to a certain material comfort that is supposed to be the reward for enthusiastic acquiescence to the rule of the Market. Obviously he enjoys that reward, zipping around in his limo from haberdashery to opera, photo op to press conference. But most of us wonder how long we'll be able to stay in San Francisco. How long can we slip under the skyrocketing cost of housing? What will happen to us when the next "economic crisis" hits?

Brown's public silence on the class issues that divide San Francisco underlines his ongoing sell-out to private business interests, from landlords to biotech moguls, bankers and multimedia promoters. The transportation crisis is an unsolvable irritation which he'd really like to help us forget.

This last decade of the 20th century has been full of surprises. Who'd have thought it would begin with the collapse of the Soviet bloc? Who would have thought aggressive expansion of the market economy across the planet would encounter such weak and ineffective opposition? Who would have thought the alternative hopes and visions, so rich and exciting in the 1960s and 70s, would so completely capitulate to the incessant logic of buying and selling -- i.e. modern capitalism?

Since the 1920s and the rise of the mass-produced automobile, the U.S. economy has been dependent on two foundations -- the car and war. Periodic depressions, recessions and downturns have been superceded when war spurred economic growth. Between wars, the frenzied growth of urban and suburban America (built on cars and roads) has colonized more and more of society, placing all values and human experiences below the unquestioned logic of economic expansion. The rotten fruit of this social arrangement is all around us: pollution and ecological breakdown, gridlock and public transit collapse, overwork and profligate wealth amidst growing poverty and homelessness, alienation, boredom, rage, despair, and increasingly a social order built on rampant incarceration.

But, true to form, dismaying evidence of social decay and rising barbarism only obscures exciting developments that always rise alongside and underneath the ruling order. Since the early 1990s an unprecedented social movement has erupted and spread spontaneously across the world. Bicyclists have gathered in Critical Mass rides on most continents and in over 100 cities. Reclaim The Streets and direct actions against road building have erupted all over Europe, Australia and even occasionally in the U.S.

Humans are resourceful, especially in the face of adversity. The simple choice to ride a bicycle becomes an assertion of common sense and an act of radical refusal. By bicycling, we refuse to participate in our own degradation on an increasingly dysfunctional public transit system. By bicycling we refuse to pay the enormous costs of a murderous transit system built on private cars. When we bicycle, we refuse the perpetual marketing noise of corporate advertising piping into car radios, and we refuse to accept as "news" the shallow and intellectually retarded reporting that claims to be objective and true. When we bicycle we subvert our "responsibility" to behave as loyal members of this society, undercutting the auto economy, challenging the propaganda system, and directly re-creating meaningful encounters with one another.

Bicycling is generally a very individual experience, especially on streets filled with stressed-out motorists who don't think cyclists have a right to be on the road. But when we ride together in Critical Mass, we transform our personal choices into a shared, collective repudiation of the prevailing social madness. The organic connections we've made (and continue to make anew, month after month) are the root of a movement radically opposed to the way things are now. As we continue to share public space free from the absurd domination of transactions and the Economy, we are forging a new sense of shared identity, a new sense of our shared interests against those who profit from and perpetuate the status quo. Having discovered ourselves as a group with shared interests, we bicyclists must creatively seek connections to the other members of society with whom we share basic qualities -- lack of political power, victimization by a social system that systematically pits us against one another, a desire to make deep changes that will make our lives better, and so on.

Bicyclists are mostly part of the largest group in society -- the working class. All the cultural and political divisions between us serve the interests of the tiny group who make the decisions about how our lives will be: decisions about technologies, resources, transit systems, the global market itself (what will be produced, by whom, and to what end). Our personal choices about what to buy, which goods to consume, how to get around, etc. are important to be sure. But the crucial decisions that shape the environment and the social system in which we make our decisions, are made undemocratically and self-servingly by the wealthy few and their bought-and-paid-for political allies. It is to this deeper dynamic that we must address ourselves.

Our "leaders" are worried by the uncontrollable nature of Critical Mass. Grassroots initiatives that challenge land use, real estate development/ speculation, public investments, transportation priorities, etc., are annoying obstacles for the rulers of today. Co-optation or demolition are their favorite strategies. Our task is to elude their clumsy attempts to control us. Our imagination, creativity, enthusiastic passions, and mobility give us more power than many of us know, and more chances to change life than we generally feel we have.

May our wheels keep spinning, both inside us and among us, not to mention between us and the ground!