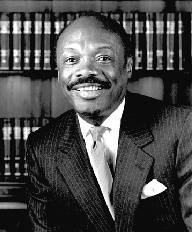 Brown won a three-way race for the mayoralty against incumbent Frank Jordan and lesbian lawyer Roberta Achtenberg in 1995.

Willie Brown has been an Assemblyman, criminal defense lawyer and shoe-shine boy. He was Speaker of the California Assembly for 15 years -- longer than anyone else, ever. Now, as San Francisco's Mayor, no one can say that he hasn't paid his dues.

It's been a long time since he charged fifty cents, or a quarter, scooping his pay out of a slimy spitoon, in Mineola, Texas -- crossing the tracks in his hometown to work in a "whites only" barber shop -- shining the other half's shoes. Now his law firm charges corporate clients hundreds of dollars an hour. It's easy to remember his ambition, deal making, and slick dressing, but often overlooked is his compassion for his constituents and a long record of supporting progressive causes.

San Francisco native Darrell Rogers (b. 1945 in the Fillmore) gives his views of the former Mayor, San Francisco's first African American mayor and one who used his connections to the community to great personal advantage.

In the 1950s a young Willie Brown attended Hastings Law School. Then, as now, graduation didn't guarantee a job. There were no corporate openings for a young black lawyer. Instead of leaving for greener pastures, Willie started his own private practice in San Francisco. His law office was primarily involved in criminal defense cases. Brown is often criticized because his business catered to the lower class -- "pimps, prostitutes and hustlers." Brown was accused of protecting degenerates. 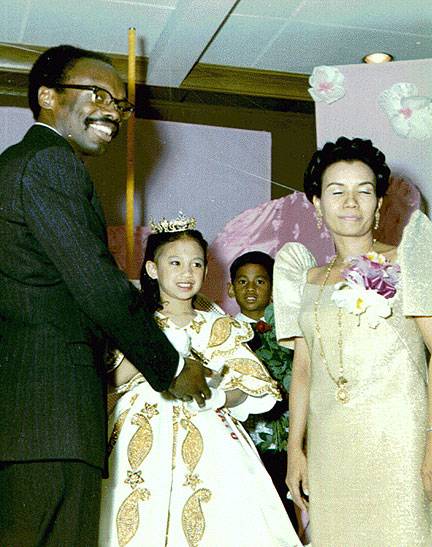 Brown at a Filipino wedding in the early 1960s.

In 1961 Brown wanted to buy a house. He went to Forest Knolls. The real estate developer refused to let him, a black man, enter the display model. This racial incident instigated a lawsuit against the developers that was eventually won.

Brown was also involved in Western Addition Community Organization (W.A.C.O.), resisting the S.F. Redevelopment Association, and its plan to gut the low income housing stock and clear the central city of "blight." This project amounted to a "war on the poor." Western Addition Redevelopment Zone A-1 displaced four thousand households for the sake of a Japanese trade center, luxury housing, and an express boulevard. Redevelopment director Justin Herman remarked that W.A.C.O. was, " ... a passing flurry of proletarianism." Whatever its political meaning, in 1971 a federal judge tripled the required subsidized housing to make up for that housing being torn down. Ironically, Brown would legally represent some of the major developers associated with another redevelopment project in the 1980s, the Moscone Convention Center.

As early as 1966 Willie Brown was campaigning for Gay Rights (and votes) by introducing legislation to repeal an 1872 statute making crimes against nature a felony. This law was used to prosecute (and persecute) many homosexuals for sodomy. The new bill made private, consensual sex legal. However, because there could be no repeal for eight years, then-Governor Ronald Reagan promised to veto it. When it finally passed, a signal spread to the rest of the country.

In 1977 a Dade County Gay Rights ordinance passed in Miami. An outraged Anita Bryant got on her high-horse, and rode to the rescue of God-fearing Americans everywhere. Even though Willie Brown, and other S.F. notables (including then-Sheriff Richard Hongisto and gay Supervisor Harvey Milk ) went to Miami in order to support the bill, Bryant's Save Our Children group won the repeal vote.

More recently, in 1993 Brown was a thorn in the side of Governor Pete Wilson. He single-handedly held up the State budget for 63 days until Wilson added $1.1 Billion to public education. Some say this was evidence that Brown was serving the powerful teacher's unions, but this money provided even more to the millions of California schoolkids.

After more than 30 years in state politics, Brown has his share of detractors. Some question the morality of the defendants in his council, others make disparaging comments about his stylish wardrobe.

Most suspicious is his connection* to real estate developers, who kept Willie Brown, the Speaker of the Assembly, on retainer. A legal loophole in California law allows state legislators to receive donations from corporations that are currently lobbying for bills without "conflict of interest." Thus there is no legal basis for suspicion. Willie Brown the lawyer can be paid, without biasing Willie Brown the Speaker of the Assembly, or currently, Mayor. His tactics make use of his "behind the scenes" knowledge of the power players in local politics. A long FBI investigation and sting-operation in Sacramento targeting corrupt state officials failed to find anything incriminating on Brown, in spite of much effort and political motivation. [Recent 1999-2000 investigations of corruption in the Housing and Human Rights Departments of the city have also found no evidence of involvement by "da mayor".]

Historically, Willie Brown has a record for supporting positive social change. He is one of the few outspoken liberal politicians who is neither perceived as a kook, or a proselytizing demagogue. He shows that progressive agendas can be addressed by bureaucratic institutions.

As Mayor, Brown plays both sides: a minority liberal who understands big capital. He has ordered his District Attorney Terrance Hallinan to dismiss 37,000 cases against the homeless. This glut was amassed by the MATRIX program of the previous Mayor, Frank Jordan. However, police continued to cite homeless in numbers matching the previous administration's, although no longer under the rubric of MATRIX. Moreover, a lack of far-reaching reorganization revealed this cancellation of MATRIX as a showy tactic, rather than a heartfelt plan. The fact that he was voted into office is a blow for the repressive policies that characterized the previous administration. 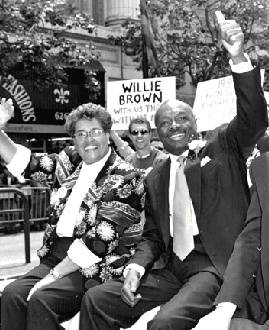 Brown's long association with developers and his reputation as a deal maker ensures that his legacy will involve a number of large new developments. In a special election in June 1997, public bonds were passed to support the building of a new mega-mall and stadium for the football 49ers to replace Candlestick Park. Brown used all his political skills to mobilize the African-American community (which voted over 80% in favor of providing a $100 million bond to the billionaire owners of the 49ers) and passed Propositions D and F by a slim 1,000 vote margin. Plans are moving forward to begin the massive Mission Bay project, to rebuild the DeYoung Museum, and the Civic Center/City Hall rebuilding project should be completed during his term. Brown will no doubt gain a reputation as a "can-do" mayor, using his connections and skills to facilitate the biggest building boom in San Francisco history, while offering minor improvements in local services with the huge increase in tax receipts the city is enjoying during the late 1990s economic prosperity.

Willie Brown was pied by the Biotic Baking Brigade on Nov. 7, 1998.

Willie Brown was reelected in December 1999 after a runoff election was forced between him and city Supervisor Tom Ammiano, who won a last-minute write-in campaign in November (ex-mayor Jordan, political consultant Clint Reilly and Roberta Achtenburg lost in the first round). His reign was challenged by a concerted effort from tenants and other left-leaning activists, who were fed up with his Imperial rule...

In November and runoff elections in December of 2000 (done by district for the first time since the Moscone-Milk killings), Mayor Brown's allies on the board of supervisors were decisively defeated.

Willie Brown presided over the first dot-com boom in San Francisco, cheerleading while thousands were displaced by the influx of speculative tech money in 1999-2001. Here he lays out his thinking during an interview in City Hall in 2000.

While several architects maneuvered for control of the massive Yerba Buena Center project, Brown was hired prior to the final selection. He introduced the president of Olympia & York, (a firm favored by Marriott ) to then-Mayor Dianne Feinstein. These "5 minute courtesy calls" and glad-handing seem unsavory for an elected official, but they are not uncommon--for Willie Brown, or any other politician.

The most significant of his corporate relationships was with the Santa Fe-Southern Pacific Corp. (S.P.), and its subsidiary Catellus Corp. Willie Brown's law office was on retainer from 1982-1994, while he was Speaker of the Assembly. Over those 12 years he was paid $396,000+ in fees. During this time S.P. was promoting its massive Mission Bay project here in San Francisco and many other schemes elsewhere in California. Also, in 1989, Cal-PERS (state employees pension fund) invested $475 million in S.P. stock. When this money was funnelled into the newly created Catellus Corp., Cal-PERS lost $200 million in this paper transaction. Brown states that he was not consulted during the deal. In fact his response is typified by the remark, "I will only excuse myself when there are conflicts as required by law and good judgement. I know of no such conflicts."