The Great San Francisco Fire of 1906 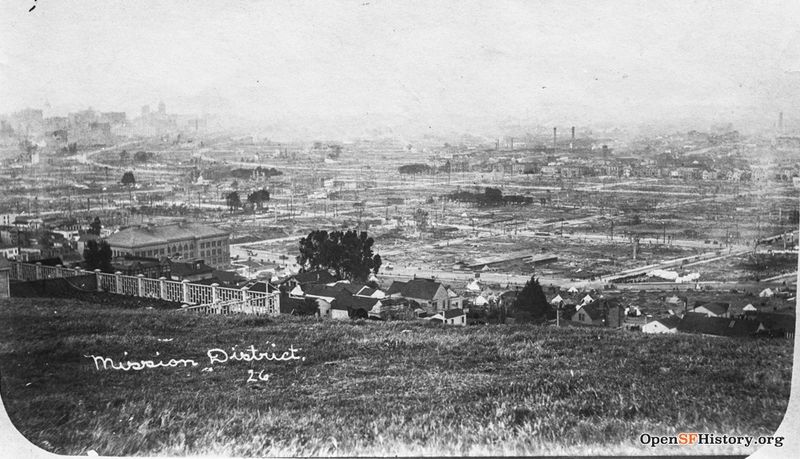 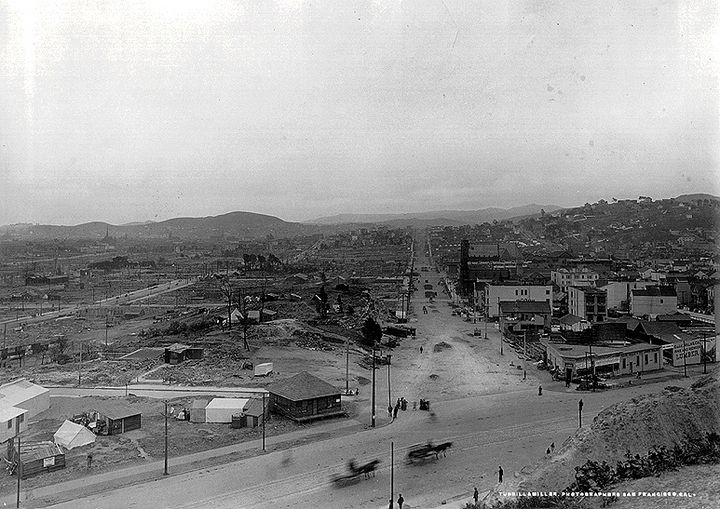 Looking south along Dolores Street after the devastating 1906 quake and fire, viewed from today's Mint Hill above Market. 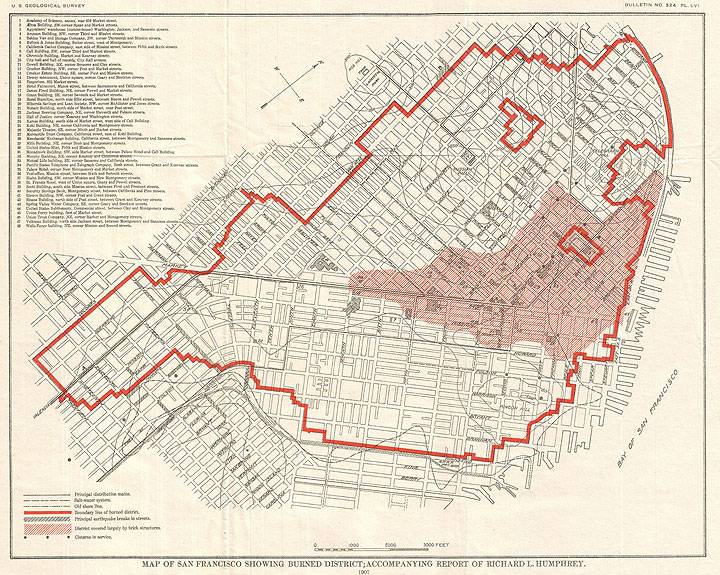 1907 Geological Survey Map of San Francisco after the 1906 earthquake, showing the area burned by the fire. 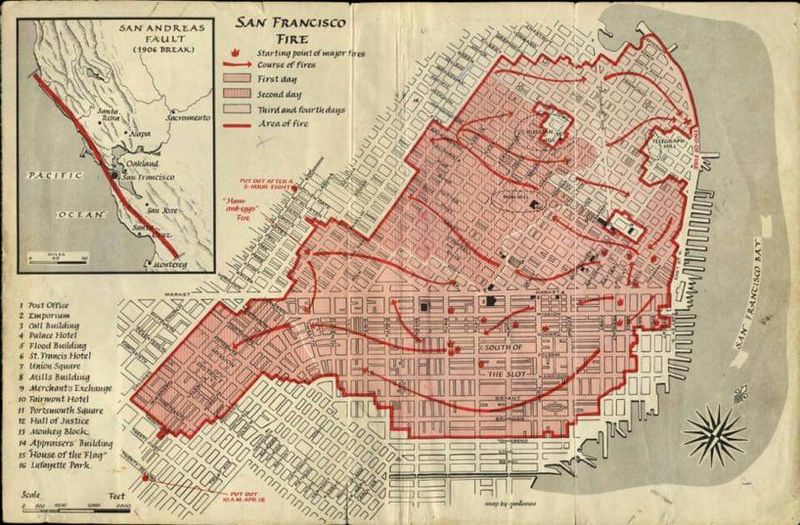 The following is excerpted Arthur C. Poore's eyewitness account of the 1906 earthquake and fire:

"At the corners of Larkin and Polk, on Golden Gate Avenue we found a perfect hell of fire. It was now feeding on a solidly built section of wooden buildings; I shall never forget the fierceness and viciousness of those flames roaring like a blast furnace, and their steady crackle like musketry fire.

"The upward draft of such a fire was terrific, the air rushing in from all sides to a common center and being sucked upward. It was estimated that the smoke rose to a height of a thousand feet. To show the tremendous power of the draft, great pieces of sheet iron roofing ten feet square were torn loose after being nearly burned free from the wooden roof and whirled upward into the air, out of sight like leaves in an autumn gale. I watched a three-story dwelling house catch from the next house and timed it with my watch. In twenty minutes the cellar remained, nothing more. Not even charred and blackened timbers. Combustion was complete and absolute.

"It was interesting and yet terrible to follow the course and spread of the flames from one structure to another. An entirely new block would start from the heat of a building across the street with just a tiny flickering flame in the eaves which could have been extinguished with a pail of water. In less than two hours the whole block, solidly built and bounded by four streets, would show nothing but the cellars, and the fire would be one street nearer our house. From time to time the soldiers would warn us away from houses not yet on fire as they were to be dynamited in an effort to check the flames.

"This work was done by a detail of artillerymen under a lieutenant from the Presidio and had been going on since nine o'clock that morning in a vain attempt to stem the rush of flames. For three solid days the steady boom of dynamite explosions at intervals of five minutes, night and day, shook the air. Dynamite from every point in the state and even from the mines in Nevada was rushed to the city for this purpose.

"One of the houses consumed at this point was a small cottage which had collapsed from the quake. It was simply a heap of timbers resembling a handful of matches thrown down on the floor, and if there were any dead bodies or injured persons in the ruins they were burned when the fire reached them, as no effort had been made to pull the wreckage apart. There is no doubt that a great many bodies were consumed in this way and, therefore, no record of their deaths obtainable. The only official records of death by the quake were based on the number of bodies that passed through the coroner's hands. The soldiers and citizens buried a great many bodies without official authority before any sort of order was brought out of the general chaos.

"The fire was not simply raging at this section but had crossed Market below Shreve's and was spreading down Kearny toward the Hall of Justice and Telegraph Hill. That is, it was moving in two directions at right angles and was already half a mile in length. I saw a pathetic sight at this point. A woman was trying to push a sewing machine over the rough pavements with one hand, and with the other her little boy's velocipede. No doubt the machine was her only means of livelihood, and her mother's love was so strong she could not leave the toy, useless as it would be. The boy was not in evidence; perhaps he had been dead for years and she wished to save from the flames some remembrance of her child. There were no tears; her face was stony, perhaps from despair. In fact, during all those days I did not see a single woman shed a tear. Perhaps they realized the uselessness of tears and complaints, for everyone had their troubles and there was no one to turn to for help.

"As I look back on it all now, it seems as though we conducted ourselves with a matter-of-fact demeanor, as if our lives were moving in the usual way. The strangeness of it all, the unheard-of conditions in which I was moving never came home to me until long after when I was safely back in Boston. Then I would get to thinking of those events at night and lie awake until two o'clock in the morning, wondering if it had only been a strange and horrible dream.

"After about an hour we went back to the house and found Mrs. Thompson and her sister had packed up their most precious gowns and a bundle of bedding. Everything else, pictures, furniture, and so forth, had to be left to the flames, yet there was no complaint heard. I can see the parlor now in all its confusion: pictures down, bric-a-brac shattered, and the heavy, low, squat andirons upside down and several feet away from the fireplace.

"All that afternoon Mr. Thompson and I made frequent trips down Larkin Street in an endeavor to gauge the progress of the fire toward our house. At four-thirty I went down to the store and found only two or three co-workers there besides the guard of soldiers. The fire was evidently not going to strike the store by way of Grant Avenue but seemed to be circling around and beyond it in such a way as to reach it from the California Street direction. I later learned that the store caught fire at about seven o'clock that evening.

"I was rather hungry about this time and thought I would get what might prove to be my last meal for an indefinite period. So I went to the Wolf Restaurant on Pine Street near the corner of Grant Avenue and succeeded in getting a sandwich and a glass of milk. There were two others beside me eating, and it struck me as very ludicrous that a restaurant keeper should attempt to serve so few patrons at such a time, with the fire only two streets away and with no means of cooking, all the gas supply being cut off by the breaking of the mains.

"Returning to the house I had a brilliant idea. Water still came from the faucets in our house, and as we still had a faint hope that the fire might not reach us, I proposed that we fill the bathtub with water while we could, to guard against a famine of that useful article. This was done at once, but as we quit the house five hours later, we did not use it. Who knows but what those humble gallons of water delayed the burning of our poor old house a few minutes. More likely they were instantaneously turned to steam.

"At about six o'clock we sallied out and bought what we could find in the way of food, there being none in the house. All that we could find were three pies which did not go a long way with fourteen people. It was now dark, or rather, time for darkness, but the reflection of the flames made the parlor light enough to see our faces. It was a very solemn and impressive time, I can assure you. All day long at intervals there had been slight aftershocks, and these served to keep us keyed up to a certain tension whenever indoors, knowing as we did that the house was already terribly racked and strained.

"As we sat there we could hear the incessant rattle of the small castors on trunks as they were dragged by their exhausted owners over the sidewalk. Everyone spoke of this noise afterward and the impression it made on them. All day long as well it had been going on, a steady stream of people driven toward the parks by the approaching flames. When there were two people, the usual method was to tie a cord to the handle and pass it over the shoulder while the other pushed on the trunk. You can imagine the weary work over rough sidewalks with tiny wheels on a heavy trunk. Every few yards you would see them stop to rest and then patiently take up their task again.

"We heard reports throughout the day that Portland and Seattle on the north and Los Angeles on the south were in ruins and that the shock had been felt as far east as Denver, so you can see that we felt very much as though the end of the world had come, or at least the end of the United States, and we wondered where help was to come from. But as we discovered later, Los Angeles was even then assembling food supplies and preparing to rush them five hundred miles north to our aid.

"I do not know just how we came to abandon our house, but I suspect Mrs. Thompson decided the matter. At midnight she suggested that we go across the street to a livery stable or place where carriages were stored (they had no horses) and tell the proprietor that if he would loan us a vehicle of some sort we would use it to take our luggage to the park and he could claim it after the fire. As this offered a means of saving a carriage from the flames, he took our names and offered us our choice of the rigs. We selected a trap, one of the kind where the tailboard lets down to serve as a footrest for the people riding backward. On this we piled fourteen dress suitcases, various bundles, and all the blankets in the house, as well as a frying pan and dishes.

This account by Arthur C. Poore first appeared in the Spring, 1990 issue of The Argonaut, a journal of the San Francisco Historical Society. According to research conducted by Dr. Robert J. Chandler, history officer at Wells Fargo Bank, Arthur C. Poore appears to have been a recent arrival to San Francisco at the time of the 1906 disaster.