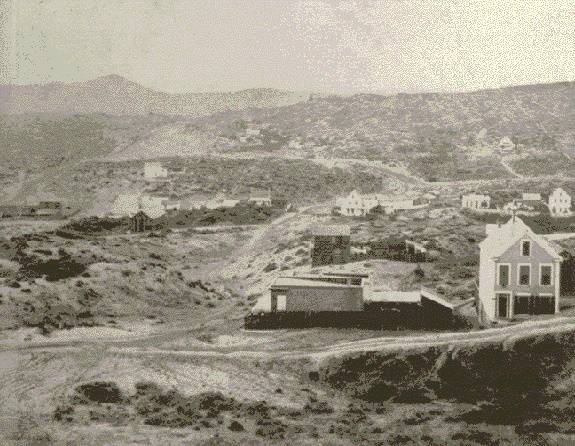 Looking westward across today's Polk Gulch from western slope of Nob Hill in the 1860s. Gough and Franklin top the ridge in the foreground with Lone Mountain in the distance.

Polk Gulch is located between Russian Hill and Nob Hill. It was built up primarily as a neighborhood shopping area for the wealthy on either side. The Polk Street area south of California Street attracted many Germans and was often referred to as "Polk Strasse."

The 1906 earthquake and fire destroyed much of the German area but was rebuilt by the community. In 1910, the German National Community Hall, called California Hall, was completed to celebrate their successful return from the rubble.

As the downtown area began to expand west, many of the Germans were forced to leave. By the late 1930s, much of the German character had been forced out, to be replaced by residential hotels and downtown commercial interests.

In the 1950s, Polk Gulch became the focus for a segment of the gay and lesbian population, who were attracted to the area by the relative freedom from persecution, and the lack of neighborhood tension. Numbers of businesses and restaurants serving gay/lesbian clientele were opened during the 1960s, and the area experienced economic growth as a result of these businesses. Polk Street continues to be an active commercial and entertainment center for this diverse community.

The following 23 pages are in this category, out of 23 total.