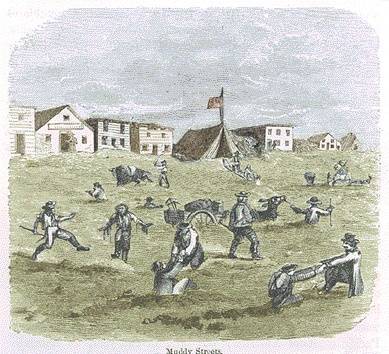 The streets of early San Francisco were turned into a quagmire which swallowed carts and pack animals.

There was no such thing as a house to be found. Scarcely even a proper house could be seen. Both dwellings and places of business were either common canvas tents, or small rough board shanties, or frame buildings of one story. Only the great gambling saloons, the hotels, restaurants, and a few public buildings and stores had any pretensions to size, comfort or elegance.

The site on which the town is built was then still covered with numberless sand-hills. The streets were therefore uneven and irregular. By the continued passage of men, and of horses and drays with building materials and goods, while the rainy season (which commenced earlier than usual, and was remarkably severe) was shedding torrents from the clouds, the different thoroughfares were soon so cut up as to become almost, if not quite impassable. Indeed both horse, or mule and dray were sometimes literally swallowed up in the mud, while their owner narrowly escaped a similar fate. The town authorities caused numberless cart loads of brushwood and limbs of trees to be cut from the surrounding hills, and thrown into the streets; but these only answered a limited and temporary purpose. The difficulty could not thus be remedied. 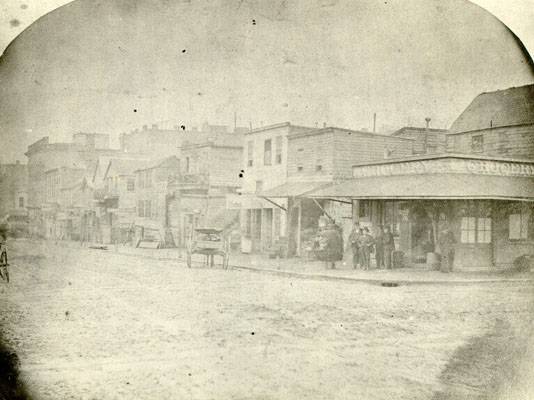 Nobody troubled himself to remove any rubbish from the way; but inmates of tents and houses satisfied themselves with placing a few planks, tobacco-boxes, bags of coffee, barrels of spoiled provisions, or any other available object, across and along the worst parts of the roads, to enable them safely to reach their own dwellings. It was not for everybody, however, to attempt to navigate these perilous places, or hope to keep on the narrow, slippery, unsteady, and often interrupted path which spanned the unfathomable abysses of mud and water which lay on all sides. Lanterns were indispensable to pedestrians at night, and even in daylight not a few would lose their footing, and find it difficult to extricate themselves from their unpleasant predicaments.