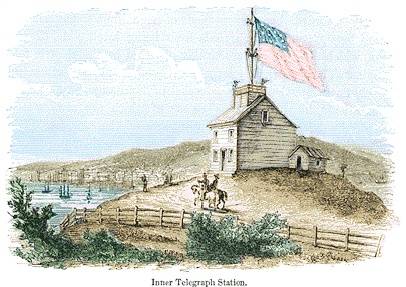 SEPTEMBER 22d. Opening of the first electric telegraph in California celebrated. This extended eight miles, between San Francisco and Point Lobos, and was erected by Messrs. Sweeny & Baugh, to give early information of shipping arrivals. Early in 1849 this enterprising firm had erected a station-house on Telegraph Hill, which commanded a view of the entrance to the Golden Gate and the ocean in that immediate vicinity; and having adopted a variety of appropriate signals, well understood by merchants and others in the city, were enabled to give early intimation of the approach and peculiar character of all vessels coming into the harbor. This proved of immense value to newspaper publishers and other business men, from whom the enterprise received a liberal patronage, it being principally supported by voluntary contributions. Thus encouraged, Messrs. Sweeny & Baugh afterwards established another station at Point Lobos, overlooking the ocean, from which, on a clear day, vessels may be distinguished many miles distant. This station is in full view of that on Telegraph Hill, which, receiving early signals from it, communicated them at once to the citizens, who were thus apprised of the arrival many hours before the vessel entered the harbor. The electric telegraph is still another improvement, and increases materially the facilities previously afforded by the method of signalling. Occasionally heavy fogs prevented the signals from being intelligible, or even seen, which difficulty is measurably obviated by the electric telegraph. The proprietors have also established in Sacramento street, near Montgomery, a Merchants Exchange, supported by subscription, in the spacious rooms of which are always to be found the latest papers from all parts of the world. These enterprises have proved exceedingly lucrative to their projectors.