FROM ARIZONA TO ALCATRAZ: Hopi prisoners on Alcatraz

More than a million people visit Alcatraz each year, but few know that, for almost eighty years, the island was the site of the first fortress and military prison on the West Coast. Declared a military reservation in 1850, Alcatraz was originally garrisoned in 1859; the island's troops and more than one hundred cannons were intended to defend the gold-rich San Francisco harbor.

Like other military installations, Fortress Alcatraz was used for detention and punishment. Over time, the prison facility on Alcatraz expanded to four cellblocks and was used to confine men for numerous reasons. While most prisoners held on Alcatraz were U.S. military personnel, there were a few notable exceptions. Between the Civil War-era Southern sympathizers/supporters and the World War I-era conscientious objectors, the U.S. government detained a number of Indians on the island.

Nineteen members of the Hopi Tribe, called "Hostiles" by government agents, made up the largest group of Indian prisoners to be confined on Alcatraz. Their crimes were unique in the 140-year history of incarceration on the Rock: they wouldn't farm in the ways the federal government instructed them, and they opposed the forced removal and education of their children in government boarding schools. Both "offenses" were part of widespread Indian resistance to U.S. policies designed to erase each tribe's language and religion. These federal policies, which had gone on for years, met with little success. As General Nelson A. Miles once wrote to his wife, "There has been no branch of the government so corrupt and disgraceful to the Republic as that which has had the management of our Indian affairs."

From Arizona to Alcatraz

In an effort to weaken Hopi family and clan relations and traditional social structure, the government attempted to move the people off their northern Arizona mesas onto individual allotments of land. In conjunction with this, the Hopis were also ordered to turn over their children--some as young as five years old--to government authorities; the children were then taken to boarding schools many miles from home. Reports of the children being beaten for speaking their native language, practicing their religion, and other such infractions of boarding-school rules were common. Both bribery and military force were used and were met with passive resistance on the part of the Hopis.

In response to a petition to discontinue the allotment policy, acting Indian Agent First Lieutenant S. H. Plummer wrote to Washington that, "Owing to the shifting nature of their planting grounds, it would be almost impossible to maintain any allotment to individuals... The best interests of the tribe would be promoted by granting the petition [to end allotment]." Despite this recommendation, nineteen men designated as ringleaders of the "Hostiles" by the government were taken into custody by the U.S. Army on November 25, 1894.

Traveling by foot, horse, train, and boat, the Hopi men arrived in San Francisco more than a month later. The terms of their confinement on Alcatraz dictated that they were to be "held in confinement, at hard labor, until ... they shall show ... they fully realize the error of their evil ways ... [and] until they shall evince, in an unmistakable manner, a desire to cease interference with the plans of the government for the civilization and education of its Indian wards." The men remained on the Rock from January 3 to August 7, 1895.

They were confined in the Lower Prison. Earlier, in 1890, one of the post surgeons wrote that this structure was "totally unequal to fulfill its legitimate purpose." Sanitation was deplorable, there was insufficient ventilation, and the building was considered a firetrap. The Call, a San Francisco newspaper, reported on the Hopis' arrival and activities. Saying that the Hopis were "rudely snatched from the bosom of their families and are prisoners ... until they have learned to appreciate the advantage of education," the article went on to say that field trips to local schools were meant to impress the prisoners "so that they can see the harmlessness of the multiplication table.... They rise early, breakfast, go to work, if the weather is fine, eat their dinner at noon and then work all afternoon." Rumors of deaths of some of the men were dispelled when pictures taken by San Francisco photographer I. W. Taber were sent to a Mennonite missionary, H. R. Voth (who was living on the Hopi Reservation and recorded the arrests using one of the first handheld cameras). Hardships were suffered by family members as well; wives of two of the prisoners gave birth to children who died during their fathers' incarceration.

Return to their homeland

After almost seven months on the cold and damp island, far from their high desert pueblos, the nineteen men were returned to Hopi land. Undoubtedly desperate to go home, the men had finally capitulated. But Indian agency and military reports clearly indicate that the people of the Hopi maintained their resistance to Washington's policies. Today, the Hopi Tribe continues to work to preserve traditional ways and culture. Their Cultural Preservation Office closely monitors issues and activities related to the Hopi people. On Alcatraz, the National Park Service works to make known the stories of the many individuals and cultures associated with the island's history. 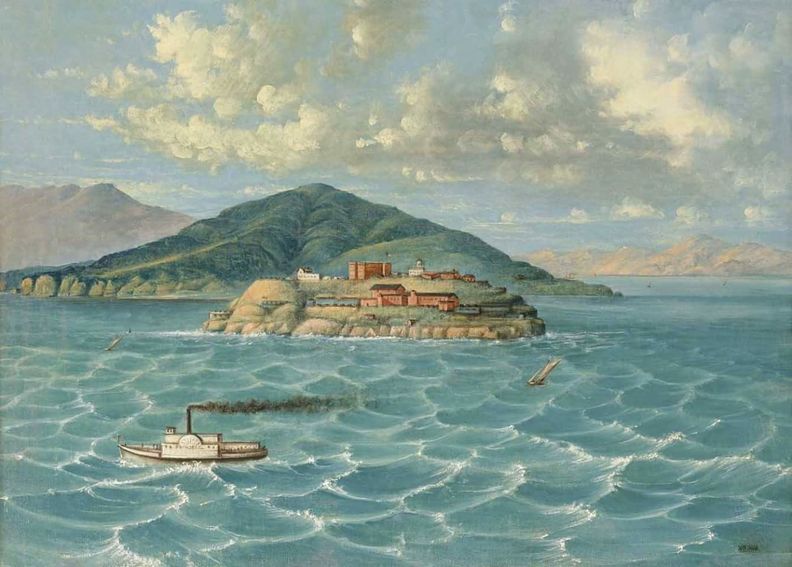 Early oil painting of Alcatraz as a military prison.