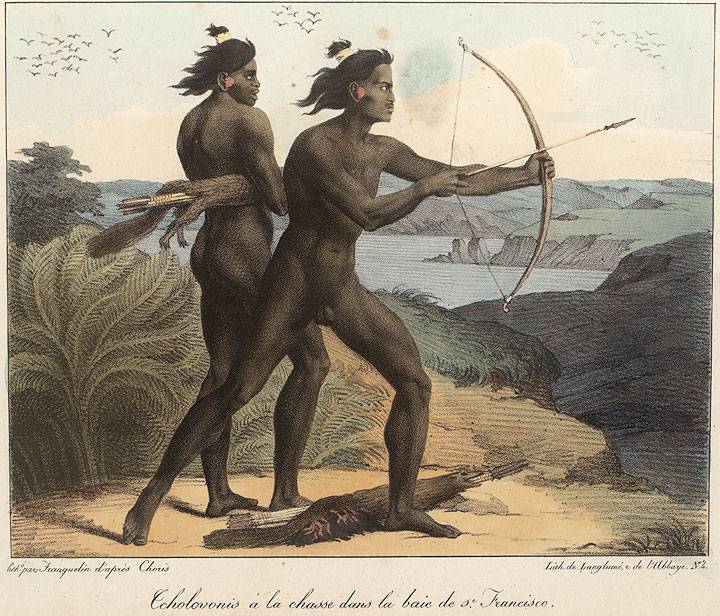 Painting by Louis Choris of local inhabitants when the Spanish arrived, probably some of the people known as the Ohlone.

Before the coming of the Spaniards, Central California had the densest Indian population anywhere north of Mexico. Over 10,000 people lived in the coastal area between Point Sur and the San Francisco Bay. These people belonged to about forty different groups, each with its own territory and its own chief. Among them they spoke eight to twelve different languages--languages that were closely related but still so distinct that oftentimes people living twenty miles apart could hardly understand each other. The average size of a group (or tribelet, as it is often called) was only about 250 people. Each language had an average of no more than 1,000 speakers.

That so many independent groups of people speaking so many different languages could be packed into such a relatively small area boggled the European mind. The Spanish sometimes referred to them as Costeos--people of the coast. This word was later picked up by English-speaking settlers who mispronounced it Costanos, and finally twisted it into Costanoan. In this way the Indians of the Monterey and San Francisco Bay areas became amalgamated into a single large tribe called by the ungainly name, Costanoan. But the name was never adopted by the Indians themselves, each of whom had a name for his or her own group. In fact, the descendants of the Bay Area Indians dislike the name quite intensely. They generally prefer to be called Ohlones, even though Ohlone is a word of disputed origin: it may have been the name of a prominent village along the San Mateo coast, or perhaps it was a Miwok word meaning "western people." In any case, Ohlone has a pleasing sound to the descendants of the Bay Area Indians, and consequently that is the name that will be used.

But like Costanoan, Ohlone is still a fabrication. There was no Costanoan or Ohlone tribe in the sense that there was a Sioux, Navajo, or Hopi tribe. One small Bay Area tribelet would have been loosely affiliated with its neighbors by bonds of trade and marriage, but there was never anything approaching a larger tribal organization, or even an Ohlone confederation. The Calendaruc tribelet who lived near present-day Watsonville, for example, did not feel that they were in any way allied to the Huchuin who lived near present-day Oakland--and indeed the two groups probably knew of each other's existence only second hand if at all. True, the people between Point Sur and the San Francisco Bay spoke languages that had a common root, and (to us) their customs appear broadly similar. But in their own minds they were not a nation, not even a "culture." They were only forty or so independent tribelets, each with its own territory and its own ways of doing things, each working through its own destiny. In short, Ohlone was not an ancient entity; it is merely a fiction that we have invented to deal with a human situation far more complex and far richer than anything our own politically and culturally simplified world has prepared us for.

The Ohlones depended upon animals for food and skins. As hunters they had an intense interest in animals and an intimate knowledge of their behavior. A large part of a man's life was spent learning the ways of animals.

But their intimate knowledge of animals did not lead to conquest, nor did their familiarity breed contempt. The Ohlones lived in a world where people were few and animals were many, where the bow and arrow were the height of technology, where a deer who was not approached in the proper manner could easily escape and a bear might conceivably attack--indeed, they lived in a world where the animal kingdom had not yet fallen under the domination of the human race and where (how difficult it is for us to fully grasp the implications of this!) people did not yet see themselves as the undisputed lords of all creation. The Ohlones, like hunting people everywhere, worshipped animal spirits as gods, imitated animal motions in their dances, sought animal powers in their dreams, and even saw themselves as belonging to clans with animals as their ancestors. The powerful, graceful animal life of the Bay not only filled their world, but filled their minds as well.

Map of shellmounds around the Bay. (Shellmounds were created adjacent to eating areas of Ohlone tribal groupings where they discarded shellfish over a period of many years.)

Excerpted with permission from The Ohlone Way: 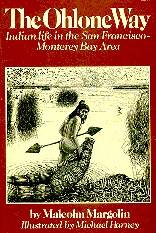