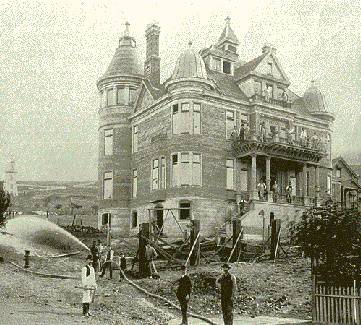 "Nobby" Clarke's Folly, under construction in the 1870s.

An Irish policeman with a very colorful reputation owned the mansion, now an historic landmark, called "Nobby" Clarke's Folly at the corner of Douglass and Caselli Streets in Eureka Valley. Contentious and litigious with flashes of brilliance and community conscience, Clarke was the San Francisco Police Department's version of 'Emperor Norton', the eccentric dictator who ruled downtown streets benevolently in the 1860s and 70s. "Nobby" was both the pride and bane of the Police Force.

Answering the call for gold, Alfred Clarke arrived from Ireland in 1850 aboard the ship "Commonwealth." After an unrewarding attempt in the gold hills of Nevada County, Clarke returned to the city docks and landed a job as stevedore. Restless to do better, he connected himself with the Clerk of the Board of Supervisors and by 1856 was a patrolman on the San Francisco Police Force. On his waterfront beat, he had an altercation with a seaman who bit his hand so badly he never recovered full use of it. Likely, his nickname " Nobby" came from that injury. Clarke moved up the ladder until he was clerk to the Chief of Police. He made an expanded use of that position by running a side business lending money to patrolmen. Soon he was making more money than the Chief and that revelation likely figured in his removal from the Force for the next three years. "Nobby" used that time to his advantage. He studied law and passed the bar. When he returned to the Police Department in 1870, he was chief legal advisor to the department and its Chief.

It was "Nobby" Clarke, the attorney, who introduced "Emperor Norton"-style splashes of excitement, amusement and vexation to the courts of San Francisco. Apparently courtrooms held such an attraction to Clarke, he could hardly stay away from appearing there daily. He filed many, some say, too many cases mostly against the Police Commission or about the Department itself. While his legal demeanor was over zealous, at times he seemed genuinely concerned about his former fellow officers. In 1896 he aimed a suit directly at the Police Commissioners who had discharged 50 patrolmen in 1894. He asked for compensation of $40,000 for each while characterizing the Commissioners as persons with evil eyes, depraved minds and abandoned hearts. Clarke wasn't entirely "off the wall" on this case, in view of the deep depression and rampant unemployment in 1894.

"Nobby" was clearly contentious and maybe a bit proud. After he built, or over built, his mansion in the Gilded Age, he and his upslope neighbor, Behrend Joost, began a feud that lasted their lifetime. While the frequently given reason for the daily warfare was the Mountain Spring Water Company service Joost owned and provided to Clarke and others in Eureka Valley, it is probable these two "rags to riches" businessmen were destined to compete about anything and everything. By then it was their nature to achieve by outdoing everyone else. Their stormy relationship didn't stop with sharp words; neighbors still recount stories of their fist fights on 18th Street.

There was another side to Clarke's character. A soft side that showed sensitive concern for others. He and his first wife were founding members of the Calvary Presbyterian Church with Clarke serving as its Deacon. "Nobby" organized the Widows and Orphans Aid Association of the Police Department and was its president several times. He was involved with other charitable organizations, and "Nobby" was always ready to go to court defending those who were overlooked or ill-used by the system.

Eventually, Clarke himself was chewed up by the system. He became involved with a J.F. Turner, who forced him into bankruptcy. "Nobby" lost his beautiful place in Eureka Valley and moved to 1208 Masonic Avenue where he died of heart problems in 1902. He was 69. Even in his obituaries, the two different sides of Clarke's character emerged. The Examiner portrayed "Nobby" with a gnarled, contentious personality and an uncouth physique in his later years. The Chronicle painted Clarke as short, with a tufted beard and broad shoulders. He was a mild-mannered man who died friendless. The truth is probably some of both.

Today "Nobby" Clarke's Folly is an imposing reminder of the Irish gold rushers who came to San Francisco carrying baggage that consisted mostly of courage, nerve, and high spirits. Clarke's magnificent mansion that withstood the 1906 earthquake, is testimony of his determination to succeed. To San Francisco residents and tourists, "Nobby" Clarke's house adds an unexpected but welcome grandeur to an otherwise unpretentious country neighborhood where San Francisco's other "Emperor Norton" presided in the Gay Nineties.

Mae Silver wrote neighborhood history during the 1990s before moving back to New Jersey, her state of origin. Old Corbett Road, a biography of a street, and Rancho San Miguel, a history tracing one-sixth of San Francisco's land from rancho to present day neighborhoods, are both out of print.