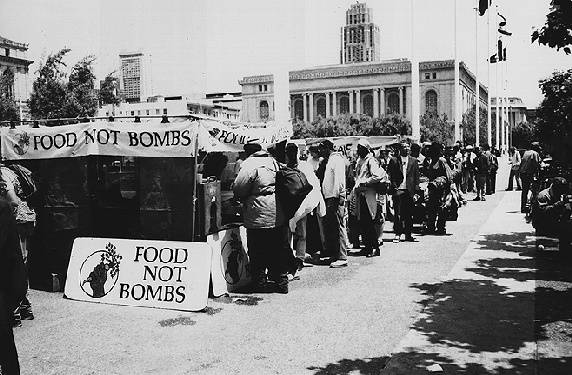 According to FNB's spokespeople, the repression of FNB is part of the general assault on the rights of the homeless. In FNB's ideology, no difference exists between the activists and the people they serve. In truth, there is a good deal of overlap between what many oddly call the "homeless community" and the group as a whole. Many homeless people find roles in the group as mechanics, cooks, or just couch-surfers. Food Not Bombs is resolutely inclusive. But this open endedness exacts a price. The psychoses of street-life seriously hamper the organizations ability to function. Theft, sexual harassment and drug abuse are common crises; and crisis itself is FNB's normal mode. Its endless meetings are dominated by private demons; adherence to consensus not only tolerates but encourages dissolute raving in the name of democracy, exacerbating the tendency to forego tactical debate for group therapy.

In publicly opposing Matrix, FNB became "champions" of the homeless; even a lot of the homeless saw them that way ("those saint-like men [sic]" as one homeless poet put it in Street Sheet). Without intending to-- in fact, deliberately trying not to-- FNB replicates the same processes of manipulation and passivity as any other charity, even if in a harmless way. However laudable the intention of helping the poor, symbolic acts are usually more meaningful to the giver than the recipient. At worst, it can lull highly dedicated young people into a false sense of "doing something." It isn't really an accomplishment to attract a crowd of poor folks with give-aways; and by that measure, FNB is notoriously unreliable.

Food Not Bombs - Publisher or Photographer