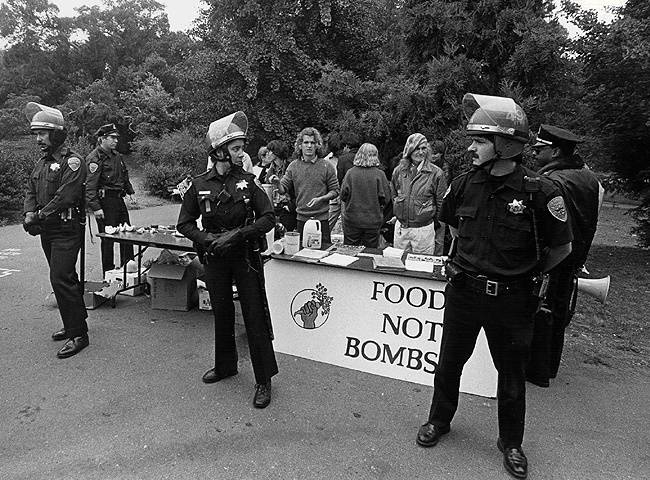 San Francisco's finest protecting (?) citizens from Food Not Bombs. Or is it the other way around?

Even though Matrix (a Mayor Jordan anti-homeless crackdown campaign in 1994-95, ostensibly ended by Mayor Brown in 1996) was waged in the name of the city's small business owners, Food Not Bombs' material existence is supported by an important sector of small business--natural foods retailers. FNB depends on them for donations of unsalable food. However, this source of raw materials is highly unreliable. Bakeries usually have an abundance of unsold product, but non-perished produce is hard to come by. Typically, donations come in the form of twenty boxes of zucchinis, of which maybe half aren't rotting. The difference is made up by FNB's cooks who purchase commodity-food with their own cash or food stamps. Nonetheless, an important component of FNB's ideology is support for small organic foods businesses.

FNB propaganda makes a virtue out of necessity, claiming that they feed the hungry solely with leftovers (though they don't call it that). According to the book Food Not Bombs, which has been instrumental in inaugurating dozens of FNB chapters across the country, surplus food goes to waste because of the greed of corporate monopolies which induce an artificial scarcity. There is an important truth here; however, small-scale retail cooperatives exist no less than highly centralized corporations within a social context organized by the imperatives of capital accumulation. Co-ops that came into existence during the 1960s and 70s have either gone bankrupt or have adapted to the laws of the market and upscaled themselves into specialty boutiques that hire security guards to keep panhandlers away from their storefronts. There is simply no correlation between the cooperative structure of a business and social altruism. Actually, the most generous donators are highly exploitative stores that run a profit. They relate to FNB with the pecuniary parsimony of the petit bourgeois--as if FNB were a free garbage disposal service. The smaller cooperatives run at a loss and the workers, who barely earn a subsistence wage, scavenge for themselves any edible unsolds before giving them away.

So while it is true that massive amounts of food goes to waste that could otherwise be salvaged -- Safeway, for instance, pours bleach in its dumpsters and locks them up to keep out dumpster divers-- there is simply not enough food in the dumpsters to feed the impoverished masses (leaving aside its indignity). The problem of hunger in the United States--like that of homelessness--is not reducible to distribution of the surplus; it is a logical consequence of the profit system itself. Food that cannot be sold at a profit is a loss for the capitalist, whether large-scale or small. The real surplus that capitalism generates is in labor, that is, in people who are unable to sell themselves to the rich and thus can't purchase the means of survival. The homeless, as Peter Marcuse put it, are "the surplus of the surplus."