from the introduction to Bad Attitude, the Processed World Anthology (1990: Verso, London) 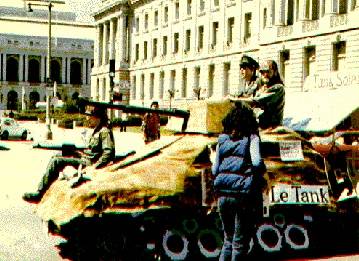 The Union of Concerned Commies began in early 1979 as a left-libertarian intervention into the anti-nuke movement, then at the height of its strength and militancy. This intervention involved a serious attempt to present radical critique with attention-grabbing style and innovative use of media. For instance, the same cartoon graphics (usually by Jay Kinney and Paul Mavrides of Anarchy Comix) appeared on leaflets, posters, and T-shirts distributed at antinuke events. Some of the UCCers settled in for a sustained effort within the movement, mostly through the Abalone Alliance newspaper It's About Times.

Others, with lower tolerance for the somewhat sanctimonious neohippie antinuker culture, looked around for more exciting terrain. A glimpse of such terrain was provided by San Francisco's notorious White Night Riot of May 21, 1979. That night, an angry crowd of gay men and women, quickly joined by hundreds of young workers and marginals, attacked San Francisco City Hall and the police following the announcement of a slap-on-the-wrist sentence for macho former cop and former supervisor Dan White, convicted killer of Mayor George Moscone and gay supervisor Harvey Milk. Several UCCers participated in the events, and immediately afterward mass-produced a T-shirt (designed by Paul Mavrides) showing a burning cop car, the date and place of the riot, and the words "No Apologies."

Unfortunately, White Night led nowhere, the spontaneous community of the riot dissolving as quickly as it had formed. But the UCC soon enough found itself a new field of action. The seizure of U.S. hostages by the Iranians and the Soviet invasion of Afghanistan provided the Cold Warrior fundamentalists with the pretext they had been looking for. An atmosphere of militaristic and patriotic hysteria engulfed the country. At a glum UCC meeting convened to discuss the situation, Chris Carlsson proposed that the group "put on army uniforms, go out on (San Francisco's) Market Street and declare war." 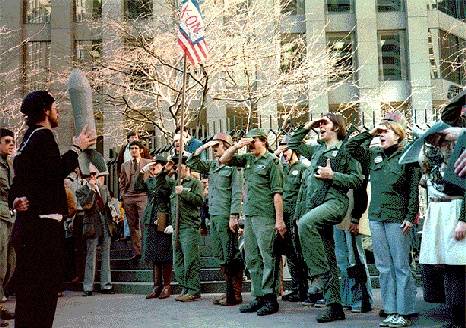 Thus began the street theater phase of the UCC. The declaration of war--backed up with a list of typical wartime measures like rationing, curfew, suspension of the right to strike and censorship --evolved into a full-fledged satirical revue, complete with reworded versions of the Marines' Hymn and "Over There," skits about the political-economic function of war and the militarization of daily life and lots of marching about and shouting ironic slogans like "One, two three, four! We can't wait to go to war!" In fact, much of the group's satirical bite was directed against the Leninist and social-democratic leftists and their own complicity in capital's authoritarianism and work fetishism. This made the group as unpopular with the apparatchiks of the left as it was popular with the "unorganized" and generally bored stiff audiences at anti-draft and antinuke rallies. It was the most fun any of us had had doing agitational politics.

Alas, the strains of unpaid political performance work, insufficient rehearsal time and an escalating conflict over "amateurism" versus "professionalism" tore the group apart within a few months. (It is difficult to gauge the role of the disintegrating social-political culture, and its diminishing possibilities for intervention, in the demise of the UCC, though it surely played its part.) But well before the breakup, the spirit that had animated the UCC was finding a new home. Before Processed World was even thought of, Carlsson and partner Caitlin Manning produced a leaflet for National Secretaries Day in April 1980 called Innervoice #1 (under the name "Nasty Secretaries Liberation Front"). The leaflet foreshadowed the PW style. One side was a mock invoice listing the prices paid by an average office worker for her unhappy life. The other was a short analytical essay called "Rebellion Behind The Typewriter." It referred pointedly to the collective power of information handlers to subvert the circulation of capital.

A year later, in April 1981, the first Processed World hit the streets, Carlsson and Manning having been joined by ex-UCCers Adam Cornford and Christopher Winks (and Steve Stallone as pre-press consultant and printer) in producing that first issue.