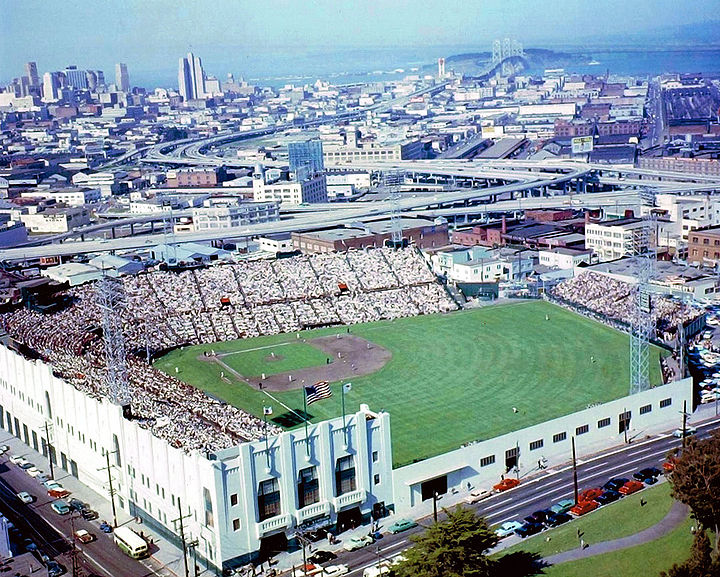 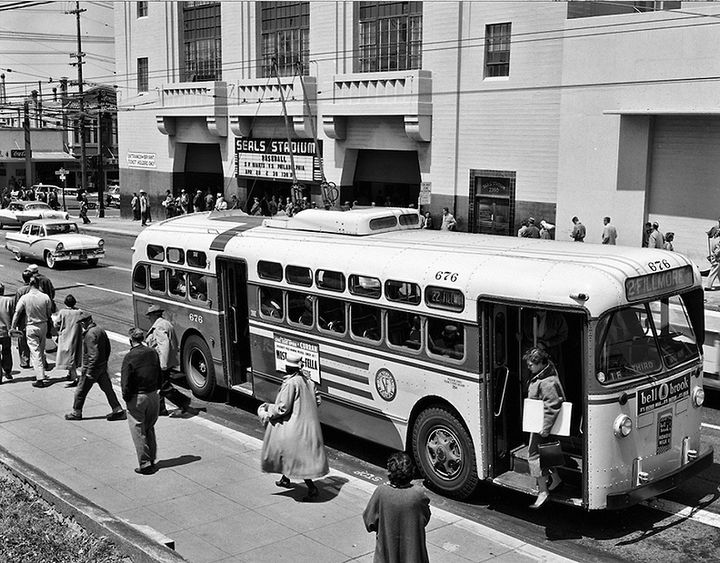 Seals Stadium, April 29, 1958, with the 22-Fillmore bus bringing fans to see the Giants in the first month in San Francisco. 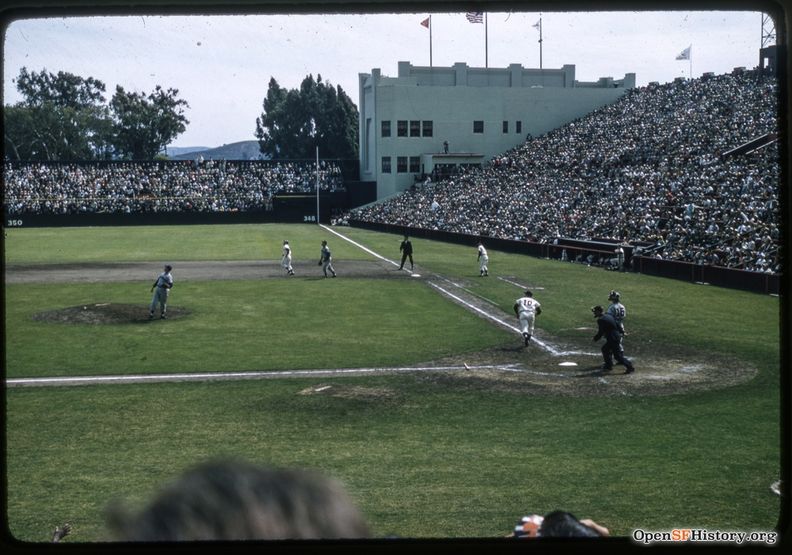 Ray Jablonsky gets a hit with Willie Mays on first base, Seals Stadium, June 1958. 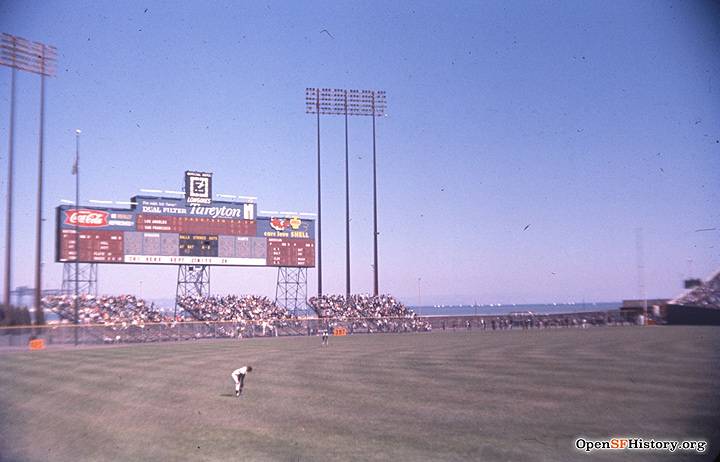 Baseball in Candlestick Park's first year, 1960, when the outfield was still open to the bay. 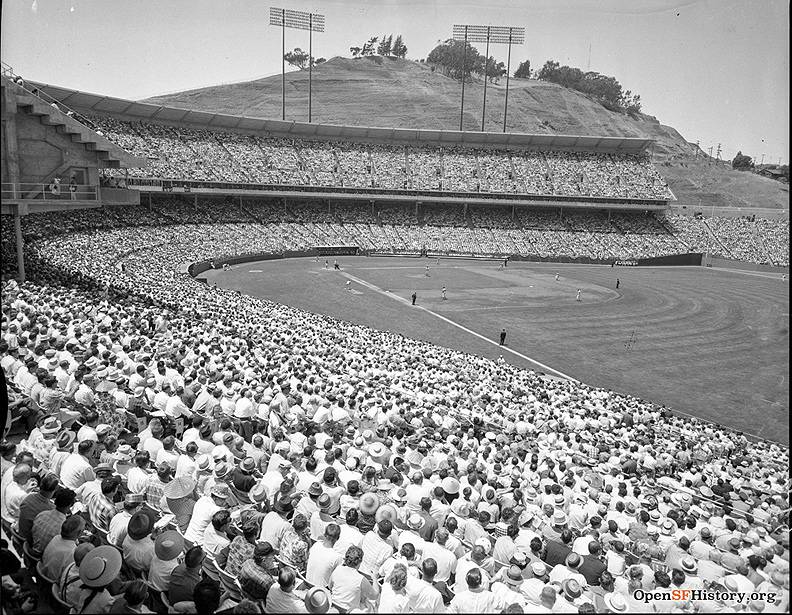 Candlestick Park 1960, first season of Giants baseball at the new stadium, described as "the best stadium ever built for baseball." 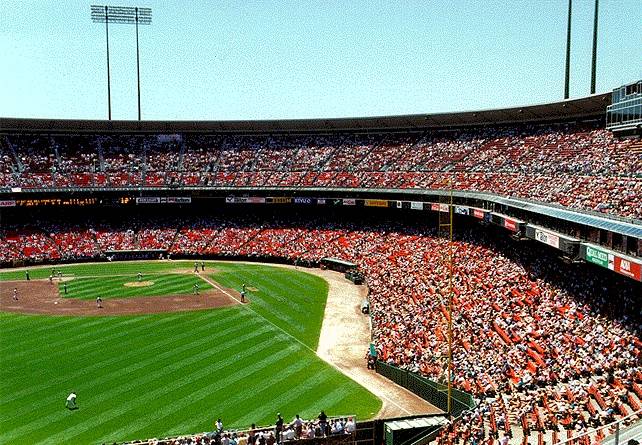 The Giants at Candlestick Park 1993

April 15, 1958-- First game of the San Francisco Giants, played in Seals Stadium. Giants beat the Los Angeles Dodgers 8 to 0. San Francisco embraced its new major league team. Lon Simmons, then a first-year announcer, describes the city's transformation: "On the street, at the opera, people would have plugs from transistor radios in their ears, listening to the games... Women would go into the supermarket and ask what the Giants' score was." For the first two years the Giants played at Seals Stadium, seating just under 22,000 at full capacity. 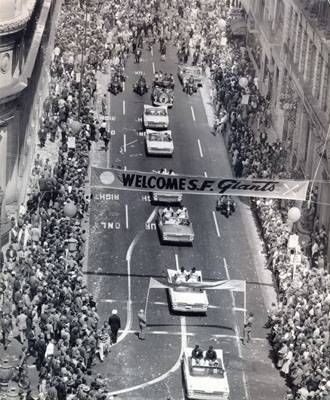 San Francisco welcomes the Giants with a tickertape parade on Montgomery Street in 1958.

That first year in San Francisco, the Giants started four rookies: Orlanda Cepeda (the "baby bull") at first base, Jimmy Davenport at 3rd base, Bob Schmidt at catcher, and Willie Kirkland in right field. Willie Mays, already established as one of the greatest players of all time, was less happy with the move to San Francisco. Not only did the fans expect him to prove himself anew, but his initial attempt to buy a home in the posh St. Francis Wood neighborhood met with racist restrictions. Orlando Cepeda won the Rookie of the Year award for 1958, and was voted Most Valuable Giant by the local fans: "I loved San Francisco. I lived in the city, I went out to night clubs. Herb Caen called me the 'Cha-cha Kid.'" (source: "A Giant Success," by Glenn Dickey, San Francisco Chronicle, April 2, 1997)

1959--Giants lead the league with eight games remaining, but are swept by Dodgers at Seals Stadium, then lose four of the next five games. Rookie Willie McCovey joins team in July and in his first game hits 4 for 4 against Robin Roberts. 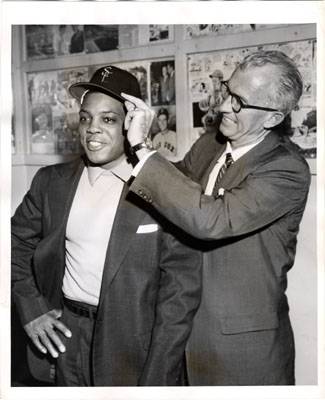 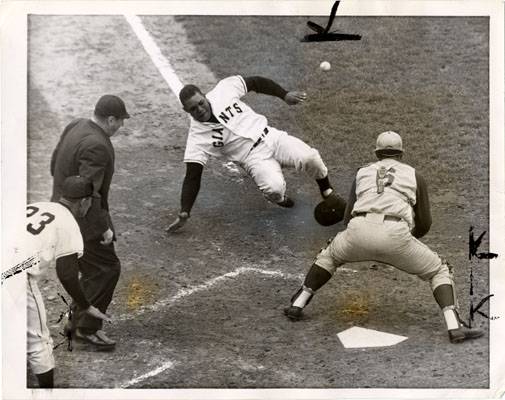 Willie Mays slides into home against Ed Bailey of the Cincinnati Reds in a 1960 game.

1960--Opening day in the new home of the Giants, Candlestick Park. Former San Francisco Seals' manager Lefty O'Doul calls the park" ...the most ridiculous site for a ball park I've ever seen. When I was a child, the wind would blow the sheep I was herding off Candlestick Hill." The park proves to have the worst weather of any major league stadium.

1962--The Giants win the pennant but lose the World Series to the New York Yankees in seven games. In the final game with the Giants trailing 1-0 and runners on second and third with two outs, Willie McCovey lines sharply to second baseman Bobby Richardson, ending the game. 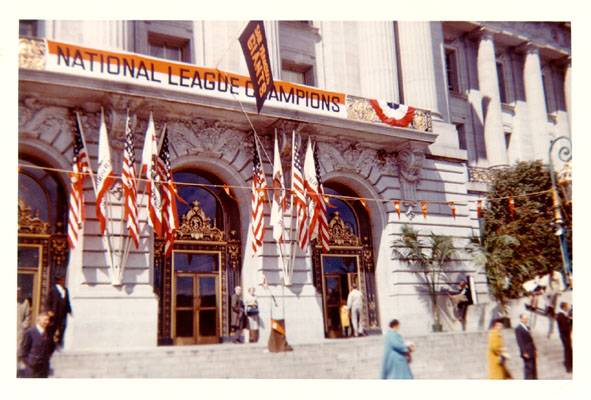 City Hall is decorated to honor the Giants' National League Championship in 1962.

1971--The San Francisco Giants win the National League West on the last day of the season as Juan Marichal beats the Padres 5-1, edging out the Dodgers by one game. 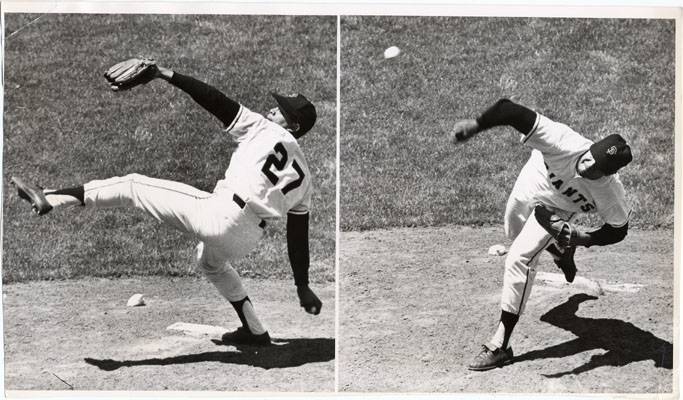 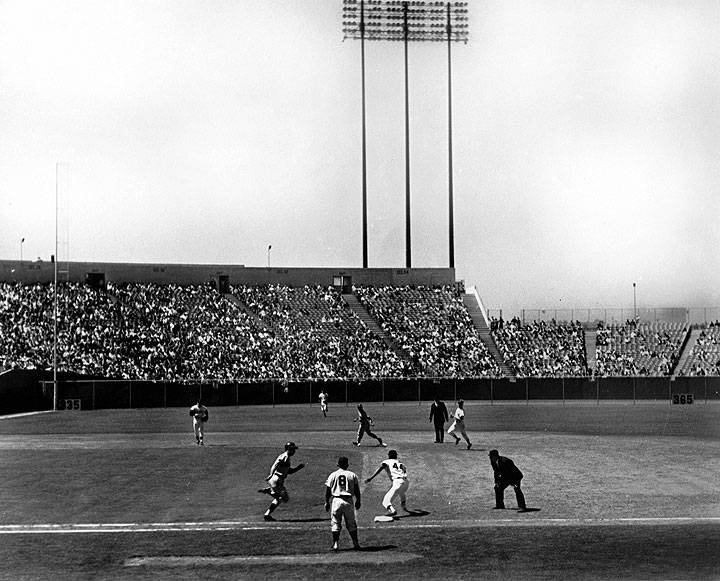 Willie McCovey makes the play at 1st base in this 1965 game at Candlestick.

1975--The Giants are almost sold to Toronto, until Bob Lurie buys the team and keeps it in San Francisco.

1978--The Giants are in first place in August but finish third, with players such as Jack Clark, Darrell Evans, Bill Madlock and Vida Blue.

1981--Frank Robinson becomes the first black manager in the National League, taking over the reins of the San Francisco Giants.

1986--Roger Craig, former Mets pitcher, and former pitching coach of the World Champion Detroit Tigers, takes over as manager of Giants. Will Clark plays in his first major league game, hitting a home run off Nolan Ryan in his first at bat. Second baseman Robbie Thompson is Rookie of the Year.

1987--Giants win the National League West with several important players acquired in mid-season trades. They lose to the Cardinals in the playoffs.

1989--The San Francisco Giants advance to the World Series against their across-the-bay rivals the Oakland Athletics, in the first ever Bay Area World Series. Moments before Game 3, the Loma Prieta earthquake rocks the area and the series is suspended for 10 days. When finally resumed, the series becomes anticlimactic to the natural disaster. The Giants lose all four games to the Athletics. A bond issue to build a new stadium is defeated after the earthquake.

1992--The Giants are sold to St. Petersburg, Florida, but at the last minute, before the deal can go through, a San Francisco coalition buys the team, keeping it in San Francisco. Barry Bonds is purchased as a free-agent for the 1993 season.

1993--Free-agent Barry Bonds and new manager Dusty Baker along with Will Clark, Robbie Thompson, Matt Williams, and pitchers John Burkett, Bill Swift and stopper Rod Beck lead the Giants to one of their best seasons ever, going into the final game of the season tied with Atlanta, each with records of 103-58. The Giants lose the final game to their old nemesis, the Dodgers.

1994--Matt Williams has 43 home runs in August when a strike ends baseball for the rest of the year.

1999 -- The Giants' last season at Candlestick Park. The following seasons are played at newly-opened Pacific Bell (now AT&T) Park, which should have been named "Willie Mays Field."