¡Junta No! Chilean Solidarity in the Bay 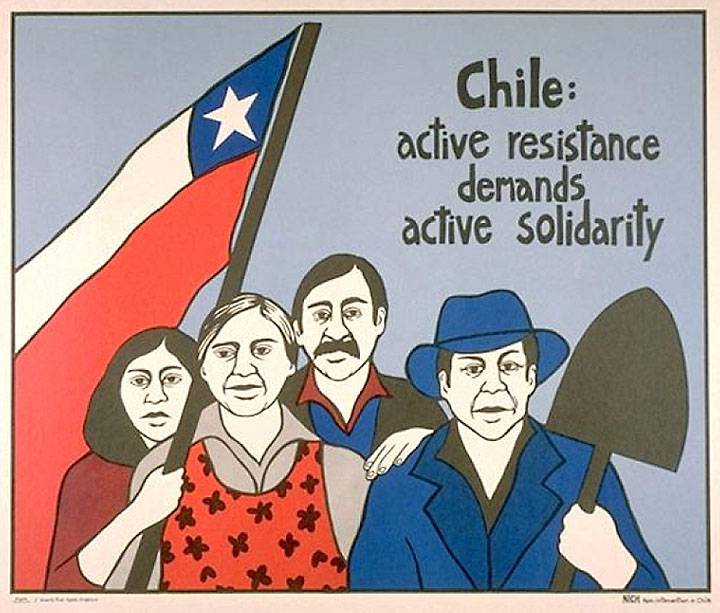 Bay Area solidarity with the Chilean Left preceded the anti-Pinochet Dictatorship movement. As early as 1972, Non-Intervention in Chile (NICH) demonstrated North American support for the democratically elected socialist, Salvador Allende. Supporters felt immense pride in the Allende government as a democratic victory of the Left in a global political climate in which the Right was gaining traction and crushing the idealistic visions of the 1960s. In 1973, the Bay Area’s connection to Chile changed from celebration of a revered Leftist government to a fierce struggle against a militant oppressor.

A military coup on September 11, 1973 forcibly installed Augusto Pinochet as dictator of Chile. Backed by the U.S. government, the regime change established a military government in Chile. Almost immediately, the military Junta carried out the detainment, torture, exile, and extrajudicial killings of Chilean leftists, artists, and intellectuals who were identified as political insurgents. In the words of Sola Sierra, former president of the Association of the Families Detained-Disappeared, “It wasn’t war, it was extermination.”(1) After the coup, the first wave of Chilean political exiles sought refuge in the Bay Area. They created and engaged with existent political organizations to support their livelihoods, protest the military dictatorship, and support the resistance movement within Chile.

The year the exiles arrived (1975), Chileans, Argentines, South Americans, Central Americans, and North Americans created the cultural center La Peña in South Berkeley. The “Peña,” traditionally a Chilean meeting place for socially conscious conversation and culture, became a space for the Bay Area Solidarity movement to flourish. Quique Cruz recounted in 1990, “It is said also that it is the home of the Chilean exiles.”(2) Casa Chile served as a political arm of the movement and of La Peña, where it housed its office. The South Berkeley neighborhood, home to the Irish Revolutionary Army-affiliated Starry Plough next door and a Black Panthers office around the corner, was a hub of 1970s Berkeley political radicalism.(3)

“Chileans brought their factionalism with them”(4) —Nina Serrano

Labels like ‘Radical’ and ‘Leftist’ did not encompass the broad range of politics within the Solidarity Movement, and to paint the movement as politically unified would grossly oversimplify Chilean politics. Among Chilean leftists and North American allies, ideologies fell generally between the Unidad Popular, made up of mostly former Allende-supporters, and the MIR (Movimiento de Izquierda Revolucionaria, the Revolutionary Left Movement). Nina Serrano, a committed activist, writer, and media producer in the solidarity movement notes that “Fernando Alegría, a La Peña founder and lifelong supporter, had been an official Unidad Popular representative at the Chilean Embassy in Washington D.C. before the coup and was a close friend of Allende’s. All of the original founders supported the Unidad Popular.”(5) More critical of the Allende government were supporters and members of the MIR (Miristas), a leftist group whose tactics to overthrow the military regime included armed struggle. Ellen Moore of Grupo Raíz, known as La Peña’s house band, recounts, “I wore the camiseta of La Peña which, de facto, was the camiseta of the MIR.”(6)

Paula Tejeda witnessed the coup in Chile in 1973, lived the Peña days at the peak of its cultural activity in the ’80s, and now owns Chile Lindo empanada shop in San Francisco. She explains the evolution of the movement’s political affiliation:

“The original founders of La Peña were not members of the MIR. They came together and said we need to do something about the Dictatorship, and they organized. And they created an environment so that people who were from Chile had a support system here. And a lot of them were also artists, intellectuals, poets, and musicians. What happened was that when the MIR came in — you have one group functioning on one level, and another one comes in. And they’re like ‘thank you very much, but we’re here now and we’re the ones that call the shots.’ That transition wasn’t exactly very .. how can I say it? It was the kind of thing that you experience when control issues come into play. And because el MIR was an organized faction of a political branch, once they came in they basically took over from there. And I think that kind of made things a little sensitive with those who were working to make it all possible up to that point.”(7)

Affiliation in this movement carried heavy implications inside Chile — identifying as a leftist (MIR, Unidad Popular, or otherwise) put one’s life in serious danger. Given the U.S. government’s installation of the military and the widespread fear of the Dictatorship, political affiliations carried heavy weight in the Bay Area as well. Party affiliations of the movement remain contentious today. Notwithstanding the tension between factions in the Bay Area’s Chilean Left, maintaining separate groups did not overtake the common struggle. The politics and livelihoods of Chileans were under violent attack by the Pinochet Dictatorship, which was of utmost importance to both Miristas and Unidad Popular supporters.

As the ’70s continued and the Pinochet regime accelerated its torture and murder efforts, the Bay Area Solidarity movement flourished and responded with public outreach, direct action protests, and fundraisers to support the resistance in Chile. Local churches played major support roles in maintaining the solidarity movement throughout the 1970s and 1980s. The Council of Churches served as a network for Chilean political refugees and solidarity groups in the Bay Area.(8) Father Moriarty of San Jose is remembered fondly by those involved in the movement as providing social services and support for his mostly Chilean congregation with the Chilean Refugee Support Committee.(9)

In June 1974, Chileans and North American allies joined forces with the International Longshore and Warehouse Union (ILWU) in direct action protest. La Esmeralda, a Chilean Navy tall ship on tour and known to be used for torture under Pinochet, was set to dock in the Oakland Naval Yard on June 21st. Nina Serrano remembers the protest:

“There was a beautiful, tall, historic Chilean naval ship called La Esmeralda. Each year the U.S. would invite such ships to different U.S. ports. But through the international solidarity movement, we knew that the Esmeralda was used as a torture site for political prisoners. So we organized a protest against it. That included the International Longshoremen’s and Warehousemen’s Union who were very militant, and they were great supporters of us during all of the solidarity work. It wasn’t just the churches, it was also the unions, especially the ILWU. And so the ILWU members refused to unload cargo while the Esmeralda was docked and they closed down the port because of the Esmeralda. And of course all of the U.S. State Department propaganda that appeared in the newspapers was about how beautiful the ship was, with no mention that it was where people were taken to be tortured.”(10)

Activists forced their message into the public’s eye by hanging a “Junta No!” banner from the Golden Gate Bridge.(11) Remembering the spectacle of mass solidarity on the Bay, Nina recalls, “There were also people with boats who came. And they organized with their sailboats and had banners and signs and balloons. That was a marvelous moment when the land and the water were full of strong, colorful protest.” 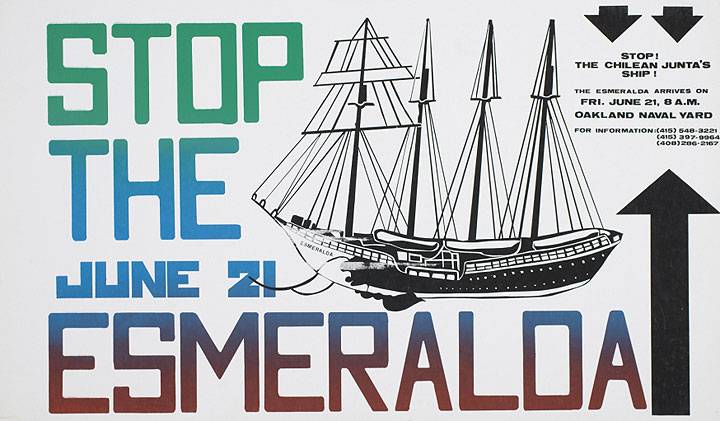 “Arts was our media” —Paula Tejeda

Posters like the Esmeralda dock protest example above brought color and public awareness to the Chilean solidarity struggle. The arts were absolutely central to the Chilean movement, and acted simultaneously as cultural expression and a media outlet. Because resistance to the Pinochet Dictatorship was shut out of the mainstream media due to U.S. involvement in the coup, Chileans and allies spread the message of the atrocities within Chile and asserted their opposition through song, theater, and visual arts. Rene Castro is a Chilean exile forced to settle in the Bay Area in 1975 after two years in Chilean concentration camps.(12) He is admired as an artist committed to the solidarity movement with Chile and many other struggles of Latin America. A selection of his artwork at Mission Grafica at the Mission Cultural Center is pictured (Posters by Rene Castro, Mission Grafica at Mission Cultural Center for Latino Arts, SF): 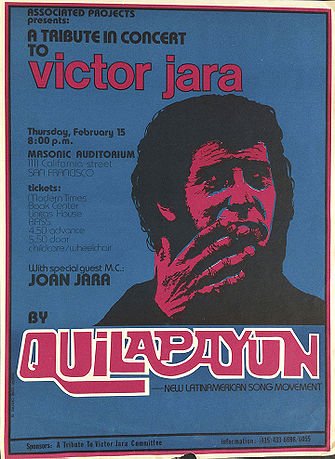 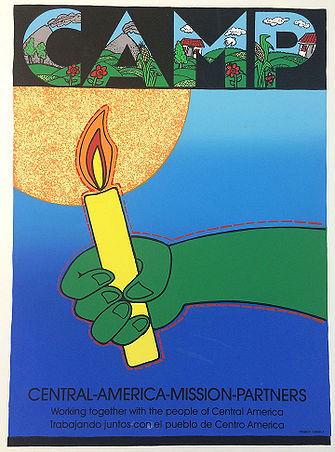 A celebration of Chilean culture in the Mission to commemorate the Allende government and Pablo Neruda’s poetry took place on October 4, 1973 — just a month after the Pinochet coup. 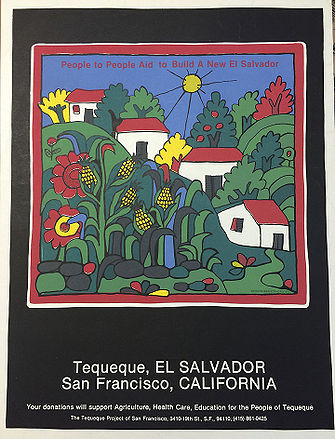 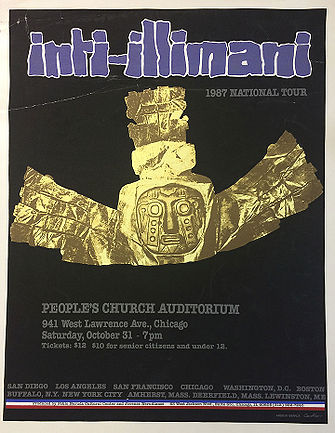 “We wanted to reflect Chile’s cultural roots to push back against cultural imperialism.” —Ellen Moore

Photo of Grupo Raíz from HollyNear.com
Music was the life and sustenance of the solidarity movement, bringing Chileans and allies together to celebrate Chilean culture and resist the Dictatorship. El Grupo Raíz, the “house band” at La Peña formed itself in Berkeley in 1980 after group members’ experiences of imprisonment in Chile in the ’70s.(13) The group was originally comprised of Rafael Manriquez, Quique Cruz, Fernando Feña Torres, Ellen Moore, and Denis Schmit. Hector Sagado and Elizabeth Lichi Fuentes joined a year later.(14) Ellen Moore, the only North American in el Grupo, describes its purpose as a political project to spread awareness of the Dictatorship and to project Chilean music outside the country.(15) El Grupo met Pete Seeger at Winnipeg Folk Festival in 1980 and connected with his belief in music as a force for social justice. Ellen Moore remembers, “Quique asked if he would do a benefit for La Peña. 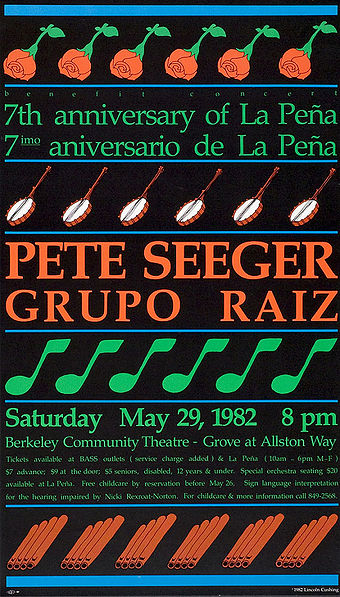 Poster by Lincoln Cushing, Docs Populi
He wrote back and said that he would, only if we performed with him.”(16) The joint benefit concert at the Berkeley Community Theater on the 7th Anniversary of La Peña kept the space open and thriving. Read about the New Song Movement, Nueva Canción, on La Peña’s website.

The Chilean solidarity movement dissipated in the late 1980s. As Latin American solidarity efforts shifted to the El Salvador and Nicaragua struggles, public attention on Chile lessened. Allies in the Chilean movement noted the particular challenge of the struggle, with no foreseeable end to the regime. Maintaining momentum against an indefinite oppressor proved difficult. Factionalism further complicated the continued fight, as Miristas and Unidad Popular supporters envisioned different post-dictatorship Chilean societies. “After 1990 [when the Pinochet regime was democratically removed from power], the community became less and less,” Nina Serrano recalls.(17) While La Peña’s emphasis has moved from radical Chilean politics to multicultural expression, La Peña remains an East Bay institution — a space for arts, politics, and culture.