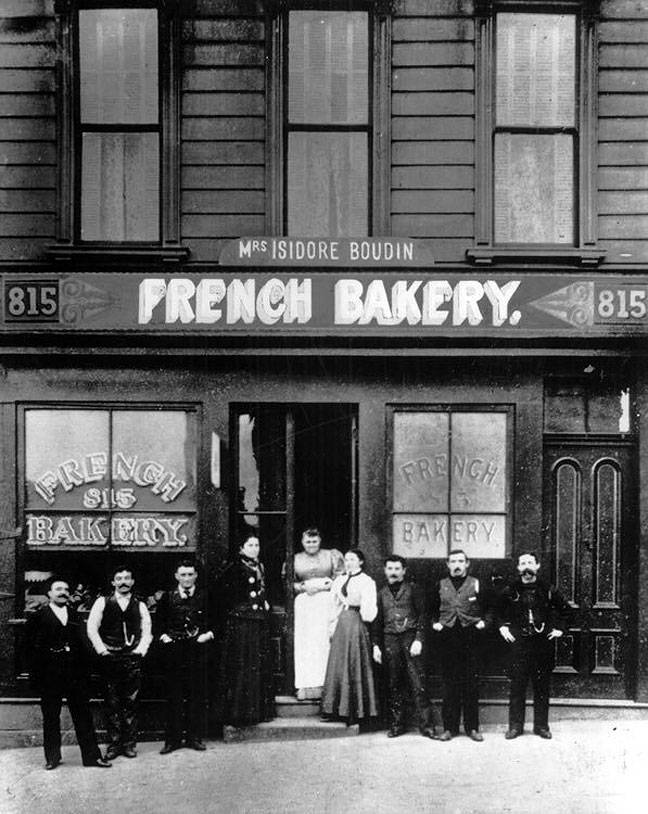 In 1849, Isidore Boudin, descended from a family of master bakers [1], immigrated from Burgundy, France to San Francisco, California along with other wide-eyed “forty-niners” to try his luck at prospering from the Gold Rush. Instead he struck a different type of gold. Intending on baking the sourdough bread from his classic French recipe, Boudin made one crucial change that would affect the history of sourdough and San Francisco: he used the starter culture containing yeasts that naturally grew in the Bay Area, which other Gold Rush miners were using to make bread at the time. [2] Little did he know that the fusion of his classic French sourdough recipe with the strains of yeast and bacteria specific to the Bay Area’s unique, foggy microclimate – later dubbed Lactobacillus sanfranciscensis – would be immortalized in his name.[2]

By 1852, Boudin French Bakery officially set up shop at its original North Beach location on 319 Dupont, or present day Grant Avenue.[1] Since then Boudin’s sourdough recipe has withstood the tests of time, including resisting the introduction of some commercially-available yeasts in 1868, and expanding to include home delivery of the sourdough by horse-drawn carriage.[3] When the great earthquake and fire struck in 1906, razing and burning large portions of North Beach entirely, the original bakery at 319 Dupont was destroyed, but miraculously, enough of the “mother dough” – the term of endearment bequeathed upon the original starter culture for a strain of sourdough bread – was saved by Isidore’s wife, Louise Boudin, to continue the business.[4] Boudin Sourdough Bakery’s new location in SF’s Richmond District, at 10th Avenue and Geary, is where the company resides today.[1] This is where Ansel Adams photographed Boudin for commercial advertisements in the early part of Adams’s career, before rising to fame as the great photographer of the American West.[5] His photograph of the storefront shows Boudin Bakery at this Richmond location back in 1931. 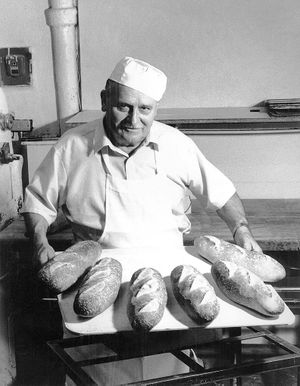 In 1941, a new master baker Steve Giraudo bought the bakery from the Boudin family. His dedication to the business, which manifested in daily operation checks, pioneered Boudin Bakery to grow into the empire it is today, and gave him a reputation as “the sourdough king.”[6] The present day 30,000-square-foot Fisherman’s Wharf location was opened in 1975, where a daily 20,000 pounds of bread is output, to this day—all of various sizes and shapes—not to mention the accompanying retail market, 250-seat café, museum, and bistro.[4,7] Although Boudin has largely survived as a family business, it has also survived a brief stint with corporate ownership. The 1983 merger with Oakland-based Colombo Baking formed the San Francisco French Bread, Co. together with other brands like Parisian, Toscano, and Colombo. It was then bought out by Specialty Foods of Illinois in 1993.[7,12] However, this brush with corporate ownership was short-lived as ownership passed back to the Giraudo family a decade later, with the dissolution of Specialty Foods. Despite this short time in corporate ownership, Boudin’s commercialization was one factor that allowed the company to be established in San Francisco as not just a family-owned business, but a must-see tourist stop. After the death of master baker Steve Giraudo, Jr., Fernando Padilla – Boudin’s current master baker – runs the lucrative business, with offshoots all over California, including a site in Disneyland, where visitors can get a tour of how sourdough is made.[7]

Through years of savvy leadership (including its time in corporate ownership), Boudin sourdough has grown to be considered a city staple of San Francisco. According to Padilla, Boudin ranks up with Coit Tower, the cable cars, and the Golden Gate Bridge as one of the most distinctive elements of the city. In an interview, while rolling dough through his hands, Padilla said “Boudin sourdough right here at the Fisherman’s Wharf is iconic. It’s San Francisco history. If we run out of it, we shut the doors.”[4] Because the strain Lactobacillus sanfranciscensis is unique to San Francisco, the taste of Boudin’s bread can’t be found anywhere else in the world, confirming the city’s status as a (quite literal) breeding ground for innovation. 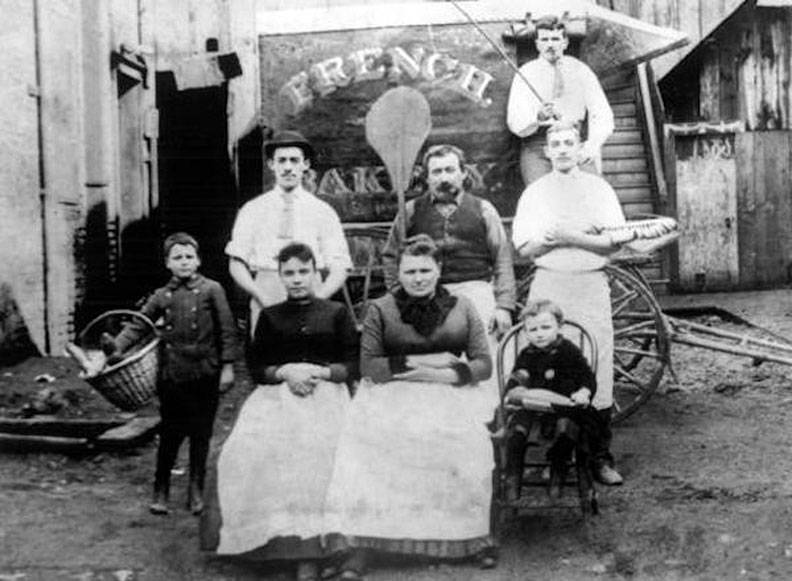 Since sourdough’s introduction to Northern California over 160 years ago, the bread has undergone a huge transformation from mere means of sustenance to a luxury food. Over these years, the company has had to adapt and transform with the times in order to keep its demand high. A tradition dating back to the Ancient Egyptians in 4000 BCE, making sourdough starter culture entails fermenting a mixture of yeast and bacteria by feeding it flour and water; it’s this live culture that’s crucial to giving sourdough its tangy flavor.[8] As a result, a large amount of care and nurturing goes into “feeding” the mother dough, or starter culture. How, with this time-intensive process of painstakingly nurturing this batter, has Boudin been able to remain unchanged within the fluctuating corporate climate for all these years? Of course, some of the events that perpetuated the company happened fortuitously – like Louise Boudin’s saving of the mother dough from the 1906 earthquake – but others were more purposeful.

Throughout the years, Boudin has managed to balance changing with the times to stay commercially relevant while also maintaining loyalty to the original technique established during the Gold Rush. When Fleischmann’s cake yeast was introduced to the baking industry in 1868, prodding bread recipes toward incorporating this ready-made, easily-available yeast into their recipes, the Boudins refused to conform.[9] However, when the industry made a switch to delivering bread by truck instead of by horse-drawn wagons in 1900, the Boudins readily followed suit. In the 1960s, the introduction of chemical dough conditioners – or chemicals like emulsifiers that improve processing conditions when added to bread formulations – allured the bread industry with promises of high-speed production and convenience. But trusty Steve Giraudo, staying true to the Boudin family’s insistence on authenticity, kept the original fermentation process.[10] Even when expanding to other locations to meet high demand, great care is taken to transport and preserve the mother dough, which can be seen as Fernando Padilla himself transports Boudin’s mother dough to the new Sacramento location on its opening day. Hearing how Boudin dealt with changes to the bread industry adds rhyme to reason for why the company today holds a somewhat paradoxical view in our minds: on the one hand, a highly commercialized, cheesy tourist attraction, on the other, the finest, most authentic sourdough bread in the Bay Area.

Rigidly sticking to an antiquated recipe, lengthy fermentation process, and 160-year-old starter culture seems out of place for a company based in trendy San Francisco – where solar powered bus lines, health trends, and budding tech startups reign supreme. However, the refusal to conform to America’s “mechanization” of bread was itself an act of rebellion, fitting SF’s reputation as a place where lack of conformity is celebrated.

We first see this clash between the city’s fascination with artisanal foods and the allure of processed sustenance during the 1915 Panama-Pacific International Exposition (PPIE). One of the most popular exhibits in the Food Palace at the PPIE, Sperry Flour split its ingredients between churning out mechanically-produced perfectly uniform bread loaves (sans baker’s touch) and producing handmade “cosmopolitan” bread products.[13] While some were enraptured by the mechanized American bread products that were growing in popularity at the time, countless visitors at the PPIE completely changed their view on bread and food after experiencing the culinary wonders of bread from around the world, including European sourdough. 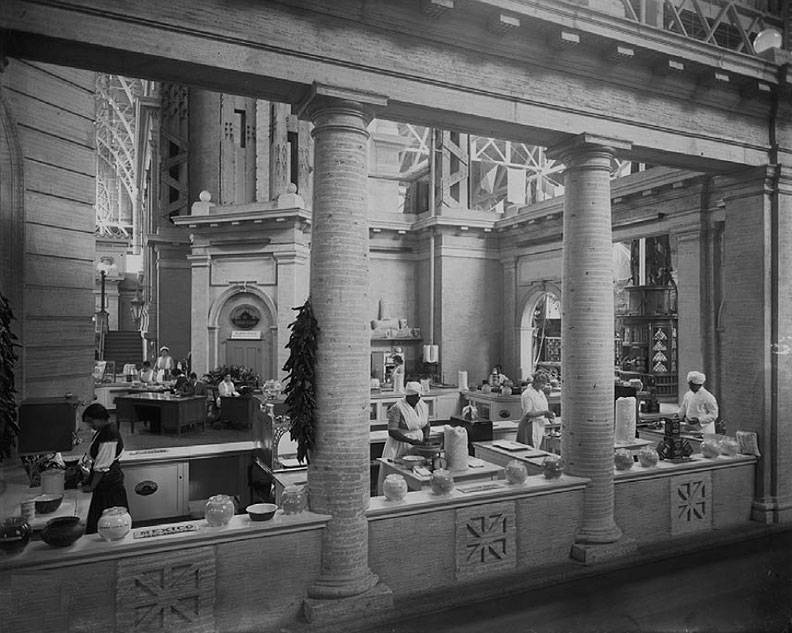 Sperry Flour exhibition at the Food Palace during the 1915 Panama-Pacific International Exposition.

This battle between artisan and machine grew into the biggest catalyst of the growth and success of Boudin’s original recipe over time: the country’s artisan bread movement, for which San Francisco was Ground Zero. After World War II, Americans were largely consuming packaged, sliced loaves of bread that were mass-produced, with the chemical conditioners and commercially-available yeasts that the succession of Boudin master bakers staunchly fought to avoid.[11] However, Bay Area residents in particular, inspired by European breads, began to experiment with this artisan style in the United States. The most prominent example at the time was the Acme Bread Company. Created by Steve Sullivan while enrolled at the University of California, Berkeley, Acme sourdough used a starter culture with wild yeast from wine grapes of the Bay. The wheatier, mildly sour flavor is distinct from that of Boudin, but Acme “launched an artisanal bread-making revolution in the 1980s” [8] – popularizing breads from companies like Boudin, Chez Panisse, Sour Flour, Della Fattoria, and bringing artisanal loaves into mainstream American culture. Despite San Francisco’s startup culture, which dictates that the new swiftly uproots and replaces the old, the founding of these new artisan bread companies didn’t replace Boudin, but actually strengthened the company’s hold on the Bay Area’s palette for years to come.

The original Boudin family started a fight, a fight to maintain tradition, despite a rapidly-changing industry and a rapidly-changing world, based on what tasted undeniably good. Passed on through the chain of master bakers in the company, the fight was eventually adopted by the Bay Area in its Bread Revolution, and eventually by the rest of America in its movement toward artisanal bread. Gaining advocates in this fight toward good-tasting bread for the past 160 years is how Boudin has been able to sustain its business model in a city hell-bent on scrapping the old in exchange for the Next Big Thing. That’s why, in a strange way, Boudin San Francisco Sourdough Bakery has become both the city’s biggest symbol and its biggest rebellion. 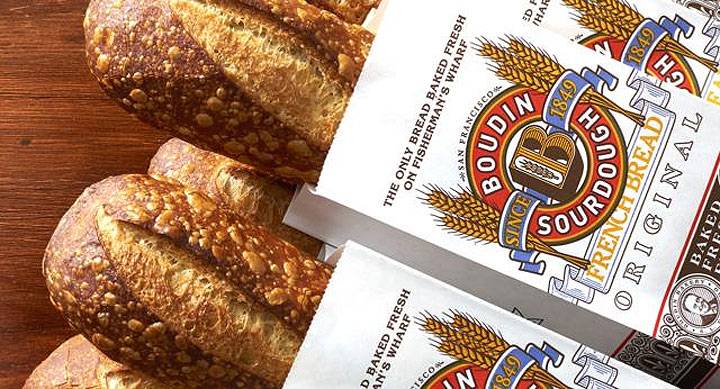 [5] Hamlin, Jesse. “Raise a Toast to Ansel Adams. Sure, He Was Known for Landscapes, but There Was More to His Portfolio, as These Bar Photos Show.” SFGate, San Francisco Chronicle, 15 Jan. 2012.