“WEAP’s demand for economic justice is to break isolation and fatality, and to show that poverty is the result of structural oppression and domination.” – WEAP Social Justice Handbook

“To focus on the experiences of women is not to exclude others, but to shine a light on the most glaring manifestations of poverty. The first step of healing is to bring out these stories, not separately from one another, but connected in our common cause.”
– WEAP Social Justice Handbook

Catalyzed by the first onslaught of official “austerity”(1) legislation enacted under President Ronald Reagan in 1982, three hundred and fifty women from across California convened to analyze and give name to what they considered critical economic, social, and political dynamics conditioning exclusion and deprivation among their communities. These women’s efforts produced the Women’s Economic Agenda Project’s initial agenda, focused on challenging dominant discourses often used to shame marginalized groups, as well as educating and training people to struggle for a different reality.(2) Founded in Oakland, CA in 1982, WEAP has continued to organize primarily low-income women, people of color, and workers towards defining an alternative economic vision.

That WEAP was developed in Oakland, a geographic site across which post-WWII segregationist housing policies, lack of fair employment provisions, and profoundly biased forms of social insurance influenced the concentration of communities of color within particular spaces, raises questions surrounding from what sorts of deeper historical legacies and circumstances did the organization draw insight, contention, and impetus.(3) WEAP must be situated in light of a broader trend among working class women in the paid workforce during the early eighties who had begun demanding increasing political rights.(4) To understand WEAP’s formation also means to engage with a longer Bay Area history including activists, workers, and community members such as Milo Smith (the founder of the Older Women’s League), Dezie Woods Jones (the past Director and President of Black Women Organized for Political Action), and Elaine Zimmerman who directly informed the organization’s mission, development, and organizing strategies.(5) 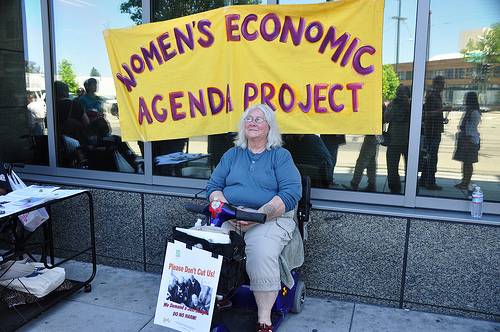 Early efforts by WEAP included aiding actions by mothers on welfare in the face of planned cuts, unions pushing for improved working conditions, and healthcare professionals opposing closures of clinics and advocating a universal health care system.(6) From its inception, the organization recognized the importance of connecting people across different struggles to foster common dialogue and strategic collaboration.(7) Some of whom have included leaders in churches, unions, community centers, recovery houses, university campuses, and neighborhoods brought together through gatherings and actions held on the streets and under bridges, in living rooms, classrooms, meeting halls, and shelters in rural, suburban, and urban areas across California.(8)

Over the past thirty-three years, WEAP’s vision, projects, and organizing methodologies have undergone transformation. As proponents of market fundamentalism in dominant U.S. institutions have continued to pursue policies which generate increasing inequality, poverty, privatization, commodification, and austerity, WEAP’s work has shifted to primarily focus on building a “transformative social movement to place human rights above profit.”(9) Engaging expressly with a “human rights strategy”(10) for more than a decade (since 1995, the organization has promoted the human right to healthcare), WEAP has aimed to make visible human rights violations, demand a new social contract founded on essential human rights, and bolster social mobilization around issues such as healthcare, housing, living wages, education, the environment, poverty, jobs, and immigration.(11)

In March 2006, WEAP and its Allies hosted the first ever Western Region’s World Courts of Women on Poverty in the United States in Oakland.12 The “Citizen’s Hearing and Truth Commission on the Healthcare Crisis” created a unique space for sharing stories “not only of pain, but also of courage and survival.”(13) The personal testimonies and hearings are part of a broader human rights project to produce forms of knowledge that can “help to question, transform, and initiate alternative thinking, institutions, and instruments which seek to address the violation of women’s human rights at regional, national, and international levels.”(14) The World Courts of Women culminated in 5 Resolutions of Action, designating and elaborating five core issue areas around which crucial anti-poverty organizing efforts are to be focused – Jobs, poverty and immigration; Foreclosures, homelessness, and property rights; Health care for the 99%; Organizing for a quality public education; Environment and the justice system.(15) 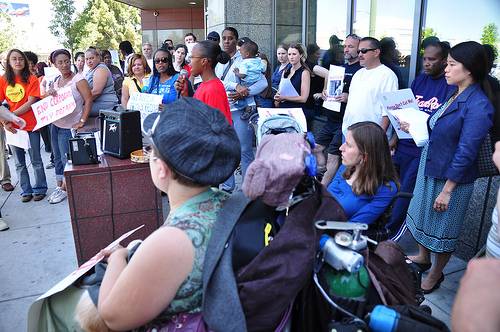 WEAP envisions its current work as closely related to the measures and ideals embodied by the Five Resolutions of Action.(16) Its three-pronged organizational strategy encompasses a campaign for the establishment of a human right to healthcare, an education program, and skills and leadership training for “building leadership among primarily low-income women-of-color and their families.”(17) In seeking to cultivate a movement to end poverty, WEAP has remained committed throughout its history to acknowledging and highlighting the crucial experience, insight, and dynamism that working and poor women can contribute towards combatting economic insecurity and struggling for economic justice.