adapted from the historic marker on the Embarcadero at Levi's Plaza

“The jungle, just a littered lot with old chairs and debris scattered about, has been astonishingly transformed. Little buildings have arisen for storage of supplies, housing of assistants, shower baths for men.”
—San Francisco Call, June 13, 1932

At right rear is the Italian Swiss Colony warehouse. This site is now the Levi's Plaza in the early 21st century. 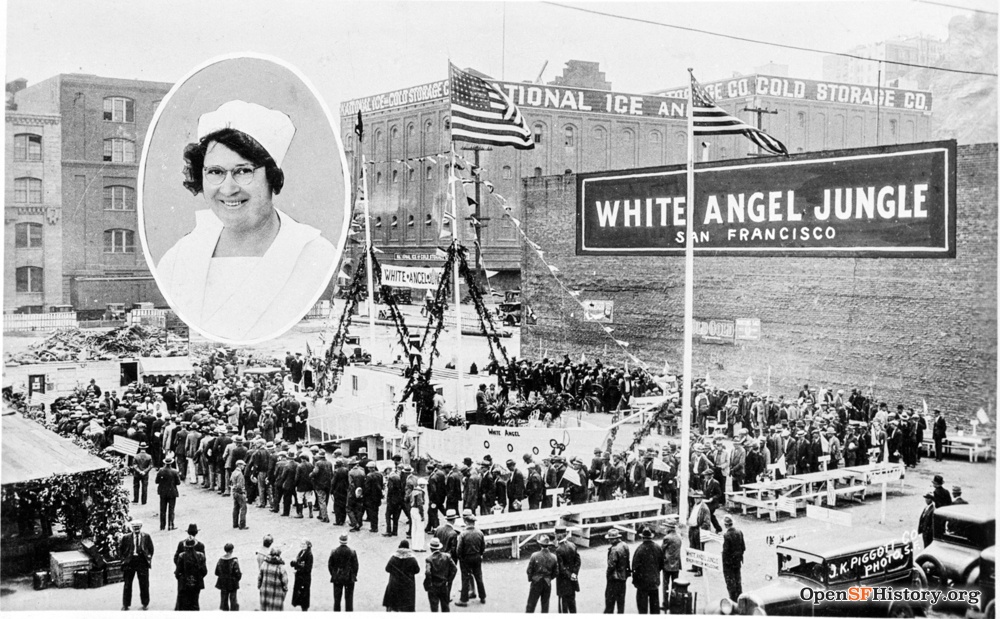 c1932_View of White Angel Boat and bread line. Inset portrait of Lois Jordan. White Angel Jungle was a relief project from 1931 to 1933 during the Great Depression. National Ice and Cold Storage Co. buildings in background.

It was westering and westering. And when the old men came to edge of the continent and saw they could go no further, they broke down and wept. Down and out on the waterfront in Frisco. The end of the line. Out of work. Out of food. And out of hope. San Francisco—at the end of the line—had always had more than its share of transient men, on the move, looking for work. During the Great Depression of the 1930s, the sheer number of people without homes and without food overwhelmed the city’s many charities, as bread lines wound around city blocks, and each day, soup kitchens fed one hot meal to thousands, who otherwise would not survive. Here at the foot of Telegraph Hill, from June of 1931 through September of 1933, one woman carried out her own plan to help. Her name was Lois Jordan; the soup kitchen she set up on Abe Ruef’s junk-filled lot, bounded by the Embarcadero and Battery, between Filbert and Greenwich, became known as the White Angel Jungle. “Seamen without ships, longshoremen with no cargo to load, railroad men out of jobs, carpenters with nothing to build… penniless and friendless in a big city, they have been fed, clothed and mothered by Mother Jordan.”
–San Francisco Call, June 13, 1932 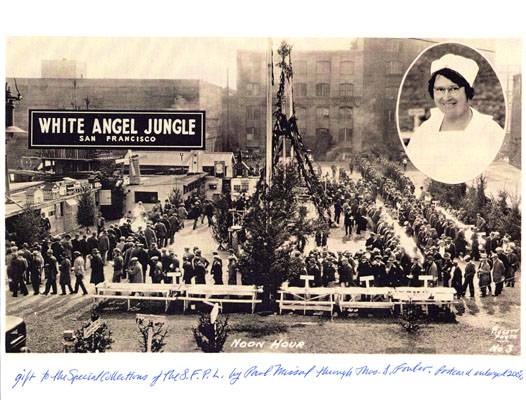 “What Does it Matter?” the hand-lettered banner read — “America’s One with the White Jungle.” Here, many groups of men ate together at trestle tables; each bore the sign: “Seamen” “Lumber Jacks” “Railroad Men” “Truck Drivers” “Longshoremen”, and each table sported gallon-sized tin cans filled with garden flowers. “Mrs. Lois Jordan has petted them and scolded them, given them stamps and stationery, and bidden them to write to wives, mothers, and sisters left behind in happier and more prosperous days. It is one of the sights of San Francisco to see Mother Jordan, in a snowy white uniform, stand at the head of a line that forms twice a day for the wholesome, simple home-cooked food she dispenses.” San Francisco Call, June 13, 1932. In the beginning, she cooked in her kitchen at home and delivered food to the waterfront; later, she fed two hot meals a day to hundreds—food, clothing, and money were donated to her waterfront office-kitchen, built by the men in the shape of a land-locked “rescue-boat” complete with bowsprit, masts and flag-bedecked rigging. The White Angel Jungle was not her only effort at direct help: next, she organized a free-farm for indigent families near Pleasanton, and when that effort collapsed in 1939, she operated the first and only community-owned grocery store at Hunters Point. Finally, she ran out of her own money, and the energy to raise funds from others. Lois Jordan died in the county hospital April 29, 1949.