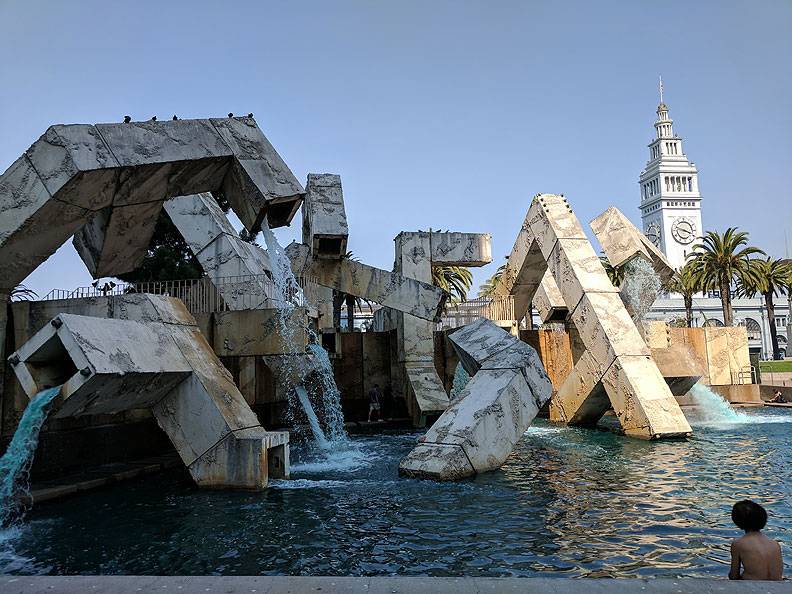 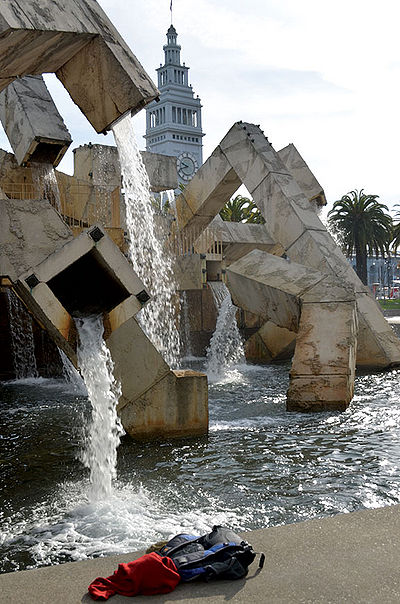 This 1971 structure, known to San Franciscans as the Vaillancourt Fountain, has not been universally loved. To the late Chronicle architecture critic Alan Temko, for instance, it resembled nothing so much as the droppings of a giant dog with square intestines. Other rather more sympathetic viewers see it as a very beautiful sewage outlet.

The creator of the work was the French Canadian politically engaged sculptor Armand Vaillancourt, who spent five years on the design and execution of this 40-foot-high, 710-foot-long work. On the night before the fountain’s dedication, he anonymously christened the piece with his own hand, scrawling “Québec Libre!”—Free Quebec!—on one of the fountains protuberances.

By the next morning, the graffiti had been removed. The vandal remained shadowy until, during the dedication ceremony, Vaillancourt emerged from the waters and began replicating his handiwork of the night before, this time explaining he was not defacing his sculpture, but making a “joyous statement.” “This fountain,” he said, “is dedicated to all freedom—Free Quebec! Free East Pakistan, Free Vietnam. Free the whole world.”

His local sponsors were not amused, and the sculptor left town in a hurry as furious protesters passed out leaflets attacking his work as a “howling obscenity” and a “perfidious eyesore.”

Over the years, the fountain, which runs up a $250,000-a-year electricity bill to pump 30,000 tons of water through its concrete limbs, has had its fans as well as detractors.

The environment in which it is set has been greatly altered. The work was juxtaposed to the Embarcadero Freeway, which some saw as an appropriate pairing: massive concrete against more massive concrete. When the 1989 Loma Prieta earthquake led to the demise of the freeway, the jagged sculpture remained nestled at the heart of what is becoming one of the great waterfront boulevards of the world.

In 2004, following a three-year drought that had mandated that the Vaillancourt remain waterless, some San Francisco politicians made the suggestion that the fountain be demolished, arguing that the structure was now out of place, expensive to maintain, and an attractive nuisance that acted as a sleeping shelter for the homeless.

Armand Vaillancourt reacted predictably, saying, “They have no right to touch this artwork. I gave almost five years of my life to create that…I’m going to fight like the devil to preserve that work.”

As it turned out, city leaders reached a compromise and the fountain’s waters now flow—at least periodically—partially supported with private funds.

Excerpted with permission from Art Peterson's book, "Why Is That Bridge Orange?" published in 2013, by Inquiring Minds Productions.
Retrieved from "http://foundsf.org/index.php?title=Vaillancourt_Fountain&oldid=30933"
Share this page: