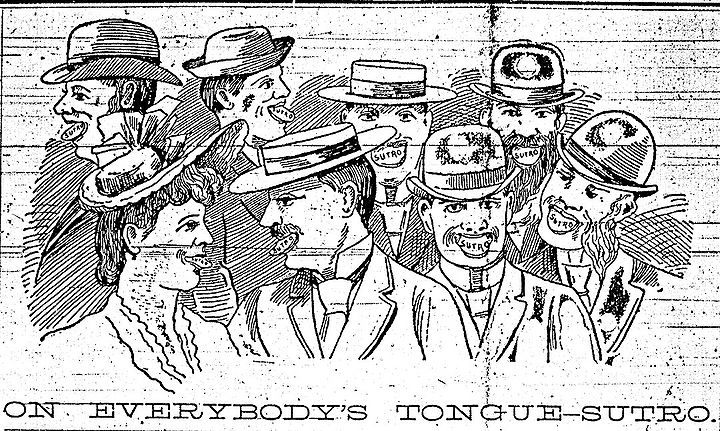 A cartoon from the Richmond Banner.

For 76 years, from 1894 to 1970, the Richmond District had its own weekly newspaper, The Richmond Banner. Back issues (on microfilm at the Sutro Library) provide a detailed history of the " great sand waste" with a population of a few thousand, which is now a major metropolitan district of over 80,000.

When the Banner began in September 1894, some locals mistakenly assumed it was only a temporary political campaign paper to support the election of the Richmond's richest resident, Adolph Sutro, who was running for mayor on the populist ticket.

After Sutro was elected, the paper continued to champion a variety of local causes, knowing full well that it had an ally in City Hall...

J.H. Bond, the first editor of the Banner, was a colorful but paradoxical writer. On one hand, he would rail against the "dank weeds and decaying headboards of the Lone Mountain Cemeteries, and the foul water of the Spring Valley Water Works," as well as the "bad sanitary condition of the Sutro Primary School." On the other hand, he would rhapsodize about the "unexcelled location of the Richmond for a home."

After only two years, Bond passed the Banner to Walter T. Lyon, "a practical printer and thoroughly experienced newspaperman."

Lyon was, perhaps, a bit too practical. He changed the Banner so much that it lost its emphasis on the community. Richmond District news was cut back and relegated to inside pages.

Summaries of state, national and international news were carried on the front page, perhaps in hope of competing with the San Francisco dailies...

Community news once again occupied the Banner's front page in 1922, when Sinclair Trimble, who began working on the paper in 1907 as a "printer's devil," became editor.

At the height of its popularity the Banner had 5,000 subscribers, but was supported primarily by advertising.

In 1964, Trimble died. The Banner was published until 1970, by his widow, Francis, who wrote a weekly column titled, "The Northwest Corner."

Masthead from the Richmond Banner