from a National Park Service brochure 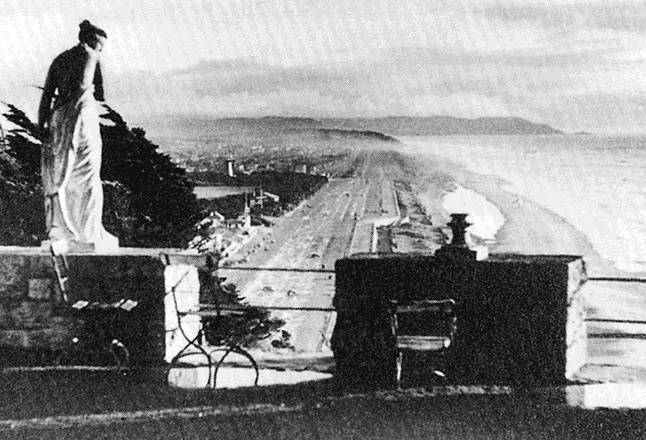 A Sutro Statue, looking south along the Great Highway.

Sutro Park provides the setting for one of the strangest buried treasure stories around. Only in this case, instead of gold, silver and jewels, the "treasure" consists of more than a dozen grecian-style statues that are supposedly buried somewhere in the Park. 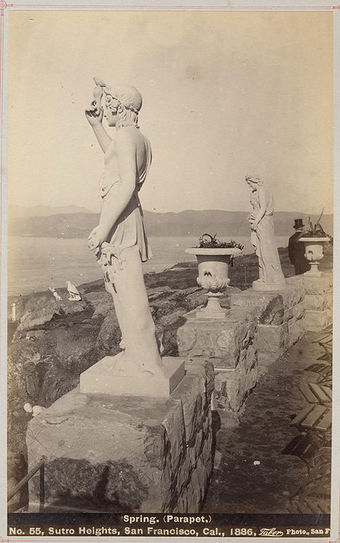 The story began in February, 1865, when a tobacco merchant and visionary engineer named Adolph Sutro approached financier Billy Ralston with a mad scheme: Sutro proposed to construct a seven-mile-long, two-thousand-foot-deep mining tunnel from one end of the Comstock Lode to the other. Ralston liked the idea; soon Sutro was touring the country, whipping up political and financial support for a project so improbable that the Gold Hills News (1869) called it "one of the most infamous and barefaced swindles ever put forth in Nevada."

The Sutro Tunnel, finished in 1878, was a financial bust for everyone but Sutro, who had secretly sold his stock just before it was completed. Sutro had known what the others didn't: The Comstock Lode was played out. Still, it was a hell of a tunnel.

Sutro retired to his mansion in what is now Sutro Park. In the 1890's he was elected Mayor of San Francisco. Somewhere along the line, he began acquiring the statuary which he placed along the oceanside rim of his property in a quixotic effort to bring classical high culture to the masses.

After Sutro's death, and his mansion's destruction, the statues were left in place along the rim of what became Sutro Park. Sometime during World War II, the statues disappeared, never to be seen again. What became of them?

A former Sutro Park gardener told historian Arthur Chandler that during World War II, the statues were buried at an unmarked location in the park. The reason? The authorities were afraid that the row of statues would make inviting targets for gunners aboard Japanese submarines! After the war, nobody bothered to unearth them, and eventually the location of the statues' burial was forgotten.

Apparently the mysterious statues still slumber somewhere beneath the ground of Sutro Park, awaiting the urban archaeologist who will, perhaps, one day decide to dig them up.

John Martini says there’s a lot of lore around this. His comments:

Historic photos show that up through the early 1960s there were only two or three additional statues extant: Venus de Milo and Satyr’s Dream. Most statues disappeared starting 1942. The story of burying them is a possibility, but not because they were submarine targets. The Cliff House was a much better and more visible target than tiny statues on the Parapet.

There’s an area near the gazebo that we suspect might have been a burial pit for statues. During Adolph’s time it was a sunken flower bed. Now it’s almost level. Broken statues might have been included in the fill. Supposition, though.

Bottom line, no one has found official documentation about the fate of the statues. While we can trace their continued disappearance through historic photos, there are only second-hand stories about them being removed/buried.

A 27-year Recreation & Park Dept gardener has another account:

Around 2005, one of my older crew members had been on Gardening crew at Sutro's Park when the S.F. Rec & Park still had it (This was eons before G.G.N.R.A). The following is what that particular City Gardener told me about the existing statues (approximately early 1970's) in Sutro's Park: The statues where always being vandalized. Very messy & time consuming to clean up for the City gardening crew. And dangerous to have broken statuary all about in Sutro's Park. Therefore, S.F. Rec & Park crew boss decided to have his City gardeners dig a big hole at base of each statue and just topple each statue into the giant hole. Each toppled statue had soil placed on top. All statues were buried except the Stag & Dianna. No fuss, no hauling away; buried and problem solved! Gardener that did this work said to check old photos of Sutro Park when Sutro lived there: all statues buried right in front of where they stood. The reason they buried the statues in place, was that it was far less hassle to bury them, than to haul them away. No work order of Rec & Park to have a winch truck pick them up and cart them away. No work orders made meant no questions asked.